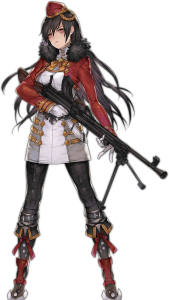 Bren is a 3-star MG with an unimpressive statline, low clip size, and the awful Lock and Load skill. Her tiles don’t do much for SGs. In short term battles neither her firepower nor skill make an impact. From second volley and beyond she still is very unremarkable due to her low rarity multipliers.

For commanders looking for budget options, better examples for MGs would be M2HB and LWMMG for upfront damage. For 2nd volley MGs, M1918 “BAR'' is given for free. So, probably shouldn’t use Bren.

MICA’s attempt to improve an awful MG, which is unsurprisingly underwhelming.

Bren Mod’s first neural upgrade provides the majority of her stat increases, taking her base Firepower stat to actually really good 96 by level 110. The usual skill improvement and tile improvement also come, but extra accuracy and 1 more round on skill are not as important.

Her skill 2 upon unlocking mod 2 is often considered to be the accuracy version of Negev, since it stacks additional accuracy and clip size after each reload, up to a maximum of 3 stacks.

Bren Mod’s mod 3 speq gives a boatload of firepower and accuracy and crit, probably to make up for how shit her base was.

So, if it wasn’t clear already, Bren Mod is an accuracy focused MG. Like, incredibly accuracy focused. Her skill 2 gives about a 52% accuracy increase at full stacks, but gives almost nothing in terms of raw DPS.

But as always, there are no fights where this would be remotely applicable. MGs should not be fighting evasive enemies in the first place, much less for long enough for Bren Mod to reload 3 times. Since she’s increasing her clip size each stack and her skill 1 Lock and Load also increases her clip size, the time it takes for each reload takes longer and longer. Even evasion-focused and high-hp enemies that drag the fight for a long time like Patrollers, where she should be specialized, have so much evasion that Bren’s final accuracy is laughable.

Her Lock and Load skill still gives a pathetic 30% firepower bonus, so her high firepower stat combined with extra from her special equipment would be her only contribution. In that sense her stopping point for neural upgrade would be mod 1, but if anyone is going to invest into her that much, they could just use other MGs that still completely outperform her like Lewis, or RPK-203.

Seriously don’t raise this unit, much less mod her.

31 base accuracy is relatively high for an MG.

It takes a long time to kick in due to its initial cooldown and it is not even the best 2nd volley skill. Lock and Load is an absolutely garbage skill, and with 3-star multipliers it’s really awful.

97 firepower at base. With special equipment that reaches 102. Or use a regular EOT for 105 I guess. This is really really high for an MG. A shame it’s on Bren Mod.

34 base accuracy. With her special equipment, Bren Mod hits 64 accuracy at base, beating out most ARs and even some RFs. At maximum stats she reaches a ridiculous 97 accuracy.

Bren Mod’s stacks provide accuracy and clip size. One is usually useless for MGs since they wouldn’t fight anything that evasive, much less for that long. The other actively slows down Bren Mod’s stacking speed.

Reaches Full Potential After You Die of Old Age

To reach maximum stacks Bren Mod has to reload 3 times. And this is an MG that increases her own clip size in two different ways and forces her to shoot longer before being able to reload, so any fight should be long over by then.

Despite all her methods of jacking up her ammo count, Bren Mod’s base clip size is still a miserable 8, so she makes a very small impact on the first volley.

Since MGs work with damage, and Bren is a 2nd volley MG, that means she should work better with damage buffing skills.

Tilebuff synergy. Tanks for the team.

The Bren light machine gun made its mark in history as one of the primary weapons of the British army in World War II, serving as a low-maintenance replacement for the Vickers MG. Recognized for its uniquely designed top-loading magazine system and portability, the Bren gun served British forces for over forty years in theatres of war around the world.