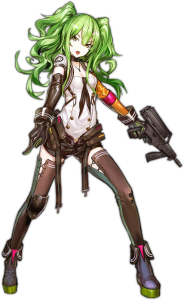 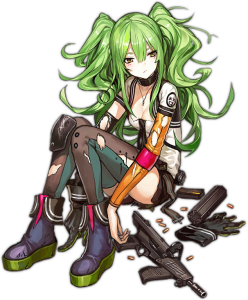 M950A (Calico) is one of the very few Rate of Fire buffing HGs available in GFL, facing competition from only Astra, Five-seveN, and Stechkin in this niche. Astra competes with M950A as they are both tile-5 buffers, although to call this a competition isn’t terribly fair, as M950A outclasses Astra quite thoroughly in every aspect, making Calico a desirable core feature in many RF/HG Echelons.

The 30% RoF/50% Accuracy Tile Buff is more relevant than ever in the post-Isomer meta, particularly due to the modern trend of non-zero Evasion enemies at night (looking at you, Ranking maps). When combined with her 25% RoF buff Skill, M950A’s kit can be considered GFL’s best all-in-one RoF boosting package.

M950A’s biggest drawback is her inflexible tile layout, forcing her placement in position 5 in most echelons. The fact that she’s not the most survivable of HGs doesn’t help either - you’ll need to kite well or provide HP shield support to her for prolonged fights.

M950A Mod offers three major advantages over her base self: an appropriate selection of buffed stats, a much-improved tile formation, and finally her incredible Skill 2.

Stats-wise, M950A gets the biggest buff from Mod 1 and 2, gaining 20 base HP and 8 Evasion. This is a significant survivability buff all on it’s own, along with a few assorted points in other stats.

In terms of Tile Buffs, M950A only picks up a tiny bit, now providing 32% RoF and 60% Accuracy. More importantly, she now covers all three tiles behind her, opening up flexible positioning considerably, and allowing M950A to function alongside Dolls such as HS2000 without any drawbacks, or provide an extra appreciated RoF buff to Python if both are used in the same team.

Soul LIVE! meanwhile, is the star of the show. This Skill comes in two parts, depending on the map location.
If on an allied node (blue on the map), Calico creates a debuff zone at the far edge of your Echelon’s engagement range as soon as Calico stops moving. As enemies enter this zone, they suffer a penalty to Evasion and move speed, with the movement speed debuff giving your echelon potentially more time to mow down enemies before they get in range to attack you. This debuff persists for six seconds after an enemy receives it, which is generally enough time for the RFs to seal the deal on the battle.

Soul LIVE! provides an entirely different effect when engaging on enemy-occupied or neutral nodes (this includes battles in non-map encounters like Theater).

Step 1. M950A opens the battle by providing a small RoF buff to her allies. While small in magnitude, this buff serves to provide a small early kick to DPS and can even trigger Python’s passive for a compounding effect.

Then, M950A buffs the movement speed of all friendly units. RFs with Capes will move as fast as an SMG and all other Dolls run as fast as Handguns. This eases kiting considerably, lets you run up to faraway enemies like Recce Centers faster, and generally makes in-battle movement of RFs a snap, making micro intensive battles considerably easier (dodging Typhon lasers with RFs, anyone?).

For those readers looking to the future and salivating at the thought of 416, G11 and RO635’s Neural Upgrades, don’t worry! Even if you do want to play with M950A Mod, your FCCs are not in mortal danger, as M950A receives the largest bonuses by Mod 2, getting the full HP boost and all but 1 point of Evasion, and her Special Equipment is not really enough of a boost to be worth investing fully into, given the 5 FCC cost. You could always Mod 3 for her new art, though - that’s probably the best part.

Damaged
The Warbler And The Rose

M950A’s Assault Command Skill provides the best-in-class Rate of Fire buff out of all standard HGs.

M950A’s impressive 30% RoF 50% Accuracy tile remains one of the premier Rate of Fire buff tiles in the game, even years after her initial release. Now that the number of evasive enemies at night has increased significantly (e.g. Theater Core 8 Uhlans, Doppelsöldners in Isomer Ranking, etc.), the Accuracy component contributes significantly to team DPS.

While M950A‘s HP pool is decent, her Evasion is on the lower end, which makes her not very durable for the tile 5 maintank position she tends to find herself in.

M950A ‘s X tile layout unfortunately limits her team building options, relegating her to Position 5 for optimal usage, or only being able to buff one DPS in unconventional team layouts such as ones involving HS2000.

Now covering the entire backline from Position 5, M950A marches closer and closer to becoming a plug-and-play HG that’ll work when added to any formation you wish.

Soul Live!, M950A’s Skill 2, offers a variety of extremely versatile buffs/debuffs depending on the location on the battlefield. The effects are strong and uniquely only available from M950A - making her an almost mandatory pick if you want to run certain team comps.

M950A’s Neural Upgrade offers up just what she needed in terms of stats, in a solid survivability boost from HP and a sizable boost of Evasion as well.

As a 6* Mod, M950A’s does require some of your precious Fire Control Cores, and piles upon piles of Dummy Cores and Memory Fragments. This makes performing this Neural Upgrade a serious investment even for long time players, so think carefully about how you intend to use her before doing so, and weigh the cost against what other Neural Upgrades you might want to do in the future.

M950A’s usage is fairly simple. Place her in position 5, situate the DPS on Positions 1 and 7, and add whatever other HGs the formation desires.

Much like her regular self, M950A’s Neural Upgrade slots into RF formations without any issues. Now, however, she can also pair with HS2000 (who forces the RFs to stand next to one another) without having to forego buffing a DPS.

The Calico M950 was a very innovative and unusual weapon for its time. Its most unusual aspect was its detachable helical magazine which was mounted on the top of it. Even though the Calico M950 was a unique and almost revolutionary weapon, as it had many issues regarding its stability no country adapted it nor did it see commercial success.