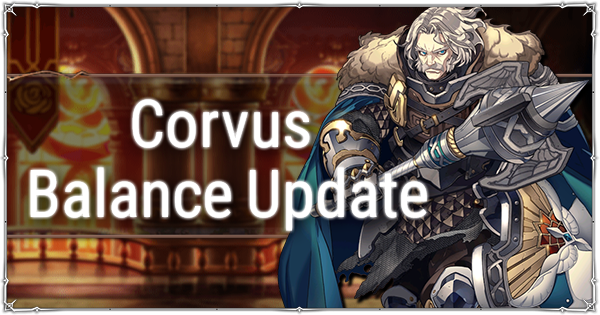 Poor old Corvus was the target of some rather painful changes.

But don’t relegate him to that walker just yet!

SG is trying very hard to not destroy him completely (kudos to SG for doing this.)

Of course, they don't like the fact that his healing/turn cycling can feel downright oppressive, so they're hurting his reliability a bit.

That being said, let’s walk you through his changes:

His special DEF buff on Awakening (S3) was nerfed from 60% to 30%. That value was instead turned into a somewhat awkward 30% Effect Resistance and given a new name, “Rage” (which is probably what some Corvus users are feeling right now). It can’t be removed, though this is just a visual update (it was never vulnerable to dispel).

You MUST use Macerate (S2) to generate 30 FS, or you likely won’t reach a second Awakening.

Now it’s much slower and partially gated by his S2 cooldown.

While you can reach the first one easily, the second/successive ones are harder to attain.

... and then more turns/getting hit before reaching the next AWAKEN

What did this all mean?

Corvus’ highs are still near the same as before when Awakened, but he takes longer to ramp back up after the initial S3 (an extra 2 turns on average). He is shoehorned into using his somewhat mediocre S2 to generate Fighting Spirit, and his average damage is also reduced due to lower overall DEF scaling.

He’ll have trouble getting it up in long fights. It sucks to be old. (#｀ε´)