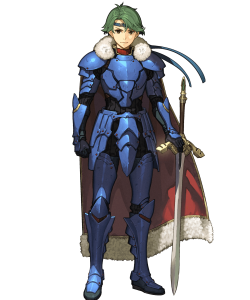 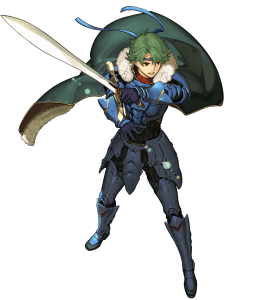 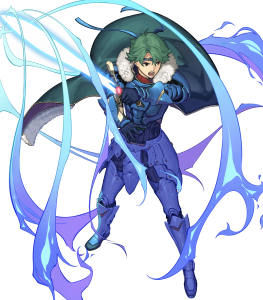 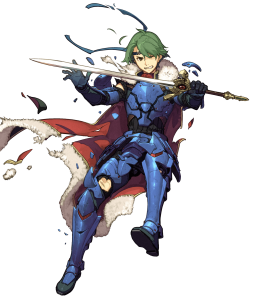 Brave Alm is a powerful frontline sword infantry with respectable stats almost entirely across the board. He boasts decent HP and Speed alongside fantastic Attack and Defense, though base 20 Resistance leaves him vulnerable to magic attacks. These impressive stats, combined with his arsenal of unique skills, make him a formidable hero who can deal tremendous damage.

The Dracofalchion and Scendscale are what set Alm apart from similar sword infantry. His weapon grants an additional +3 Attack, effective damage against dragon foes, and a powerful +5 boost to all of Alm’s combat stats if he fights with more foes than allies within 2 spaces. On the other hand, Scendscale is an A slot skill which grants 25% of Alm’s Attack stat as bonus true damage to each of his attacks, while damaging him by 7 after initiating combat. Both of these skills are incredibly powerful, and position Alm as one of the most threatening opponents when it comes to melee battles.

With that said, Alm isn’t without his drawbacks. Though Alm can easily cut down enemy dragons on Player Phase, he struggles to take any of their attacks on Enemy Phase. The same can be said for mages, who will take advantage of his low Resistance to OHKO or 2HKO Alm with ease. Alm generally struggles against most ranged opponents, but due to the impressive advantages of Scendscale it’s rarely worthwhile to sacrifice this skill in favour of Distant Counter. Nevertheless, Alm is an incredibly capable infantry hero who offers near unrivalled offensive power.

“I’m here because I was called. I have a duty to perform, and I’ll perform it. No more, and no less.”

Alm wields impressive stats in every area except for Resistance. 38 base Attack before accounting for the additional +19 from his weapon, alongside 42 HP, 35 Speed and 37 Defense turn Alm into a strong melee hero.

The Dracofalchion grants a variety of bonuses to improve Alm’s strength in combat. These benefits include +3 Attack, effective damage to dragons, and a potential +5 to all of his combat stats. This weapon allows Alm to deal tremendous damage when paired with Scendscale, and makes him a suitable counter to strong dragon heroes.

Scendscale offers phenomenal bonus damage thanks to Alm’s impressive base Attack, allowing him to punch holes in even the most defensive heroes. Opponents like Lukas, Surtr and Arden, infamous for their impressive base Defense, will struggle to withstand Alm’s blows thanks to this impressive skill.

As an infantry hero, Brave Alm has access to a variety of powerful skills. This includes, but is not limited to, Special Spiral, Wrath and Null C-Disrupt. This offers Alm fantastic versatility, allowing him to pick different skills depending on what build best complements his team.

Alm’s stats point towards one major weakness: his subpar Resistance. With only base 20 Resistance, Alm will struggle to take any magical attacks; especially if his opponent is able to make a follow-up attack.

As Scendscale is such an instrumental skill at Alm’s disposal, it’s difficult to recommend anything as a suitable alternative. This highlights an additional weakness: without Distant Counter, Alm cannot hope to combat ranged opponents on Enemy Phase, though opting for this skill comes at the cost of the immense bonus damage offered by Scendscale. Typically, Alm must do without Distant Counter.

This build is meant to paired with legendary azure &amp;amp;amp; legendary eliwood for their potential to increase all his stats +12

-if the builds team conditions are met this build with fury 4, gives Alm the potential for +21 to all stats. Needless to say this a devastating effect combined with his already high stats. Physical foes will pose nearly no chance. Even magic foes won’t find him easy.

-wrath + noontime seems like a bad combo, but in his case it’s actually a good one with fury being put into the mix. When noontime activates wrath’s +10 damage effect will make noontime still a damage dealing special &amp;amp;amp; recover slightly more HP. Combined with heavy blade he has impressive longevity.

If you manage to grab the other brave heroes (Eliwood, Micaiah, and Camilla), then this build is certainly for you. With the defaulted skillsets of each hero, Alm's role is a high powered attacker with a surprisingly decent to high amount of defense and speed, leaving resistance left. The fury give Alm a boost in stats, resulting in a VERY high set of stats like you saw above without blessings over unit merging. Since you'll take damage from Scendscale anyway, fury will help in terms of overall stat line up. Chill def makes things a hassle for your opponent, and the threat atk/SPDR synergizes your teammates. Then comes the Astra and heavy blade, which can sweep your opponents in the most satisfying way possible.

Optimal IVs: +ATK is already what makes Brave Alm great but with this build is what really helps make it so powerful. A -HP is the best that synergizes with this build to bring him down to Brash Assualt and Desperation range, but -SPD is also not the worst option. But the HP you want to be at is still low.

This is clearly just standard Desperation and Brash Assault build so let's quickly get out why Brave Sword. We don't care about the speed in this build but will get more damage if we are in our HP range. I can still see why you would keep his Dracofalchion, but then I would argue going with a more standard build.

The B skill Desperation is needed for this build, or it wouldn't be a Desperation and Brash Assault build. Making sure you make all your attacks before your foe can even touch is just strong to begin with.

For the seal there's not much more to say about Brash Assault, making sure we can attack twice, or in this builds case, attack four times.

His A skill is the reason I believe Brave Alm is the absolute best with this build. You deal 25% of you ATK as guaranteed damage. That is what makes this crazy with what damage you can do, even if you can't do any other damage. If you nothing in ATK it should be 46. 25% of that is 11.5, but rounds down always and would give 11 damage. Once Alm is in his optimal HP range then you will always do 44 damage. This kills even the strongest of blue units, or just under, but if you do at least do 1 damage, Winter Ephraim, Brave Hector and Legendary Tiki (Young) will all die. It's also not that hard to buff Alm, especially with his C skill.

His C skill makes him stronger when you make others weaker. It gives you +5 to your ATK if it triggers also adding more confirmed damage.

His special Luna will always go off if you quad attack so adding more damage to what you already can to help make sure you can kill more.

The assist skill can always be what you want it to be but Reposition is always a good pick. Help move unit further or get them out of the way. Something like Ardent Sacrifice to get rid of more of his HP works well too.

So in conclusion with even a zero merge standard brave weapon, desperation, and brash assault build on Brave Alm turns him into a player turn god killer. What Alm does better than anyone else with this build is thanks to his exclusive A skill. And with Alm's lower HP, it shouldn't be out of reach to get.

Optimal IVs: +Atk as a superboon is the optimal choice for an IV, as his damage increases even more with his A slot skill, +Def is also workable, giving him one of the higher defence stats in the game/ -Res is optimal due to his atrocious magic bulk, -HP can be either helpful or harmful as it lowers the amount of damage needed to reach his desperation threshold.

is A slot, Scendscale causes Brave Alms damage to scale with his Atk stat twice centring it as the main focus of this build. This ability also acts like wrath in that it lowers the HP of the user after combat, with Alm taking a considerable 7 non lethal damage after combat should he attack.

Brave Alms B slot of choice becomes Vantage, as He quickly loses enough hp to enter vantage range and with his incredibly strong attack he should be quite capable of OHKO&#039;ing almost anything that tries to attack him in this state. Desperation can also be slotted to synergise with his Sacred Seal.

His native C slot skill, Threaten Atk/Spd 3 allows for Alm to weaken foes nearby considerably, likely to greatly reduce any damage dealt to him.

Brash Assault is his S slot of choice to guarantee follow-up attacks and synergize with his quickly lowered health bar and to guarantee follow up attacks with his middling speed. If paired with Desperation, almost nothing should live through his assault, although this does greatly weaken his enemy phase potential.

His optimal Support choice for this build will be Ardent Sacrifice, in order to help him reach his desired threshold of 50% HP, should he need assistance with such a task

The Special this build runs is Reprisal, as his kit is centred around taking damage and this will allow him to quickly build up his damage potential.

This build has the distinct flaw of relying on a good amount of support, as once he has reached his 50% threshold it is fairly easy for him to die when lacking healing from another character. Due to his unique weapon, Alm will likely be fairly isolated in order to capitalise on his strengths so support will need to be flexible. Like all forms of Alm he cannot take magic damage and should be wary of even ranged physical units as he cannot counter-attack them.

Optimal IVs: +Atk as a superboon is the optimal choice for an IV, as his damage increases even more with his A slot skill, +Def is also workable, giving him one of the higher defence stats in the game/ -Res is optimal due to his atrocious magic bulk, -HP can be either helpful or harmful as it lowers the amount of damage needed to reach his desperation threshold.

His A slot, Scendscale causes Brave Alms damage to scale with his Atk stat twice centring it as the main focus of this build. This ability also acts like wrath in that it lowers the HP of the user after combat, with Alm taking a considerable 7 non lethal damage after combat should he attack.

This synergises well with his B slot, Desperation. While Brave Alms speed stat is far from incredible, with help from his C slot, Spd Smoke and the effect of his personal weapon, Brave Alm should be able to both double and OHKO almost any unit he attacks. Vantage can be slotted in the B slot if the speed disparity remains too large.

Brave Alms Sacred Seal is Renewal, as despite being incredibly sturdy when faced with physical damage ,his A slot skill still decreases his hp at a brisk rate.

His special, Noontime, is used in the mindset of keeping his hp fairly high, yet should not stop Vantage or Desperation from activating consistently.

His support skill, Pivot is used to get closer to any foes more quickly in order to capitalise on his unique weapon.

The Shortcomings of this build should be clear: Brave Alm *CANNOT* survive a magic assault. while sporting an incredibly high Defence stat, his Resistance is one of the lowest in the game, and his somewhat average hp for a Melee unit does little to make up for it. Additionally the use of Scendscale massively depletes the HP bar every time Brave Alm attacks. Finally the requirements for his unique weapon to activate its buff force him to place himself further from allied units making him more difficult to support than most infantry characters.