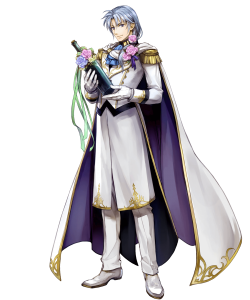 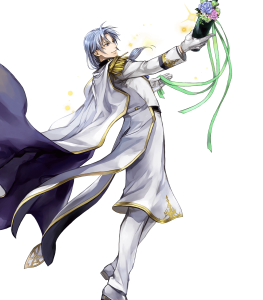 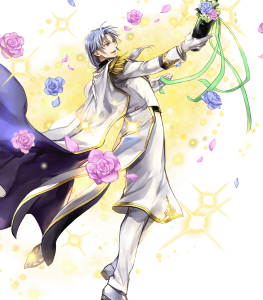 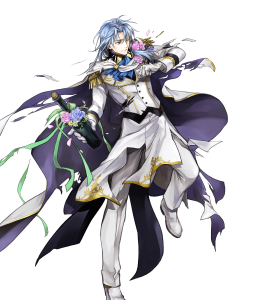 Either Attack or Speed will be the most beneficial Asset choices for Groom Pent in order to increase his offensive capabilities. Either Defense or Resistance will be the best Flaw choice.

As the intention is to defeat opponents in a single hit, Groom Pent’s best Asset choice for this set is Attack. Either Defense or Resistance will make for a good Flaw.

Making his debut in Heroes is none other than Pent, Count Reglay himself. Not in his typical attire though, instead wearing a fancy regal suit ready for his wedding with Louise. Groom Pent is a blue mage cavalier coming with good offensive stats and weak defensive capabilities.

Groom Pent comes with good Attack and Speed. When coupled with his strong default weapon, he can be quite strong when used offensively with little investment. However, his below average HP and poor Defense and Resistance means he cannot take a lot of punishment before he is defeated, thus restricting his usage to offensive play.

Unfortunately, Groom Pent does not do much to make himself stand out in the crowd of blue mage cavaliers. Spring Catria and L’Arachel, for example, both have similar offensive stats to Groom Pent except also come with personal weapons that enhance their capabilities. In the case of L’Arachel, she is also easier to obtain several copies of, thus making her easier to get merges for.

None of this subtracts from Groom Pent’s overall strengths though. Regardless of how much he differentiates from other blue mage cavaliers, he still possesses the stats necessary to be a strong offensive unit when given the right skills.

With 33 Attack and 34 Speed, Groom Pent possesses the stats he needs in order to be strong offensively. He can be made to deal great damage and have strong follow-up potential when enhanced with the right skills and buffs.

Being a cavalier, Groom Pent gets access to two main benefits. Firstly, he can enjoy a natural movement range of three which grants him great flexibility with how he wants to approach certain scenarios thanks to the extended reach. Secondly, he can also enjoy Cavalry buffs which are a quick and cheap way to give him a large number of buffs.

With 37 HP, 19 Defense, and 24 Resistance, Groom Pent’s defensive capabilities leave a lot to be desired. Both physical and magical foes will deal significant damage to him. One should make sure to be cautious if Groom Pent must be left in the range of foes as he could take a lot of damage or be ORKO’d if not careful.

Being a cavalier also has drawbacks. Cavalry units are hindered by terrain more than any other movement type, being completely incapable of traveling through forests and being slowed down by trenches. On maps with a lot of these two terrain types, being a cavalier can be a huge hindrance. Groom Pent must also be careful to watch out for anybody with weapons that deal effective damage to cavalry units.

On Yen'fay is it posable to stack his weapon's damage reduction with Spurn's damage reduction or does it only happen once?
The Max 40% text majes me think the answer is no, but if that only refers to the skill…
Gauging demand for a community tournament for FEH Duels
One thing is for sure though, this is much easier to do compared to the Aether League…
Yen'fay Forging Bonds (Fanfic)
Yen’fay: “Pray Pardon, Lady Sharena. Might I have your time?” Sharena: “Oh Yen’fay!…
Hall of Forms - Tharja or Nowi?
So, Awakening HoF is over now, and I want to show you guys my results and hopefully…
Yen'fay day 1 flex
I think this is the first thread for this particular topic This is my build for the…
Read More