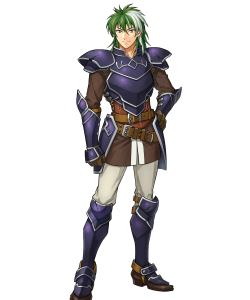 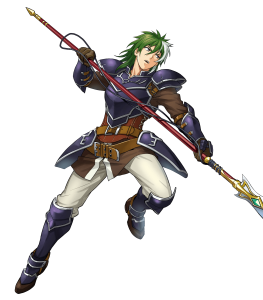 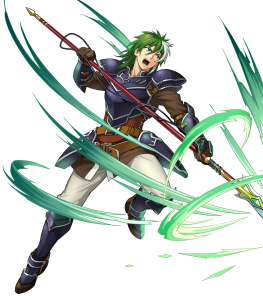 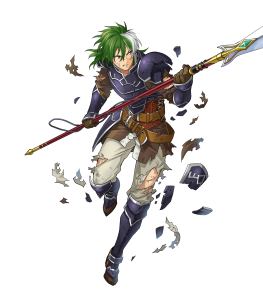 Heath has one of the more balanced stat spreads for a lance flier which allows him a lot of build flexibility. Stat stacking with Heath can enable him to be formidable on the battlefield, as he has no clear weakness.

Of all the blue lance fliers, Heath has the most combined Def+Res, making him a decent choice for a tank.

Being a free unit, Heath is easy to acquire and can benefit newer players who don't have access to a better lance flier right away.

It's very difficult to make him stand out in a crowd, as he does not have many strengths when compared to his peers.

For some reason I couldn't find Ground Orders for the C skill.

I intend to make Heath a supportive tank in this Aether Defense build, buffing up his allies and giving them more mobility while making it hard for enemies to take him down due to his high defenses thanks to Gilt Fork, Distant Counter, and Iote's Shield. Ignis by far gives him the biggest boost of damage, while slow, he's meant for absorbing damage and when brought down enough that'll activate Quick Riposte and punish the enemy faster.

Faster than Light - Heath
Weapon: Slaying Lance+ (+Spd) / (+Def) / (+Atk) / (+Res)
• The Slaying Lance gives Heath some Special Cooldown reduction and helps him to activate his own Special Skills. This is a pretty straight forward weapon, but suits a preferred build with SPD quiet well. Because of his balanced statline, the option for the refine is up to the player, but I would suggest to pick up the SPD refine to boost his Base SPD to 36.

Special: Moonbow / Bonfire
• Moonbow is easily the best choice for his Special Skill, because in combination with the Slaying Lance he can activate it every battle. With Moonbow Heath has an easier matchup against enemies with high defense stats.
• Bonfire can be used to give his attacks a flat damage buff of 16 or with a DEF Refine even 18. Bonfire can be better in certain situations.

Passive A: Atk/Spd Solo / Swift Sparrow / Fury 3 (4)
• To ensure that Heath gets a follow up attack every battle Atk/Spd Solo is the best choice overall. As a flier Heath has more movement range than Infantery or Armored allies, means it is not a challenge to fulfill the requirements of Atk/Spd Solo. Of course you can use Fliers or cavalry in the same team, but then simply try to not place him next to an ally. In addition and the biggest advantage that Atk/Spd Solo has over Swift Sparrow is, that the ATK and SPD buffs will be active in the enemy phase.

• Swift Sparrow 3 gives Heath a bigger increase in ATK and SPD than Atk/Spd Solo and is a powerful alternative, if you decide to make him more of a Player Phase unit. The only disadvantage about this skill is, that Heath will most likely get doubled in the enemy phase, because Swift Sparrows buffs will not be active.

• A good budget option would be Fury in combination with a Brazen Seal. Not only does Heath gets +3 to ATK and SPD, he gets some additional bulk. Heath will take damage every battle, but with a Brazen Seal you can buff Heath by +7 in two stats of your choice. This makes for a good mixed phase build, because Furies buffs will be active all the time and with a Healer you can ensure that Heath does not die from the damage of Fury. Try to keep him in the 70% threshold.

Passive B: Desperation / Vantage / Dull Close
• The easiest choice for a B-Skill for Heath would be Desperation for this build. This Skill ensures that his follow-up attack comes before the attack of the enemy. This skill can change the outcome of a battle drastically and its restriction is easy to fulfill. With a Fury build this skill can be activated pretty easily and should be your skill of choice for this build.

• A other good option would be Vantage. Vantage simply makes Heath attack before the enemy if his HP is below 75%. As you can imagine this can be easily done and can also change the course of battles, but it is more useful for a enemy phase build. This skill can be a lifesaver in the right situations.

• A honourable mention that I want to give is to Dull Close. If Fliers could use Lull Skills, you would find one of them as the best choice overall for a B-Skill. Dull Close is similar but not nearly as strong. Dull Close ensures that the enemy loses all buffs if they uses a sword, axe, lance, dragonstone or beast damage. Fully buff Heath up with Flier buffs and then let him attack the right foe and they should take a good chunk of damage, if they were buffed. The biggest downside of this skill is, that it only works on not ranged foes. Every ranged foe will have no trouble going through Heaths defences and destroy him, so be careful.

Passive C: Speed Smoke / Atk Smoke
• The best option for his C-Skill would be Speed Smoke. Even if Heath gets a good chunk of buffs for his SPD Stat, there will be enemies that can easily double attack him. With Speed Smoke we can ensure that most opponents will have a hard time doubling him, because surrounding enemies will lose -7 to their Speed stat. Heaths good bulk let him survive a hit easily, so he can fight longer on the battlefield.

• Atk Smoke is nearly the same, but it inflicts -7 on the ATK Stat of surrounding enemies. With this skill Heath will take less damage from foes, but this does mean he could get dou-bled instead and take more damage than he should be. In addition the second attack could charge up the special of your enemy and Heath could get defeated by it.

Sacred Seal: Swift Sparrow 2 / Darting Blow 3 / Sturdy Blow 2
• The best choice for our build would be Swift Sparrow as the sacred seal. Heaths 35 ATK are decent, but not insanely high, so he can benefit from a boost in ATK. +4 in ATK and SPD can make a difference in battle and should make him double more enemies.

• Darting Blow 3 is a good choice as well. If you do not need a ATK boost than you should use Darting Blow. +6 to SPD is nothing to laugh at and should get you a lot more follow up attacks then with Swift Sparrow. The choice which one you want to use is yours.

• If you do not care for another boost in his SPD Stat than Sturdy Blow is your way to go. This will give Heath some more bulk, to survive a battle with a enemy more easily.