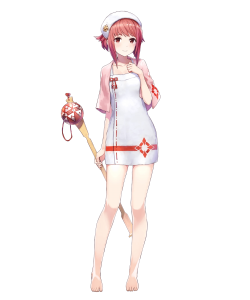 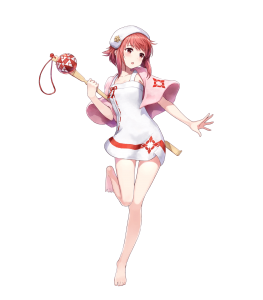 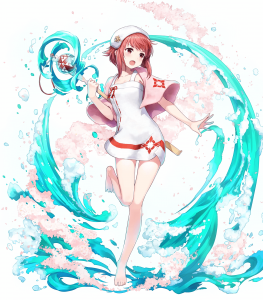 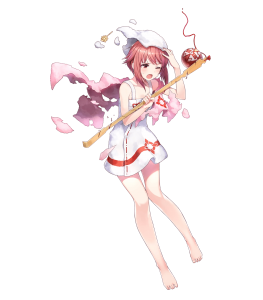 Thanks to her status as a flying healer in addition to her potent offensive stat spread, Hostile Springs Sakura boasts nearly unparalleled versatility as an offensive support unit, possessing the ability to debilitate entire teams with ease as well as provide useful healing and movement support simultaneously. Assets to either of her offensive stats are highly recommended, with a Speed Asset being an especially effective option when supporting her with class-exclusive buffs.

Hostile Springs Sakura has several options for her choice of weapon with this build, most notable of which being the Pain+ staff. This weapon enables her to deal substantial amounts of AoE chip damage and ensures that she will be able to leave a serious dent in even the bulkiest of foes, greatly diminishing their health. Alternatively, the Gravity+ staff can be taken to effectively cripple the opposing team’s mobility instead, granting her allies with a plethora of options both offensively and defensively. Regardless of her chosen weapon, however, it is recommended to take the Dazzling Staff-refine as she already comes packed with Wrathful Staff in her base kit.

Should one wish to maximize the amount of damage she can heal, Recover+ makes for her most consistent and best overall option of healing skill, though her native Physic+ is still a remarkable choice and can be considered as well for its extended range. For her Special, her native Fireflood Balm+ is rather powerful and grants all of her allies a massive +6/+6 Atk/Res buff upon activation, heightening her overall utility further. This can, however, be redundant should one already be utilizing Attack- or Resistance-buffing skills such as Hone Atk. In such instances, Heavenly Light is a good alternative to provide all of her allies with a teamwide heal.

For her A slot, although Bond skills are usually somewhat impractical to effectively utilize in the Player Phase, Hostile Spring Sakura’s access to skills such as Guidance, Flier Guidance, and Flier Formation allows her to easily maintain their adjacency requirement when attacking and makes her an overall fantastic user of Atk/Spd Bond. However, if foregoing the use of such skills altogether and wishing to strictly focus on maximizing her offensive potential, Atk/Spd Solo will then be the preferable option. Atk/Spd Push is another notable option that provides her with a similar offensive boost, but do keep in mind that it does necessitate the use of the Live to Serve seal due to it only being active when she is at 100% HP. If none of the aforementioned are available, Speed +3 and Attack +3 will function perfectly fine on a budget.

Aside from Savage Blow, class-exclusive buffs such as Hone Fliers are excellent choices for her chosen C slot skill when running her alongside other fliers. If utilizing her in mixed team compositions, however, skills such as Guidance (which is fortunately also available as a seal) can be taken instead to allow her teammates to make use of her flexible mobility. Otherwise, feel free to use any C slot skill that best suits her team’s needs, such as her native Spd Opening which provides the fastest ally on her team with a substantial +6 Speed buff.

Petals on the Water (Full Support)

This build takes a far more supportive-inclined approach to Hostile Springs Sakura’s playstyle, aiming to maximize her healing capabilities in addition to her ability to provide her allies with movement support. Accordingly, a +ATK IV may be preferable to a +SPD IV here to increase the amount of damage that she can heal, though both are ultimately excellent options nonetheless.

Hostile Springs Sakura’s choice of weapon for this build is mostly up to personal preference and will generally be fairly interchangeable depending on what her allies need from her. The Gravity+ staff remains a strong choice of weapon to cripple the opposing team’s mobility and allow her teammates to have much more flexibility with positioning. If utilizing Hostile Springs Sakura alongside other offensive sweepers, the Flash+ staff can prove to be an extremely effective choice through the AoE counterattack preventing debuff it applies on her foes, enabling the rest of her team to safely initiate against opposing foes without worry of being killed in retaliation. On a budget, her native Grandscratcher+ can be useful in potentially providing her allies with accelerated Special cooldown on the first turn but lacks the overall consistency that Gravity+ and Flash+ possess.

Recover+ and her native Physic+ will be Hostile Springs Sakura’s best options for her healing skill once more, though the decision between which to use will ultimately boil down to a matter of personal preference. Fireflood Balm+ and Heavenly Light are powerful team-supportive options for her Special that can potentially allow her allies to get out of a tough bind. As for her A slot skill, Atk/Spd 2 is ideal to provide her with a solid offensive boost as well as slightly elevate her healing potential. Otherwise, Attack +3 and Speed +3 both make for respectable budget alternatives.

Thanks to this build’s inclination towards her supportive capabilities, Hostile Springs Sakura can forego the need to run Wrathful Staff altogether in favor of other alternatives like Wings of Mercy. This is a fantastic support skill that allows her to supplement her already impressive range further and teleport directly next to weakened foes who more likely than not will greatly appreciate her healing support. One can also take Flier Formation instead to similarly improve her maneuverability when utilizing her in flier-exclusive team compositions. Alternatively, Live to Serve can be considered as well to grant her greater longevity by enabling her to effectively heal off any damage she may have suffered; this skill, as well as Flier Formation, also have the added benefit of being available as a seal, allowing one to potentially run both of the aforementioned skills simultaneously if so desired.

Movement support skills such as Guidance, Air Orders, and Flier Guidance pair wonderfully with this build’s intended playstyle and serve to make the most of Hostile Springs Sakura’s flexible mobility, but depending on her team composition, buffs such as Hone Fliers or her native Spd Opening may be preferable. Lastly, the Drive Atk seal is a particularly effective option to further enhance her supportive capabilities. If unavailable, the Attack +3 seal is a great placeholder to heighten the potency of her healing Assist further.

Having decided to relax at the hot springs with her older siblings, this iteration of Sakura makes her way into Fire Emblem Heroes as the game’s second flying healer. Right off the bat, this grants her a great deal of utility by allowing her to simultaneously provide valuable healing and movement support thanks to flier-exclusive skills such as Guidance. This is not to mention her access to class-exclusive buffs, unhindered mobility, and the coveted Dazzling + Wrathful Staff combination, all factors that capacitate her to perform as an exceedingly potent offensive support unit -- and fortunately enough, she has the statline to back it up. Boasting a relatively impressive offensive statline of 35/32, Hostile Springs Sakura can make fantastic use of her strengths as a flying healer to function as a powerful (and reliable) source of damage output, especially so when properly supported.

However, she does have her fair share of weaknesses as well. Most notably, Hostile Springs Sakura suffers from having poor skill availability like all other healers. Although the introduction of skills such as Atk/Spd Solo and Atk/Spd Push has allowed this to not be as debilitating of a weakness as it once was, she still lacks the ability to use offensive Specials to bolster her damage output to even higher extents, detracting from her combat prowess substantially. Furthermore, she also possesses an inherent weakness to bows and will typically die outright to an archer’s attacks should one fail to take the proper precautions. Nonetheless, Hostile Springs Sakura should not be underestimated, remaining a glowing example of what it means to be a strong offensive support unit, and will undoubtedly prove to be a useful asset to any team.

As a healer, Hostile Springs Sakura has access to the highly coveted Dazzling + Wrathful Staff combination, granting her the ability to safely initiate against foes without fear of being killed in retaliation and fully maximize her damage output by removing the damage penalty applied to staff units.

Hostile Springs Sakura’s offensive stat spread of 35/32 is quite good for a unit of her class typing and enables her to perform as a surprisingly potent source of damage output, especially so when properly supported and equipped with weapons such as Pain+.

In addition to possessing exceptional mobility and access to class-exclusive buffs, Hostile Springs Sakura’s status as a flier allows her to provide unique movement and healing support simultaneously thanks to skills such as Guidance and Air Orders.

Hostile Springs Sakura’s status as a healer prevents her from gaining access to a plethora of various skills, most notable of which being offensive Specials, greatly limiting her offensive potential.

Her status as a flier renders her extremely susceptible to bows, making it vitally important to keep her out of opposing archers' reach.