Community Posts with Keyword Loki All 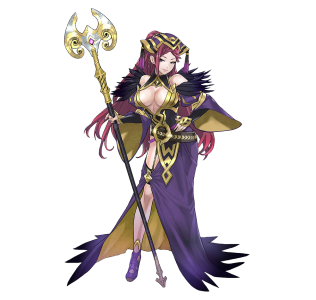 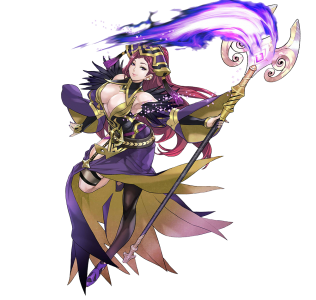 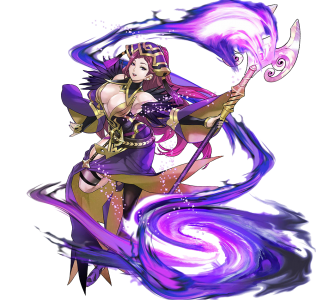 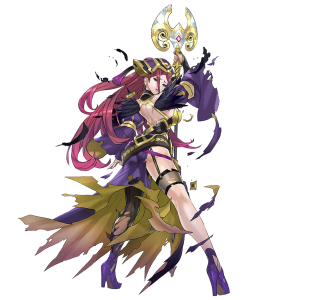 This build aims to capitalize on Loki’s offensive potential while retaining a solid support role. The core of this build revolves around running Dazzling Staff and Wrathful Staff together; not only does it remove the damage penalty tied to staves, it also prevents any opponents from counterattacking when Loki initiates. This essentially turns Loki into a ranged magical Firesweep user, making it easy for her to focus on offensive stats such as Attack and Speed while foregoing her bulk.

As for the weapon itself, Pain+ has the potential to cripple an entire team. Not only will it provide a free 10 after-combat damage to Loki’s target, but also to opponents within two spaces of said target. This pairs exceptionally well with Savage Blow (both C and Sacred Seal slot) by giving her the potential to do a staggering 24 points of after-combat damage to opponents around her target. Not only does this deal massive indirect damage, but it knocks opponents out of high HP thresholds such as Quick Riposte and Guard. Alternatively, Gravity+ makes for another fantastic choice of weapon by crippling the mobility of enemy teams after combat. Combining this with support such as an ally with the skill Reposition or a refresher makes Loki virtually untouchable. Loki’s unique staff,  Thökk, has a similar effect to the aforementioned Gravity+ but applies the debuff at the start of the turn to ranged enemies in her cardinal directions rather than after combat.

Moving on to main skills, Atk/Spd Solo grants Loki a significant boost to her offensive stats when not adjacent to any teammates. Although Brazen Atk/Spd has a higher damage ceiling, it is difficult to properly utilize in practice. This is due to both the fact that Loki should rarely ever take damage thanks to the counterattack-preventing property of Dazzling Staff. If the former isn’t available, Speed +3 and Attack +3 both make for solid budget options to increase Loki’s damage potential.

Savage Blow is a great option in both the C slot and the Sacred Seal slot, as it gives Loki the potential to do massive indirect damage after combat. Odd Attack Wave makes for another good choice, as it grants Loki a significant Attack boost every odd-numbered turn. Otherwise, the C slot can be replaced as needed to suit the team. Finally, both Attack +3 and Speed +3 make for good alternative Sacred Seal options in order to give Loki a solid offensive stat boost.

This build is heavily centered around Loki’s role as a support unit. In addition to Attack and Speed, Resistance also makes for a good choice of boon by allowing Loki to effectively utilize Ploy skills, making her an overall stronger support. Recover+ makes for a fantastic all-purpose healing assist in both consistency and healing output. As for Specials, Earthwater Balm is a great choice of Special thanks to the significant defensive stat boost it provides to its target. Heavenly Light is a great choice for health recovery, as it will heal everyone upon activation. Alternatively, one can run Imbue for a quick to activate healing boost for one unit.

Loki’s personal weapon, Thökk, has great utility by crippling the movement of any ranged enemy in her cardinal directions at the start of her turn. This can make the task of positioning units much easier for your own team. Another good choice of weapon is Panic+, particularly against teams that heavily utilize Hone/Fortify buffs. For the A slot, Atk/Res 2 and Atk/Spd 2 give Loki the best overall bonus to her key stats. If neither are available, both Attack +3 and Resistance +3 make for suitable alternatives.

Moving on, Loki can run Wings of Mercy in her B slot in order to warp when her allies are low on health. This gives her amazing leverage as a team support, as she will be able to move around the map effortlessly in order to heal teammates. Aside from this, Live to Serve is another option that grants Loki great self-sustain when healing. This gives her the opportunity to tank opponents if needed.

Depending on her Resistance, Loki can potentially make effective use of Ploy skills such as Atk and Spd Ploy. This makes her a better overall support by granting her the role of a debuffer, lowering the stats of multiple opponents at once. These can be combined in both the C and Sacred Seal slot for an even more powerful combination of debuffs. Outside of this, Attack +3 is a good Sacred Seal option for increasing the potency of Loki’s healing assist.

Here by popular demand, Loki sets a new standard for infantry staff users. Statwise, Loki leans offensively with strong values in Attack and Speed, making her a devastating user of the coveted Wrathful + Dazzling Staff combination. Not only can Loki severely damage multiple opponents through indirect damage, she can potentially kill her target outright without any chance of retaliation. On top of this, Loki also comes with her own unique weapon in the form of Thökk. In addition to having 14mt and Wrathful Staff build in, Thökk works akin to a Ploy skill by inflicting the Gravity debuff to any ranged opponents in Loki’s cardinal directions at the start of her turn.

With her stats being mainly geared towards offense, Loki naturally lacks on the defensive side. With only 58 physical bulk at base, Loki is likely to be getting taken out in only 1-2 hits by Defense-targeting opponents. The benefits of being a staff unit aren’t without their downfalls either. Healers are very limited in the skills that they can utilize, as their class blocks them from using many powerful skills such as Death Blow and Life and Death as well as any offensive Special such as Blue Flame and Aether.

Regardless, these drawbacks hardly take away from Loki’s combat prowess. The combination of her unique weapon, Wrathful + Dazzling Staff, and an exceptional offensive stat spread allow Loki to excel as both a combatant and a support, making her an extremely flexible unit that can fit well on a variety of teams.

Loki’s personal weapon makes great use of the aforementioned combination. In addition to having Wrathful Staff built in, Thökk has the ability to apply the Gravity debuff to ranged opponents in Loki’s cardinal directions.

Loki’s outstanding 33 Attack and 35 Speed make her highly proficient at dealing significant damage to her opponents as well as effectively utilizing skills such as Recover+.

As a healer, Loki is locked out of a countless amount of powerful passive skills as well as any offensive Special. This limits her overall potential as a combatant.

With only 58 physical bulk at base, Loki doesn’t stand much of a chance in the face of physical damage and will likely fall after only 1 or 2 hits.

Loki’s Stats (as of 2/5/2020, at 7:40 p.m. C.T.) Lvl. 40+5, DF +10, +Atk boon
_______________
Investing in Loki’s HP helps with her already decently high HP. Panic Ploy works with Thökk synergistically well, acting as a tactical hindrance from any distance, given Loki is in cardinal direction of her foe.
While a +Res boon may not be optimal for some, having a super boon does boost her already decent magical survivability by a whopping four points. If you are okay with not having the super boon equipped, a +Spd or +Atk boon will also be very beneficial; a +HP boon helps the synergistic ploys of the Enchantress of the Mist.
Please keep in mind to stay away from a +Def boon unless you are heavily investing in her Def with skills like Fortress Def and any skill boosting Def.
Her Assist, Special, and B-Slot are all very flexible, although you may want to keep Dazzling Staff there to keep her safe from any foe able to counter.

My birthday wish of 2018, she came to me in 10 orbs! Do wishes come true? Yes they do! Gonna look for better IVs in the future. I know she gets a lot of bad rep, but I'm willing to look past that to see her as a more enigmatic manipulator that uses her looks to get her way, that is in-line with her characterisation. She is sooo good in Aether Raids! A core member to have in the raids for me!

Support Build - Enabler
———————————
*This build technically uses Dazzling Flash+, but Gamepress doesn’t have it listed as a weapon option.

Loki is strong & quick for a healer, but her defense isn’t good enough to survive retaliation attacks and Thökk is a bit too situational to consistently rely on. Dazzling Flash+ allows Loki to act as a full-time attack enabler by allowing her to always cancel counter attacks without getting taken out, while Guard 3 & Savage Blow 3 work together to safely whittle down the opponent for other units to take out.

If Loki happens to take enough damage to lose her use of Guard, Brazen Atk/Res 3 will kick in to buff Loki just enough so that she will be able to at least make a dent - if not outright take out - her attacker.

**This build is usable on all healers, though for full effectiveness is recommended on units with a high base Attack stat.