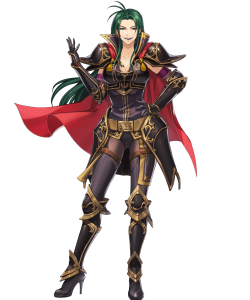 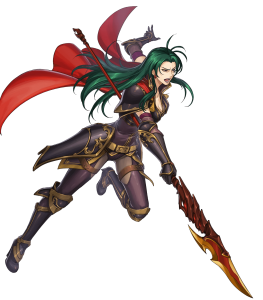 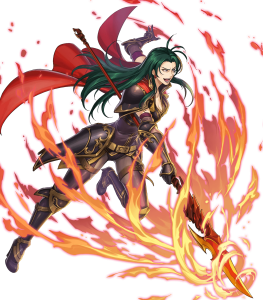 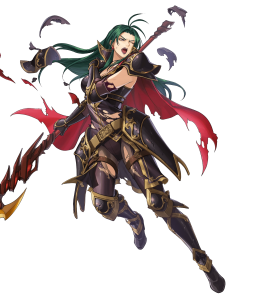 Passive B: Wings of Mercy / Lull Atk/Spd / Hit and Run / Drag Back

Petrine’s exclusive Flame Lance differentiates her from other lance cavaliers through the unique ability to deal magical damage; this generally provides her with much stronger damage output than if she were to remain a physical damage dealer, aside from cases where her foe’s statline is more Resistance oriented. The in-combat debuff Flame Lance applies on her opponent combined with its passive Speed +3 further build upon Petrine’s damage potential, allowing her to hit hard and perform follow-ups with relative consistency. As a cherry-on-top, it deals effective damage against beast units, which is always a nice bonus.

Her stats are no slouch either and complement Flame Lance’s offensive lean quite nicely. With 35 Attack and 37 Speed, Petrine has no problem taking advantage of her PRF’s built-in combat boosts and Resistance-targeting nature to quickly become a strong damage dealer -- and thankfully, her overall bulk doesn’t really suffer despite her high offenses and allow her to take a good amount of damage before going down.

Petrine benefits immensely from the flexible mobility her cavalry status provides, enabling her to assert an offensive presence over a good chunk of the map with an effective four-tile range. Her cavalry status also comes with the bonus of access to class-exclusive buffs for simple but effective team synergy when used alongside other cavalry allies.

While the power of her exclusive weapon is commendable, the majority of its effectiveness is unfortunately locked to whenever Petrine is above 50% HP. This is certainly manageable with the proper support and/or careful play, but it is still something one has to look out for -- in the event that Petrine loses too much HP, her combat prowess drops massively.

Petrine has rather limited skill availability as a result of her cavalry status, being unable to equip skills such as Impacts which would have assisted her combat potential greatly; the introduction of Lull skills do remedy this greatly though. Furthermore, this renders her extremely vulnerable to sources of cavalry-effective damage and unable to traverse certain terrain.