Community Posts with Keyword Shigure All 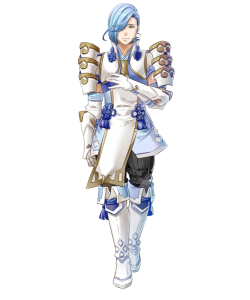 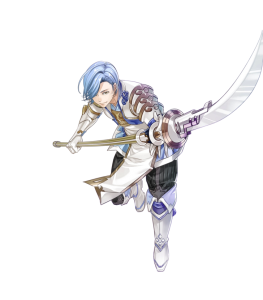 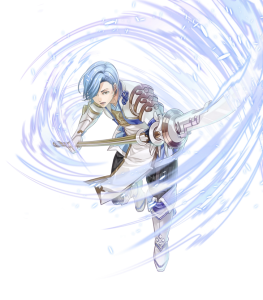 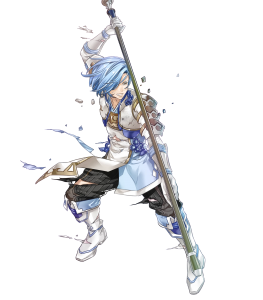 Shigure’s unique weapon is the Azure Lance, a fairly decent addition that gives Shigure a large boost to his Atk and Spd with its effects while also blending some supportive elements within. From the base effect alone, Shigure receives +5 Atk/Spd if he initiates combat or is within two spaces or less from an ally during combat, as well as dealing +7 true damage with his strikes. Once refined, Shigure gains a supportive effect of being able to grant himself and a unit he uses a Rally or Movement Assist Skill on a +6 Atk/Spd displayed buff as well as healing them both by 10 HP. Shigure also gets a further in combat boost of +5 Atk/Spd if his foe is 75% HP or more at the start of combat. All in all, this refined weapon not only improves Shigure’s personal combat performance, but also gives him a soft niche as a Semi-Support by being able to boost the stats of allies while giving them soft healing.

While Shigure’s 33 Atk and 37 Spd are not all that high by the standards expected of units these days, Shigure’s Azure Lance once refined can give him +10 Atk/Spd via in combat boosts alone before counting any Skills or buffs he may be utilizing, on top of dishing out +7 true damage with attacks. This gives Shigure a surprisingly potent offensive potential despite what his stats may suggest.

Base Stats Leave Much to be Desired

While the requirements to receive the bonuses of Azure Lance are easy to receive, the fact of the matter is that Shigure’s statline has not aged well at all. Shigure is more or less dependent on utilizing his personal weapon just to stand a chance at rivaling the statlines of modern units. While Shigure’s offensive stats have always been reasonable, his defensive stats are not very impressive, with his refined weapon doing nothing to address his defensive stats outside of the HP boost from the refined weapon.

Lance Fliers are a Dime a Dozen

Lance Fliers are an extremely crowded unit type, and while Shigure does have some caveats that may make someone consider using him such as his reasonable performance on a budget and good versatility from being able to act as a buffer and offensive unit in one, Shigure may not be the first consideration for someone wanting to invest heavily into a Lance Flier. There is no shortage of good Lance Fliers to invest into, both in terms of expensive five-star locked ones as well as alternative budget options that Shigure may have to compete with such as Cordelia, Clair, or Valter.

This is the build I use, as of rn, shigure has only been merged and dragonflowers used 4 times, so these stats are not even the full potential, but anyways, to the breakdown.

This build was to make shigure an all around attacker, I'm not even going to lie, I'm not the best at the game, but this was the build I made via trial and error that keeps him in the fight. Because Shigure has terrible Def and Res, that's what I decided to focus on, so I gave him the barrier lance which grant a good +7 on Res, then upgraded so it gives off 4Def as a bonus, THEN I decided Sol was the best option since the charge is fast, and it gives good health coverage
Reciprocal aid could be helpful to either an ally OR shigure, as he is high in health, but can be used to help him too
Distant counter is so he has more coverage on the battlefield, because his Res is still low, being able to fight back really makes a difference, plus, if your skill is ready, you can also recover from it.
Def smoke's -7 enemy def is the topping to the cake, as it goes hand in hand with shigure's already high attack.
And for the seal, use mirror stance to get an extra +4 at and Res, although if you really wanted, you could use iotes shield instead, which bypasses effective against flying bonus.
Thanks for reading lol

So the idea behind this Shigure is to Maximize his defenses to bolster the power of Ignis /Bonfire. Ether a Vanguard + Def refine or Courtly Candle +Def will work, the math matters sometimes. I'll be explaining the breakdown with my current Shigure who is 5*+4 Merges and +10 DF s well s S rank Summoner Support

Weapon(s). Vanguard+ Def/Courtly Candle+ Def.
Effects: VG+ If unit is initiated upon, Grants +7 Def during Combat
CC+ At start of combat, if unit's HP ≥ 50%, grants Atk/Def+5 during combat, and also, if foe can make a follow-up attack, reduces damage from foe's first attack by 50%.

So, to start off. Iote's is your BFF since it basically allows Shigure to tank hits from All Physical damage, Including Green Bows. Only unit in my experiences that has been an issue for Shigure that's a Green Bow is Un-merged Shamir mainly due to her Survivalist Bow's effect.. Legd Lyn, Sue, Summer Wolt, Python, etc all struggle to damage Shigure.

Now With Courtly Candle, Shigure if initiating is gonna have 57 and 49 Atk and Def respectfully when above 50% HP. Joint will always be active.
If Bonfire triggers, Shigure is hitting for 24 extra damage, 39 with Ignis. If initiated upon by any physical damaging unit , Distant foil plus courtly gives him +10 to Atk and Def giving Shigure 62 and 54 Atk and Def. Bonfire now is dealing 27 damage and Ignis will deal 43 Respectfully.
With Vanguard+ we lose on the 5 Atk and Def we get for initiating so We are at 52 and 44 for those stats. 22 for Bonfire and 35 for Ignis. Not much difference running Bonfire, but Ignis does tanks a bit. However if initiated upon, Shigure gains +12 Def from the skills, meaning he's still got 52 atk but now has a whopping 61 Def. That's 30 for bonfire and 48 for Ignis.
This is also not taking into account spur/Drive support, or Ally Support. What these numbers show is that If you want a Mixed Phase Shigure, Run Courtly +. However if You just Do not care and wanna stick him in front of Enemies and have him tank Any physical team, Run Vanguard+ as you will have more physical bulk to your name and hit the highest possible damage of 48 on Ignis triggering at a +4 merge +10 DF S ranked Summoner support level.

DISCLAIMER:
DESPERATION 3 was meant to be DIVE-BOMB 3, for some reason it didn&#039;t show up in the list.

A pretty straight-forward hyper offensive skill set that i often use, utilizing the new flier-exclusive Dive-Bomb skill. At least some merges or dragonflowers are recommended, as Shigure is often a bit short on atk for Heavy Blade to trigger otherwise.

The main idea behind this det is to (with the help of Heavy Blade 3) unleash moonbow in just 2 hits, without having to worry about being countered mid-way.
Shigure&#039;s first hit, coupled with Moonbow (+10 atk from harmonic lance) should hopefully crush his opponent before they have a chance to strike back.
As such, The A and C skill can easily be adjusted to fit the situation. I chose to bolster his already potent offensive statline with a total bonus of +11atk/12spd.

Moonbow can also be swapped for other 2 charge specials, such as Ruptured Sky.
(If you want to use 3 charge specials, swap Harmonic Lance for Slaying Lance, and you will achieve the same effect, but with no extra damage)

The choice of weapon is also less important. A +10 bonus when Moonbow triggers is nice, but not neccesary. A slaying lance is not recommended however for 2-charge specials. (as it kinda ruins the point of Heavy Blade).

And of course, though it pains me to say it; this set is NOT just for Shigure, but he can thankfully use it well thanks to his still-relevant Spd stat.

C skill currently being experimented on.

Wagasa having Chill Def 3 built in, allows Shigure to attack and ensure a kill.

Atk Smoke 3 is something I'm experimenting on. However, this does allow him to dive into a group of enemies and he can lower their attacks so long as other enemy units are close enough to the very unit Shigure attacks. This increases Shigure's chances of survival and once again, increases the chance of his teammates surviving attacks as well.

Atk/Def Solo 3 is only recommended if you choose to have Shigure out by himself most of the time. Increasing his atk and def by 6, it overall increases his physical bulk alongside his attack power which is great for both enemy phase and player phase.

Aether will help Shigure not only deal a large amount of damage, he can heal up if a healer isn't really present in your team.