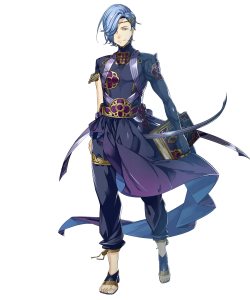 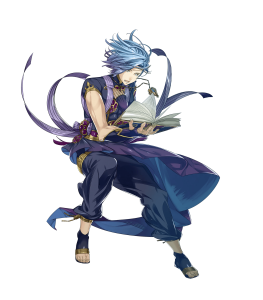 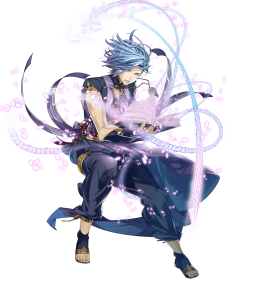 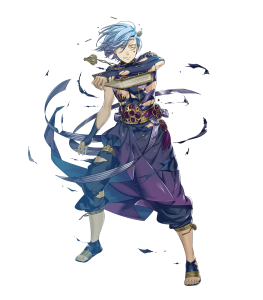 In addition to providing Dance support, this set aims to take advantage of Shigure’s status as a tome unit in order to give him additional combat utility through Weapon Triangle coverage. Since most combat is centered around Enemy Phase, Shigure enjoys a boon in Speed in order to better avoid follow-up attacks from high-tier Speed opponents. A boon in Attack is also acceptable, as it allows him to secure additional ORKOs by increasing his raw damage output. This can potentially be the deciding factor in his matchup against Brave Lyn. As for Specials, Moonbow is both potent and consistent in its activation with Shigure’s overall low stats across the board. At the cost of a longer cooldown, Luna makes for another choice of Special with even more power on activation.

The key to this set is running Blárraven together with Triangle Adept. In addition to the massive Weapon Triangle advantage gained over colorless units, Shigure will also boost his effectiveness against red units even further. However, this comes at the cost of even weaker matchups against green units.

For B skills, Bowbreaker makes for a fantastic choice by further cementing his favorable matchups against colorless archers. This combination allows him to effectively check prominent arena threats including but not limited to Brave Lyn, Bridal Cordelia, Winter Tharja and Halloween Jakob. Another great choice is Swordbreaker; due to sword units having higher Speed on average, Shigure will need it in order to consistently defeat them in a single round of combat by securing his follow-up attack. Finally, Wings of Mercy provides massive leverage as a team support by allowing him to warp adjacent to allies that are low on health.

Drive Spd is both cheap and effective in providing solid buff support. Otherwise, the C slot can be replaced with whatever is needed to accommodate Shigure’s team. There are several good Sacred Seal options; Distant Def is a great choice for this set’s Enemy Phase oriented playstyle, as it will reduce damage taken from all ranged opponents when initiated on. Quick Riposte is another great choice that secures him additional ORKOs by ensuring his follow-up attack in the Enemy Phase. Finally, Speed +3 further improves Shigure’s ability to avoid follow-up attacks.

A Song of Ice and Fire (Offensive/Support)

This build aims to adopt a more offensive combat role with the use of a Blade tome. As such, Attack and Speed are once again the best natures for Shigure to take in order to boost his overall damage output. In addition to Attack and Speed, Resistance also makes for a suitable boon should one wish to utilize Ploy skills.

Glimmer makes for a great choice of Special on any Blade tome user, as it scales with the additional damage received from Hone/Fortify buffs and activates within a reasonable timeframe despite the cooldown penalty tied to Blade tomes. Moonbow is a solid alternative that trades raw power for more consistent damage on activation and makes for a more effective choice against opponents with high Resistance such as Lute and Micaiah

Fury is a fantastic option for this set, as the boost it provides increases his damage output, overall bulk, and ability to effectively utilize Ploy skills. Alternatively, Death Blow is a strong choice in taking out opponents in only a single hit by giving Shigure a strong boost to his Attack on initiation.

The choice of B skill depends on if one wants to focus more on Shigure’s role as a support or as a combatant. Once again, Wings of Mercy is a great choice that gives Shigure a massive boost to his mobility by allowing him to teleport adjacent to allies that are low on health. Similarly, Escape Route allows him to teleport adjacent to any ally when he himself is low on health. This pairs extremely well with this playstyle, as Shigure will often be in HP range after only a single round of combat. Lastly, Swordbreaker makes for a good combat-centric option by securing Shigure’s match-ups against high-tier Speed sword units such as Lucina, Mia, and Soleil.

For his C skill, Shigure can potentially become an effective user of Ploy skills through a Resistance boon and further stat boosting skills such as Fury. In particular, Res Ploy can increase Shigure’s overall damage output while Spd Ploy can secure additional follow-up attacks should they land.

Although his base Attack is rather underwhelming, the damage scaling property of Blade tomes allows Shigure consistently activate the Heavy Blade Seal. This greatly boosts his damage output by allowing him to activate his Specials more frequently. Otherwise, both Speed +3 and Attack +3 make for good picks in order to give Shigure a solid offensive stat boost.

Thanks to his status as both a refresher and a tome user, Shigure can provide fantastic support to his team while maintaining himself in combat. This grants him a lot of utility in battle, as he can take on multiple roles such as a Weapon Triangle check or a Blade tome nuker in addition to his coveted Sing ability.

Being both a refresher and a ranged unit comes with a massive downside. Shigure’s BST is bottom of the barrel at a staggeringly low value of only 139. This leaves him at a relatively low value in every stat. He is heavily outclassed offensively by a plethora of other mages and his overall bulk is lacking at best. Despite his shortcomings in pure combat ability, Shigure more than makes up for it thanks to his Sing ability.

Overall, Shigure is distinctive in the support that he can provide to his team as a tome-welding refresher. His ability to take on multiple support roles at a time means that he can perform well on many different team compositions and will always be a strong asset to them.

Not only does Shigure offer pivotal support by providing his teammates with an additional turn, he can also perform well in combat situations.

Thanks to his class type, Shigure can take on a variety of different roles both offensive and defensive by utilizing weapons such as Blárblade and Blárraven.

In addition to taking away from his standalone combat ability due to having overall fewer stats to allocate, Shigure’s pitiful 139 BST will serve as a detriment to scoring in Arena.

As an extension of his low BST, Shigure’s terrible physical/magical soak of 55/59 makes him vulnerable to damage from all sources. 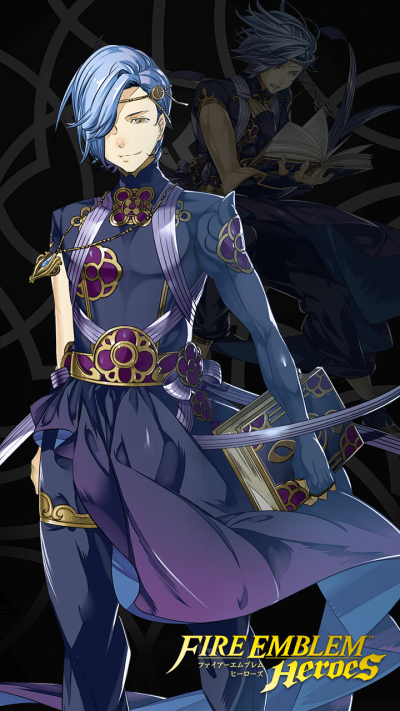