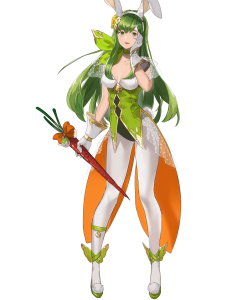 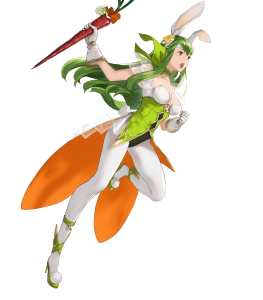 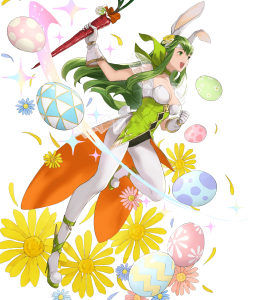 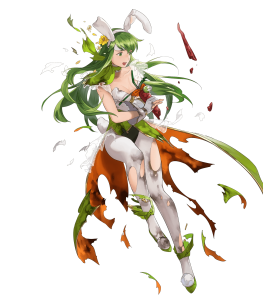 With some of the best offensive stats among dagger wielding fliers, Spring Palla can perform very well with a generalised offensive build. However, her effectiveness will largely be dependant on her weapon: the Barb Shuriken or Lethal Carrot provide some of most versatile utility, though the Pegasus Carrot+ will offer the best match-ups against green armored heroes that frequently run Distant Counter, such as Legendary Hector. Alternatively, Palla can discard all of these weapons in favour of another dagger that deals effective damage to specific heroes if she is needed in a more niche role. All of these are viable choices, but will depend on what the rest of her team can offer.

For skills, her base kit covers most of the essentials. Draconic Aura and Swift Sparrow are complementary, though Moonbow may be a fair consideration as well. Sturdy Impact may also be a valid option, as the loss of Speed can be regained from the Darting Blow seal. While expensive, Sturdy Impact will vastly improve Palla’s survivability against physical attackers and allow her to reach the HP threshold for Desperation more easily. On that note, Desperation will provide solid cover when initiating combat and make up for the loss of defense previously offered by the Pegasus Carrot, making it the clear choice. Chill Def is also a possibility, though Palla will need to be much more wary of counterattacks.

Even Attack Wave is a helpful C slot skill, but ideally Spring Palla will deploy alongside an ally with Hone Fliers, mitigating the need for this skill. This frees up her C slot for helpful mobility skills like Guidance or Air Orders. Darting Blow is a great S slot to ensure that Spring Palla can make consistent follow-up attacks. With that said, the other investment towards Speed in this build places Palla at a great value of 43, so an extra +6 may not be necessary. If this is the case, offensive skills like Quickened Pulse, or utility skills such as Guidance may be preferable.

This build aims to bolster Spring Palla’s solid Attack stat to enable OHKO attacks against as many enemies as possible. Naturally, this means investing as much into her damage output as possible through Attack buffs and Special acceleration.

For Palla’s weapon, the Pegasus Dagger doesn’t really cut it when it comes to offense alone, so a replacement is in order. The best choice is the Ouch Pouch, which will vastly improve Palla’s KO potential on the first turn by accelerating her Special charge. Alternatively, the Barb Shuriken is a somewhat cheaper alternative for those unwilling to spend the resources acquiring the former weapon. Either of these choices is superior to the Pegasus Dagger offensively.

Palla’s chosen Special skill is dependant on both Quickened Pulse and the Ouch Pouch: with these two skills she can charge a 3-turn Special immediately. The best choices include Draconic Aura and Luna, though the better of the two are dependant on the Defense stat of Palla’s opponent. Assuming all of her Attack buffs and Defense debuffs are at play, an enemy would need well over 45 Defense for Luna to be the stronger choice, so Draconic Aura is our recommendation.

As for the remaining skills, Death Blow provides the greatest possible Attack bonus upon engagement, making it the prime choice for A slot skills. Palla’s innate Swift Sparrow is also a reasonable option, and will improve her effectiveness against faster opponents where a second attack may be necessary, but the extra 2-4 points of Attack makes Death Blow the more appealing choice for this particular build. Chill Def is the best B slot for those seeking sheer damage. Desperation is an option, though as Palla is not investing in Speed, there’s little merit to the skill in this build.

Palla’s C and S slot skills follow the same trend: Even Attack Wave provides a great boost to her Attack, though this effect can be granted through an allied teammate instead so this skill is largely dependant on team composition. Quickened Pulse is vital for Palla’s Special charge on the first turn and there are few alternatives that will provide the same offensive benefit.

As the first red dagger flier introduced to the game, Spring Palla offers much more than her first iteration when it comes to stats. A great base Attack of 37 and a solid base Speed of 34 grant her a strong offensive presence, whereas her access to effective damage through an array of different daggers gives her great flexibility. This includes her base dagger, the Pegasus Carrot, which can be a great choice for those looking to cement Palla’s role as a check to green armored heroes like Hector and Fallen Robin (M).

With that said, Palla still faces a few shortcomings. Her poor defense leaves her vulnerable to engagements against physical attackers, or heroes that can target her Defense instead of her Resistance. Though denying follow-up attacks against green heroes can be powerful, many boast a high enough Attack stat to drop Palla in a single blow. In addition, Palla’s Speed, while strong, will likely be insufficient in denying follow-up attacks from the fastest heroes like Karla, Ishtar and Tailtiu.

With a bit of team support and careful engagements, Palla can deal a hefty blow in enemy teams. Through specialising her kit with a variety of daggers, she can become an invaluable check to an array of different classes.

“I'll be happy if this strength can be of use.”

37/34 in Attack and Speed is pretty powerful, and though Palla may struggle to ensure follow-up attacks against some of the faster heroes in the game, she can deal considerable damage. Her decent Speed also protects Palla from possible enemy follow-up attacks.

As a Flier, Spring Palla possesses great mobility as she can traverse forests, trenches, mountains and other difficult terrain completely unimpeded. This allows for much more freedom and can allow for offensive engagements that would be impossible for heroes of other movement types.

For an offensive hero, Spring Palla’s base Resistance of 29 is surprisingly solid, especially alongside her reasonable base HP. These stats allow her to pick fights with mages effectively, though dragons can pose a problem with their ability to target Palla’s weaker defensive stat.

Spring Palla’s base Defense of only 17 leaves her very vulnerable to physical attacks. The Pegasus Dagger can help Palla’s survivability a little, but she should be wary when engaging against physical attackers that can retaliate from range or risk a OHKO.

As a Flier, Spring Palla has a natural weakness to bows. Given her awful defense, any archer will have little problem disposing of her, so she should avoid these heroes at all cost.

Similar to "Eirforce", it is a build primarly centered around AR-O and helps a lot for the galeforce/Wings of mercy centric teams.
The main goal of this build is to lower Palla's HP through Pumpkin-a-Box and Fury (3 or 4)'s self damage to allow her allies to teleport to her with the use of wings of mercy.
You also don't have to worry about any kind of traps interfering with your setup thanks to Palla's very own Disarm trap 3.

Hall of Forms - PoR (predictions)
PoR announcement should be coming next update! I can’t get too excited personally as I…
So yeah, built my near save Arden
I just went for it. I’m a bit short on grails, unfortunately I foddered off all but…
Advanced tactics for patching a long time issue
I have spent my free forma but I know that you can get another one by using the…
Reginn IV's
So, I’ve had a +Atk IV Reginn for a while now, but today being the last day of the…
The future of hit and run
Hit and run is my favourite strat in AR. The Safety Fence gave a huge boost to the…
Read More