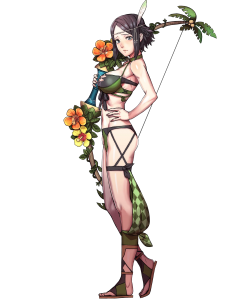 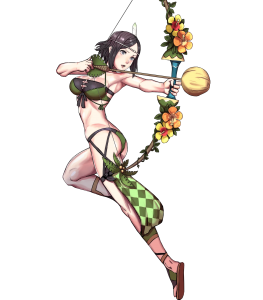 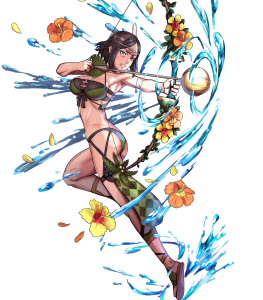 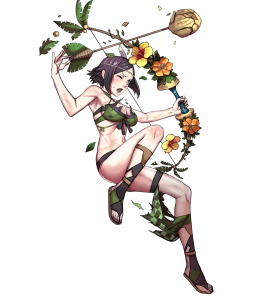 This is a standard Firesweep set for archers. Noire’s base 36 Speed puts her in a great spot to take full advantage of this setup, as Firesweep sets are heavily reliant on being able to double for their damage output. The biggest advantage of Firesweep is that preventing enemy counterattacks keeps the archer almost perfectly safe - this means that any defensive bane works as they ideally never get attacked.

Luna works great as a Special due to Firesweep weapons functioning similarly to Brave weapons; assuming Noire can double, she will activate her Special every other combat. Alternatively, Moonbow is an option if paired with the Quickened Pulse Seal for a quick activation on her first combat.

Life and Death gives a great amount of offensive stats, and the defensive stat penalty is offset by Firesweep Bow’s ability to prevent enemy counterattacks. Swift Sparrow gives slightly less offensive stats but does allow Noire to potentially take a hit on Enemy Phase in a pinch. Finally, Brazen Atk/Spd will give the most offensive stats, but does require Noire to be within its requisite 80% HP threshold; perhaps the most consistent way of achieving this is by running Ardent Sacrifice as her Assist.

Noire’s B skill slot is fairly open due to Firesweep Bow removing the need for Desperation. Chill Spd and Chill Def are both great debuffs that allow Noire to provide a bit of team support while also simultaneously improving her own matchups. Swordbreaker will allow her to guarantee doubles against speedy sword units like Ayra and Karla, though this can be a non-issue with enough team support. Finally, Cancel Affinity will allow Noire to break through mages running a Raven tome/Triangle Adept set, though this set is becoming increasingly less common as time passes.

Due to this build’s heavy reliance on maximizing Speed, Even Spd Wave is a fantastic choice for securing a big +6 buff to Noire’s Speed every other turn. However, it’s not strictly necessary as long as Noire has team support, so it can easily be replaced by her base Infantry Rush or any other C skill to suit the team.

Thanks to Noire’s Speed stat, she can effectively run a Brave Bow and opt into a quad strike setup. This set can potentially deal fantastic damage but does require a good amount of team support to function at its peak.

Luna works best as Noire’s Special, as it will either activate every other combat that she only attacks twice, or is guaranteed to activate whenever she lands a quad strike. Moonbow is a decent alternative if paired with the Quickened Pulse Seal for a guaranteed Special activation on her first combat. It can also result in Noire occasionally activating her Special twice during a quad strike.

Swift Sparrow is the A skill of choice due to the heavy Player Phase-oriented nature of Brave weapons. Life and Death and Brazen Atk/Spd are good options for even more offensive stats if Noire runs Ardent Sacrifice in order to more easily enter Desperation range and avoid the downsides of running those skills.

Stacking Speed is very important for a quad set, so Even Spd Wave is great for securing a +6 buff to Noire’s Speed every other turn. If this can be accounted for via team support, then it can easily be replaced with Infantry Rush or any other C skill to suit the team.

This is a very straightforward set intended for budget purposes to utilize Noire’s base Cocobow. A +Spd refine is chosen for the Cocobow to supplement Noire’s Speed, as doubling is as important as ever for her.

This build runs a very cookie-cutter Fury + Desperation + Moonbow setup. Fury can be replaced with Swift Sparrow to squeeze out a little bit more offensive stats, but does run the risk of placing Noire in a bit more danger from enemy counterattacks without team support or entering Desperation range first.

Noire’s C skill and Seal can easily be swapped out from what is recommended from this set. Her base Infantry Rush works great for providing support to infantry allies, but can easily be replaced with a different skill to suit the team. Both the Speed +3 and Attack +3 Seals will work great for her, but they can also be swapped out if needed.

Noire makes her debut as a seasonal archer with decent Attack and good Speed. One thing that sets Noire apart from most other archers with similar offensive spreads is her strong physical bulk - 63 neutral physical bulk means that she can safely take a hit from most physical damage dealers outside of Special activations. This means that she can be relied on to take on Distant Counter units without having to worry about her getting KO’d in a single counterattack.

Unfortunately for Noire, archers are in a bit of a tough spot in the current meta. Their lack of color advantage and options for heavy damage make it difficult for them to handle tankier units, particularly the armored juggernauts that have taken over. Her magical bulk also makes it a bit difficult for her to safely take on both mages and dragons. Fortunately, most of this can still be worked around thanks to the variety of options available for team support.

With 32/36 offenses, Noire is in a good position to be an offensive threat given a proper build and team support.

63 physical bulk at neutral (higher with a refined Cocobow) means that Noire can safely fight a lot of physical damage threats without having to worry about getting KO’d in a single counterattack (outside of Special activations).

As a seasonal unit, Noire is rather difficult to obtain merges and optimal IVs for in the long-term.

While Noire’s 56 neutral magical bulk is just barely acceptable in many cases, her need for a bane means that her magical bulk will likely be the one taking the hit since her physical bulk is one of her defining features.

Neutral IV Noire with earth blessing to run either with my LIke for +2 atk or Legendary Robin for +3 spd. Fury helps offset the lack of offensive boon and bring her down to Fishie Bow's desperation range, or ardent sacrifice can be used.Chill def softens up tough targets since desperation isn't needed here, and infantry rush is placeholder. The seal is flashing blade (which doesn't seem to be an option on the list), and when below the 75% hp threshold, Noire, blows away foes with glimmer before they can do anything.

(Firesweep build would be easier and safer, but I have never managed to pull Faye, and fishie bow is there because I've been waiting so long to kill off that damn Summer Takumi that I never wanted.)

Enemy Phase
Allow Noire to get low on Hp so Vantage will activate and be sure to have a healer just incase, You want her to use Bonfire as much as possible due to her amazing bulk for an archer.
Close Def 3 seal is almost a must unless you would rather a Speed +3 to have more speed.
Run a buffer of any kind to give her as much bulk and offense as possible to fully maximize her.

Weapon: Cocobow+ (Speed refine). Speed refined to fix her bane, and the +2 to all stats during combat is actually very good.
Assist: Swap. She won't be frontlining and I've run out of Reposition fodder.
Special: Moonbow. Pretty standart, low cooldown special and with all her own buffs she should hit hard.
A Skill: Atk/Speed Bond 3. Along with the buffs from Cocobow, Noire should be able to reach 42 speed and 51 attack during combat if she's near an ally.
B Skill: Swordbreaker 3. Was gonna go with Cancel Affinity at first but with her low res she wouldn't survive mages anyway, so I chose swordbreaker to help her kill those speedy red swords.
C Skill: Infinity Rush 3. There's no reason to change this from her base kit.
Sacred Seal: Drive Def 2. She's in a team along with Brave Lucina and Alm, both of them like the buff to defense.

When running a Firesweep build, not many of your additional skills are important. The main thing is Life and Death. "But wait" I hear you say, "doesn't that sacrifice her decent defense?" And yes, yes it does and it's quite a shame. However, having good def isn't really an issue when the enemy can't counterattack. With this, Noire can function as both an aggressive assassin and a general team support when needed. Nothing too fancy here aside from Chill Def (which is better in this instance due to speed support from allies potentially making Chill Speed overkill) but hey, debuffs are nice.

with 39 from spd (41 with Summoner Support) it reaches a 34 (36) from spd because of the brave bow, it is a decent speed and by using ardent sacrifice active desperation and Brazen Atk / Spd what gives it 46 (48) of atk and 41 (43) of spd together with the support of Skills C that grant more spd or atk, a total of 50 (52) atk and 45 (47) spd (Hone Atk / Spd) or 52 (54) atk and 47 (49) spd (Atk / Spd Tactic or others) which almost guarantees the totality of giving the 4 hits in a row and if it has more damage than your enemy can activate moonbow 2 times thanks to the sacred seal of heavy blade if you have another unit with infantery rush can be changed heavy blade by atk +3 and cause even more damage, something else for skill c can be Even Spd Wave or with the default of noire Infantery rush