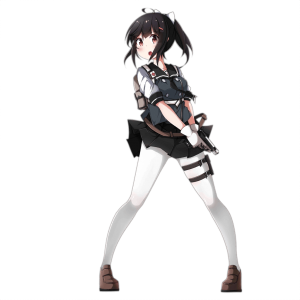 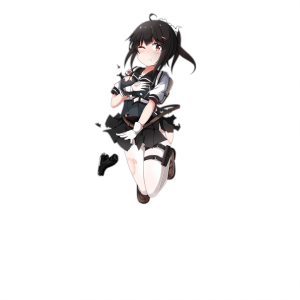 GSh-18 is a unique HG who can only be obtained by spending 3000 batteries to purchase the first five volumes of the official GFL 4-koma in the Cafe Comic Stand. Unlike most HGs, GSh-18 is a self-buffing DPS unit whose Skill, Chain Assault, fixes her Crit Rate to 100% on top of making every attack double.

In addition to her Skill, GSh-18 has good Buff Tile coverage, granting a 24% Damage and 40% Accuracy buff to all T-Dolls in the 5 tiles beside and behind herself. However, many recent HGs come with better tile coverage or stronger tiles, such as: Webley, P22, SAA Mod, Python, Deagle, 5-7, Stechkin, C93.

Unfortunately, with the release of Python in Continuum Turbulence, and Desert Eagle in Shattered Connexion, GSh-18 role as DPS HG was violently usurped from her. Having a base cost of 3000 batteries, which is exceedingly expensive for any Commanders that still need to spend them on HOCs, Infrastructure of Protocol Assimilation chips, GSh-18 is only acquirable when Commanders are in a position to farm Python, already have Python, or already have both Python and Deagle.

GSh-18's Neural Upgrade tries to take some cues from LWMMG's Neural Upgrade, branching out from a DPS role into a hybrid DPS/Support role. Unfortunately for GSh, this somewhat backfired, in part due to her Handgun class, and in part due to the details of her new Skill Twin Star Protection. The stat boosts from her Mod are primarily focused on her survival stats, as opposed to her Damage output, somewhat reinforcing, the attempted hybrid nature of this Neural Upgrade.

Twin Star Protection has two parts. The least relevant is that she gains 20% Critical Hit Damage while her first Skill is active. While not a major benefit this is a flat, and noticeable boost to her DPS, thanks to GSh's auto Crit Skill and strong 34 base Damage. That is where the good news ends for GSh mod, however, as the second part of her second Skill falls somewhat short of the mark.

Every time GSh scores a Critical Hit, all allies on her Tiles gain a 1 HP stacking shield. This is an awkward benefit, as Shield is tied to her critical hit rate, which with a maximum enhanced Suppressor is 40%, before Tile Buffs (56% if combined with Python and Desert Eagle, or with 5-7).  This makes those shields a rather unreliable benefit prior to her Skill activation, which becomes a hard sell when at only 1HP per stack, it is difficult to acquire a meaningful value. After her Skill Activates, GSh-18 still only provides 1 HP shield every attack, which improves her performance to some degree but does not overcome the limited value, when compared to other Shield sources such as HS2000, M500, or P22.

For the vast majority of commanders, GSh-18's Neural upgrade can be safely skipped, as the return on the investment, is overall poor. If you plan to upgrade GSh-18, in general, you can safely stop at Mod 2, although there is some value in her Mod 3 Equipment which provides her Armor Penetration in a small value, but not enough to justify the investment in general.

GSh-18’s Chain Assault is a powerful Skill which fixes her Crit Chance to 100% and grants her a double shot effect. This doubles GSh-18’s base damage every time she attacks.

GSh-18 provides a 24% Damage and 40% Accuracy boost to allies behind and beside herself, which grants GSh-18 the flexibility to take different positions in the Echelon’s Formation.

Below Average Rate of Fire

While GSh-18 is dependent on her regular attacks for DPS, the innate low Rate of Fire of HGs means that she will need significant RoF-buffing support to mob effectively.

Python, a HG released in Continuum Turbulence, is superior to GSh-18 in two ways: Having a base FP of 40 and an ridiculously absurd Accuracy of 81 puts her leagues above GSh, especially against enemies with > 50 evasion. On top of that, Python buffs her self Damage 30% up to 5 times, while also activating her passive to provide buffs for her teammates on her tiles. In other words, Python's skill not only surpasses GSH's in term of damage increase, but she also buffs up the entire team's DPS.

GSH-18's executioner is called Desert Eagle, usually shortened to Deagle. A Shattered Connexion clear reward, Deagle is superior to GSH-18 much like how Python is: Having a base FP of 41, one of the highest in the HG class, and a more respectable Accuracy of 57. On top of that, her Skill increases her RoF by 40%, increases damage taken by enemies marked by her in 10%, and also lets her do 60% more damage to said enemies. Thus her DPS increase is much bigger than GSH-18's.

While expensive, GSh's Mod 3 Special Equipment provides her with a limited AP value, instead of reducing her AP like traditional Hollow Points. This has some niche applications for farming, but does provide GSh some value that other Dolls do not have.

Shields are becoming increasingly vital in Girls' Frontline, either reducing incoming damage during farming runs, or in other situations where minimizing incoming Damage is very important.

Python still exists, and GSh-18 Mod is still inferior to her.

Deagle (Desert Eagle) still exists, and GSh-18 Mod is still inferior to her.

All MGs benefit greatly from GSh-18’s Damage and Accuracy buffs, especially the ones with lower base Accuracy such as M2HB and PK. The sufficient Accuracy buffs GSh-18 provides enable them to equip the Crit-Rate boosting VFL 6-24x56 for a significant DPS boost.

In a 5HG echelon, GSh-18 can be paired with any HGs that enhance her DPS or the team’s survivability. 5HG teams are flexible in composition and are generally made-to-order for a specific map — one may choose to  add enough DPS buffs to easily dispatch the enemy and/or focus on survivability as possible to minimize damage taken. Offensive options like Five-seveN, Mk23, and Grizzly are always useful, while defensive utility HGs like NZ75, M1911 Mod, P7, and Welrod Mk II can be fielded as needed. Px4 Storm’s unique synergy with GSh-18 can be exploited to greatly improve her damage output, although the effectiveness of this buff is lost on the rest of the HGs.

GSh-18 fits naturally into position 5 of a traditional 1 SG Formation with either 3 MG or 2MG 2HG. From here, GSh-18 can be safe behind the team’s SG while still staying in position 5, and when the MGs’ volley ends, GSh-18 can clean up the remaining enemies if needed.

GSh-18 fits in any 5HG team that wants a strong DPS, and should be preferably placed in position 4 (despite her tile coverage encouraging otherwise) to prevent Dummy Link loss.

5HG Echelons will often work out with any roughly synergistic combination of HGs. While Px4 Storm and M1911 Mod are highly recommended in compositions including GSh-18, it is not necessary to run them and the choice of HGs is flexible.

Because she has a low base RoF, adding RoF buffers, such as SAA Mod, 5-7, and Stechkin, modded or not, greatly benefits her capability as a DPS HG.

As GSh-18 relies on Crit shots to proc her shield, Crit Rate bufers are her best friend. That means 5-7 is promoted from best friend to BFF. Besides that, her premod standards still apply to her.

GSh-18 fits naturally into position 5 of a traditional 1 SG Formation with either 3 MG or 2MG 2HG. From here, GSh-18 can be safe behind the team’s SG while still staying in position 5, and when the MGs’ volley ends, GSh-18 can clean up the remaining enemies if needed.

GSh-18 fits in any 5HG team that wants a strong DPS, and should be preferably placed in position 4 (despite her tile coverage encouraging otherwise) to prevent Dummy Link loss.

5HG Echelons will often work out with any roughly synergistic combination of HGs. While Px4 Storm and M1911 Mod are highly recommended in compositions including GSh-18, it is not necessary to run them and the choice of HGs is flexible.

Because she has a low base RoF, adding RoF buffers, such as SAA Mod, 5-7, and Stechkin, modded or not, greatly benefits her capability as a DPS HG.

The GSh-18 is named after its designers, Gryazev and Shipunov, who designed the pistol between 1998 and 2000. One of the most notable features of the weapon is that it has 10 locking lugs instead of the usual 1 or 2 for a handgun. The GSh-18 was designed for the express purpose of using high pressure armor piercing ammunition, while still being able to use normal 9mm ammunition.

The GSh-18 uses steel for all of its working parts, but the frame is made of polymer, which saves weight. Overall it weighs almost half as much as the all steel Beretta M9. Additionally and in true Russian fashion, the GSh-18 is simple but effective -- the entire weapon is only 17 individual parts, unlike a Glock 17 which is made of 34.