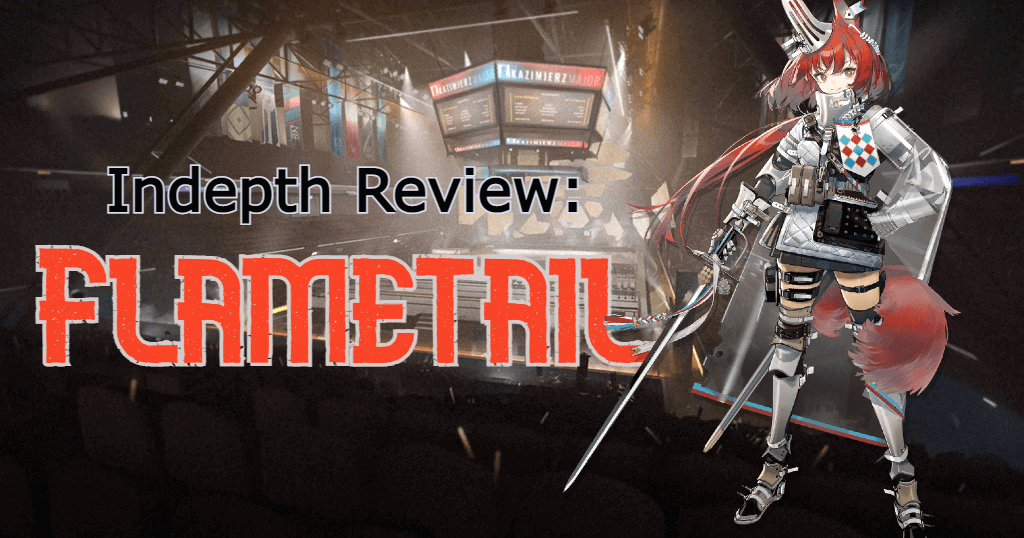 Flametail is the future 6★ Pioneer Vanguard featured in the Path of Radiant banner, which will run alongside the Near Light event. Flametail is the third 6★ Pioneer Vanguard to be released, and the second one to come as the non-limited Operator from a Limited banner, much like Saga. As a result, she’s sometimes seen as the more “undesirable” spook from the banner for people chasing the limited Operator, but does this translate to her battle capabilities as well?

Pioneer Vanguards have been in a tight spot in the metagame for quite some time. While they tend to be great generalist Operators, most content benefits much more from heavily specialized roles that other Vanguard classes can bring, such as the well-known Standard Bearers or the Chargers. As a result, they tend to be pushed out of more optimized or easier clears in favor of other Vanguards unless they can bring something more unique, such as Texas’ Talent and Sword Rain, or Saga’s extra firepower and unique Crippled effect.

What Flametail brings to the table is an effect that’s seldom seen with Vanguards: dodge, dodge and more dodge. Flametail’s entire kit revolves around maximizing her survivability via very high dodge rates and transforming that into a better damage output (more on this later), and even providing nearby allies with evasion chance, which very few other Operators can do.

As a result of this dodge-based kit, however, Flametail is sometimes thought of as very unreliable and completely at the mercy of RNG. We will discuss whether this is true or not and how her chances add up through her effects. For now, let’s look at her stats! 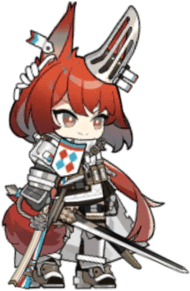 Flametail’s stats are not very remarkable, not because they are bad in any way, but because they are perfectly average within her rarity and archetype. She’s not the best at any single stat (Siege takes that cake for HP and Defense, and Saga for Attack), but she’s also not worse in any significant way.

Perhaps due to the more balanced focus between offense and defense of her kit, Flametail’s stats are unremarkably average.

After evading an attack, Flametail’s next attack hits twice and as many enemies as her block count.

Very simple Talent, but Flametail heavily relies on it for the offensive aspect of her kit. Thanks to this, Flametail is able to convert her survivability-focused Skills into strong offensive options, granting her a more proactive presence on the battlefield.

Be careful though, as consecutive dodges will not grant Flametail multiple doublehit attacks at once.

When Flametail is deployed, all Kazimierz Operators immediately gain 22% (+3% at P5) Physical evasion, including herself.

This Talent gives Flametail some decent survivability (which, as per her first Talent, translates to better damage) while her skills are on downtime. Flametail’s Skills usually have good enough cycling that this is not a big issue, but it’s still a pretty decent effect to have access to. This dodge effect also stacks with other dodge sources, such as the ones provided by her skill, but due to diminishing returns this is often not that great.

Regarding her squad-buffing capabilities, the dodge chance is quite nice, but no Kazimierz Operators really make much out of it apart from herself.

When this 18 SP Skill is activated, Flametail immediately obtains 6 DP and is guaranteed to evade the next Physical attack.

Believe it or not, this is only the second unique first Skill amongst all Pioneer Vanguards, with the first one being Vanilla. In this case, however, “unique” means pretty bad in comparison to the rest of Flametail’s kit.

The overall DP generation of this skill is quite average even if the first trigger is quicker than everyone else’s, but due to the quicker cycling she also suffers the most from SP Lockout amongst other Vanguards’ generic Skills., which isn’t reflected in the following chart.

The average DP gain is also not compensated by the additional effects of the skill: a single guaranteed dodge (only for Physical damage) every 18 seconds is a pretty bad tradeoff even in the most fringe of cases where you just want Flametail to dodge a single boss attack. Even without taking into account how her other Skills do what this one does but much better, Flametail’s first Skill is a pretty big disappointment. 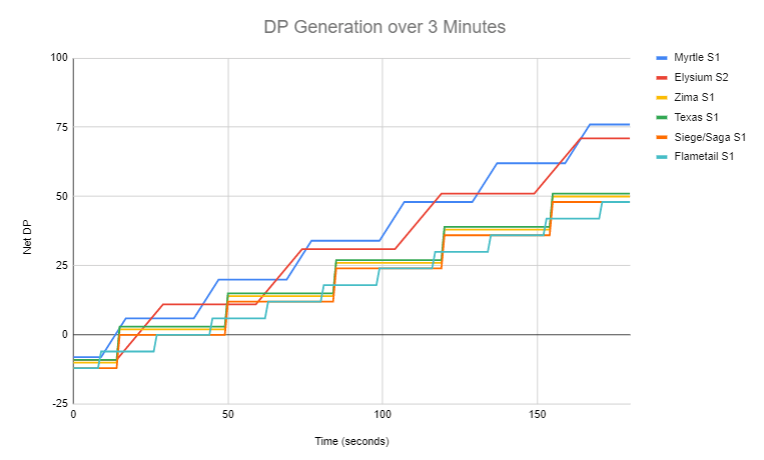 When activated, this Skill generates 13 DP and deals 240% Physical damage twice to up to 6 enemies in a 2-tile-long diamond centered on Flametail, stunning them for a meager 0.5 seconds afterwards. Additionally, all allied Operators within the diamond (including Flametail herself) gain a 50% Physical dodge chance for 10 seconds.

If this skill rings a bell, it’s probably because you’ve used a very similar one before, likely very often: Flametail’s second Skill resembles Texas’ Sword Rain very, very closely. Both skills are centered around providing your team with a burst of DP and some form of support through the additional effects of the skill. They share the exact same range, 40 second SP cost and even their 30 initial SP. Where they differ is in how they provide the party with support.

Where Texas deals a much longer Stun with Arts damage, Flametail instead opts for a more defensively oriented support, granting all allies within the diamond the highest Physical dodge chance out of any Operator in the game. Flametail herself gets a 61% chance (62.5% at P5) to dodge due to how her second Talent stacks with buffs, which translates decently well into offense thanks to her first Talent, but lacks strong offensive presence due to the lack of Attack boosts.

Overall, it poses a decent defensive option that may come in handy in some cases, but it struggles to find its place against the better support that Texas can provide. In regards to DP generation, Flametail also struggles against Texas due to her naturally higher cost as a 6★ Operator and the latter's Talent. It takes Flametail 90 seconds to catch up with Texas’ DP generation if they are both at maximum Potential.

When activated, Flametail generates 1DP per second for the 8 seconds this Skill is active. Flametail’s Attack Interval is also reduced by 30% (to 0.735 seconds), gains an Attack buff of 90%, one more Block and an staggering 80% Physical and Arts evasion chance.

This is Flametail’s bread and butter, and the Skill you really want to use her for in most content. It not only gives her a very strong defensive boost (both the strongest Physical and Arts evasion a single Operator can get), but the quicker Attack Interval, Attack buff and extra Block mix extremely well with her first Talent for a massive increase in damage. Unlike with her first Skill, the average DP generation of this one is well worth it for the huge potential it can bring. However, it does have one really glaring issue.

The amazing cycling of this Skill often hurts Flametail more than it helps her. While it has a really short SP cost of 16 that lets her use this Skill many times in battle, its really short uptime of 8 seconds means she will often be left with no skill at all at the worst possible moment. As a result, Flametail cannot go against the kind of threats her massive 85% dodge rate would be appreciated for, and is forced to rely on her off-skill dodge chance for anything that won’t die in her 8-second-short burst.

So, should I pull for Flametail? Is she a suitable replacement for Saga? Will I get some use out of her if I already have a raised Texas? The answer is MAYBE. Flametail is not a bad operator by any means, but her issues make her not as widely applicable as the aforementioned Vanguards, even if her specific niche can be invaluable at times. Her banner is also shared by Nearl the Radiant Knight, a limited Operator that’s quite strong, so don’t feel too bad if you get spooked by Flametail first. 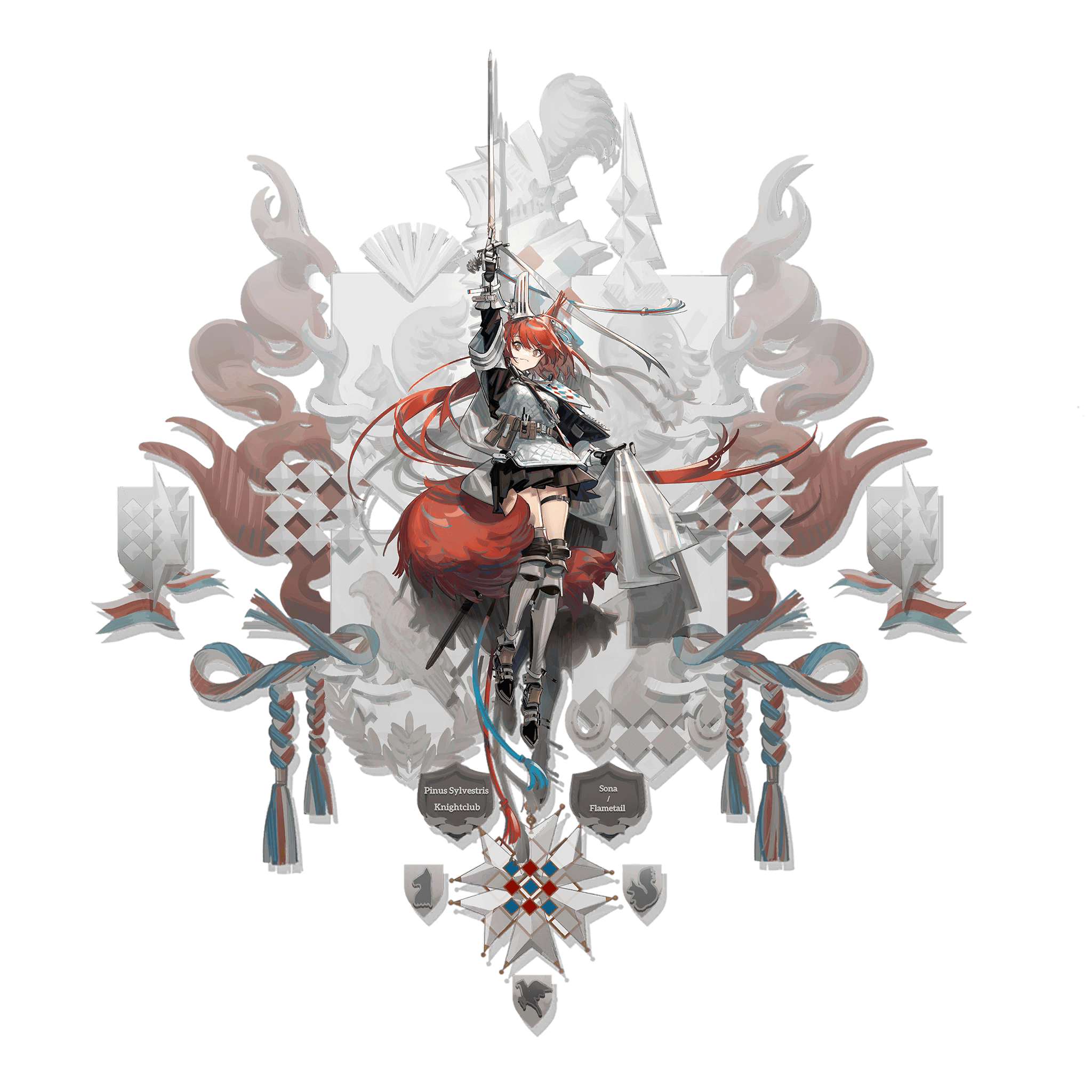