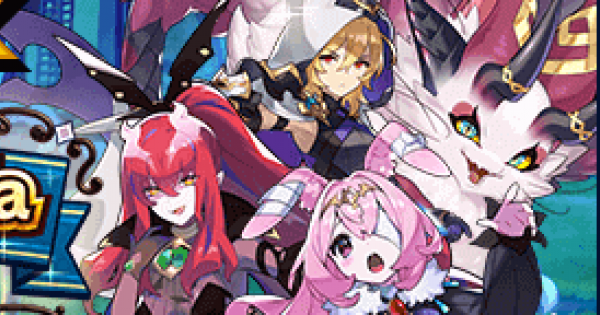 Now don't start with that monster math stuff. It makes my head hurt. The only math I want to do is how much candy per pound I have.

Melsa shambles onto the scene with a support focused kit, but she decays just short of greatness. Let's sink our teeth into this one.

First, Melsa starts off strong with a 25% Strength buff. The SP cost is a tad high, but with Lance SP gains that's not too horrible. What hurts is that Wind now has so many options for buffers who have a skill virtually identical to this one, and they have a kit to back it up, unlike Melsa. Melody only offers 20% Strength on her skill, but she has much lower SP costs, and doesn't really need to use her S2, so she can stack buffs higher. Noelle has a Wind limited buff, but she has a buff time passive that ultimately lets her get more mileage out of her skill. Then there is Tobias, who utterly blows Melsa out of the water with a stronger buff, lower SP costs, and buff time passive and a buff time chain ability. In other words, while Melsa offers a strong buff on her S1, she is buried alive by the competition in Wind and is at the bottom of the Support options. Except for Xaindeer, but we don't talk about him in polite company. Poor man.

There is one benefit to Melsa, which is that her S2 lowers resistance against poison. In longer maps, like Master Ciella, this can really help your team out by allowing them to get more poison stacks onto the boss, and potentially allow a longer window where Poison Punisher prints can be abused. However, it's really hard to justify using Melsa there when Sylas is generally considered so much better of an option, Templar Hope is practically mandatory, and you usually also need to take Lowen or Grace. The last slot is usually given to Ranzel for more bulk and dispells, or a double buff abuser like Louise, and Melsa doesn't have much going for her compared to those picks.

The real problem though is Melsa's passive. Her free revival is very flavorful and can be fun, but the reality is that it's a dead passive most of the time. Having to die, and then getting no buff out of it, for a passive to come into play just isn't worth it. I'd much rather run a buffer who had a more useful passive in that slot, especially a buff time passive like Noelle or Tobias. Her Poison = Team Strength passive is pretty darn useful, but it just doesn't compare to the double buff abuse that Wind currently employs as a longer fight like Master Ciella tends to make Affliction Punisher builds less potent, even with Melsa's nifty resistance debuff.

Verdict: No. Melsa is a support in an element that has more than enough options, and she's just falling apart compared to the other choices.

Seriously, Akasha, it's not funny any more! I still remember the last time I got possessed, and it is not happening this year!

Appropriately enough for a Vampire, Halloween Akasha is Water's first source of bleed. As this has nothing to do with Double Buffs, Karina politely informed her that the bench was that way.

Alright, a little more in depth explanation. The Water and Wind metas have strongly shifted towards Double Buff print abuse, thanks to having both strong buffers and strong mechanics to take advantage of this. This heavily favors Adventurers who both provide defense buffs, and have a way to take advantage of them, like Pipple or more strongly, Karina. While Akasha has some interesting mechanics and her defense down and Bleed are both strong, they just can't compete with Karina's dealing over a million damage in a single hit by stacking buffs until they're a fathom deep.

As for Akasha's kit, it is decent enough, and her increased chance to Debuff the enemy after getting a defense down can help combat pesky boss immunities. But until we shift back towards Affliction Punisher abuse in water (which could indeed happen) that's not nearly as relevant as it would be if Water were abusing multiple debuffs. Maybe if we see more Bleed and Defense Down mechanics she'll be more important, but for now it's merely a curiosity.

Passive's are another sort of wash for Akasha, as a Bleed = Recovery passive is practically useless. Sure, it will keep her alive, but you can easily manage that with some double buff abuse or a dedicated healer if you must.

Verdict: No. Akasha provides only mediocre DPS at the moment, and doesn't fit into well into the current Double Buff spam group.

The only difference between the Grim Reaper and Galex is that the Reaper isn't a part of my OTP.

While Gleo has fallen from the top of the Meta, Gala Alex is holding strong. Her combination of dispel, poison, insane damage, and Shadow's bonkers Agito weapon have kept Alex the Reaper in business. And business is good.

Verdict: Yes. Gala Alex remains one of the strongest Gala Adventurers and is a top prize.

Look, you try re-writing these lyrics to make sense when you're on a sugar high. I think I can smell colors after that last snickers.

Gala Cat Sith continues to be one of the strongest dragons ever release, and is definitely the best Shadow has to offer. There are niche cases, such as with Grace or Patia, where another dragon is a better choice, but generally speaking, Cat Sith is the Cat's Meow.

All Adventurers on Rate Up are limited. Gala Alex and Cat Sith will be back on other Gala Banners, but Melsa and Akasha are here only for a Halloween Bash

On to my recommendations for Wyrmsigils. This is really only relevant if you're going 300 deep in on this, but I think it's worth talking about especially since we are talking about Limited Adventurers.

First off, Cat Sith or Gala Alex are clearly the best pick ups, with Cat Sith being much better as you can use Cat Sith on just about any Shadow Adventurer and turn them into a powerhouse. Either way, both Cat and Alex are hands down top meta picks, far above anyone else on this banner.

Next, Halloween Elisanne with her Spiral is a pretty good choice. She's not at the absolute top of the Light Meta, but she's still pretty strong and has a great kit after her rework. I feel comfortable saying she's probably the best pick out of the Halloween Adventurers (except for Lowen, but he's not an option sadly). After that, Halloween Mym is a great pick up. Not to use, but for her Co-ability. She's an amazing compliment to Ezelith or anyone you want to build for crit. Halloween Akasha isn't all that great right at the moment, but if you have the others, she's not a terrible future investment for her unique kit. Melsa is dead last. Her support kit just doesn't stand out enough in an Element overloaded with support. Well, except for Halloween Maritimus. He's pretty great for Jiang Ziya, but everyone else would prefer Big Chungus thanks to the skill charge the overstuffed furball offers. H Mari isn't awful, but I wouldn't be in a hurry to spend wyrmsigils on him.

Final Verdict: Yes if you are going after Gala Alex or Cat Sith, or if you want to Wyrmsigil an older Halloween Adventurer (though I'd hold off on that until we see if they get a dedicated banner).

Sadly, the new Halloween Adventurers fall sort of flat here, but the good news is that Gala Alex and Cat Sith on the same banner is really awesome if you want to bolster your Shadow Roster. You can also deep dive to get an older Halloween Adventurer through Wyrmsigils, but I'd hold off on that to see if they get a dedicated banner with decent rates. The real crime is no Lowen rate up, as Halloween Lowen is a top of the line choice. Hopefully we see another banner with older options rated up.

Free Dream Summon ( ・∇・)
You might already know this, but we can get a free dream summon ticket during this…
Will Grimnir be available for summoning or will I be screwed of my new fav?! Halp!
I need to know if yet again (Baby loiuse) another favorite will not be available on…
Finally, GaLaxi's home!
Used 7 tenfolds worth of summons (singles first), but thankfully she came home. I was…
This is Important
image702×1243 282 KB It’s the puppy! The baby is returning This better not be some…
Fixed quest Elysium Help
How can I defeat the dragon? My units are not strong enough even though the might of…
Read More