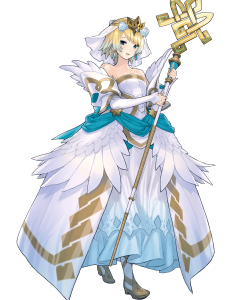 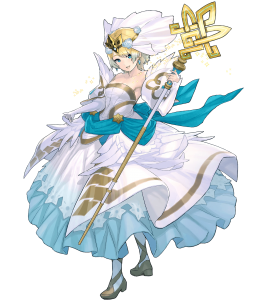 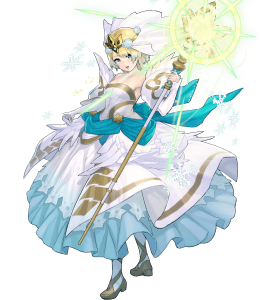 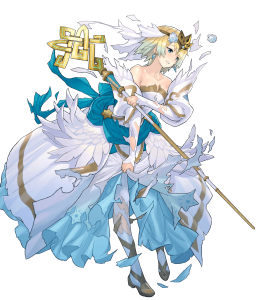 When playing Aether Raids, many players may become frustrated at the sight of enemy teams containing one or more refreshers. Enemy movement becomes unpredictable and you know that a single miscalculation will probably cost you half of your team. You probably wish you could just shut them up so they can’t refresh their teammates. Well, Fjorm’s bridal iteration has the answer you’ve been looking for.

Fjorm’s unique weapon, Gjallarbrú, provides extremely unique and powerful support. By inflicting the Isolation debuff, Fjorm disables the use or being the target of assist skills for any foes in her cardinal directions at the start of turn. This completely disables the movement options teams that rely on units getting refreshed and makes the enemy AI far more predictable.

Gjallarbrú’s activation relies on Fjorm having higher HP than her target foe. Luckily, Fjorm carries an impressive 42 HP at base, one of the highest values among staff units. When combined with HP boosting skills as well as the HP boost received from blessings, Fjorm will be able inflict Isolation on just about any opponent.

In case her support value wasn’t enough, Fjorm also carries a fantastic offensive statline of 34 Attack and 34 Speed. Through the use of the coveted Wrathful + Dazzling Staff combination, Fjorm doesn’t just severely damage her opponents through indirect damage, but can potentially kill them outright in a single round of combat without any chance of retaliation. On top of all this, Fjorm also comes with all the benefits of being a flying unit such as enhanced mobility and access to class-exclusive buffs.

Fjorm’s only notable weakness is her very poor overall bulk should she ever need to take damage in combat. Healers in general are somewhat limited in the skills that they can utilize, as their class blocks them from the use of any offensive Special such as Iceberg or Moonbow. Fjorm’s status as a flier unit also hinders her, as she will be very susceptible to flier effective weapons.

Overall, Fjorm is an exceptional unit thanks to her incredible utility as well as her impressive combat prowess. Any team tackling Aether Raids will be more than lucky to have her.

By inflicting a debuff that prevents opponents from using or being the target of assist skills, many enemy teams, particularly in Aether Raids become much easier to face. Additionally, it also removes the damage penalty tied to most staves.

In addition to removing the damage penalty tied to staves, this combination allows for any healer to completely negate counterattacks when initiating.

In addition to her superior mobility, Fjorm has access to class-exclusive buffs such as Hone Fliers.

Despite being mostly inconsequential when using Dazzling Staff, Fjorm’s lacking physical/magical bulk of 59/63 can spell trouble if she ever needs to take a hit.

As a healer, Fjorm is locked out of many passive skills as well as any offensive Special. This limits her overall potential as a combatant.

Due to her status as a flier, Fjorm may find herself taking far more significant damage from certain weapons such as bows.

This build is for aether raid offense, HP stacking for the weapon proc, rescue+ is very good for movement (with some heal). The balm is pretty open , take what you need. Sudden panic can be usefull with your high HP. The Drive can be awesome for support your teamate, like the balm, take what you need (spd/res ect)

**AUTHOR&amp;amp;#039;S NOTE**
If you would prefer a more offensive healer to secure kills safely, I suggest a +SPD / -DEF/RES Bridal Fjorm and equip Dazzling Staff 3 (included in her base kit). Otherwise, HP is undeniably her best boon to activate Gjallarbrú&amp;amp;#039;s effect and Sudden Panic 3.

Bridal Fjorm flies down the alter in her frost tipped wedding dress. She is, without question, one of THE best healers and support characters in the game thanks to her legendary staff and synergizing base kit. When her HP is greater than or equal to her opponent&amp;amp;#039;s +3 in a cardinal direction, Gjallarbrú inflicts &amp;amp;quot;Isolation&amp;amp;quot; on them; preventing them from using or being the target of assist skills. Yes, that includes singing, dancing, and even healing! There requires a bit of set up to get this skill to proc, but when it does, it becomes a living nightmare for your foes.

On top of preventing enemies to use assist skills, Sudden Panic 3 is able to turn their bonuses to debuffs if they are adjacent to one another and have just 1 less HP than her. You may be asking why you would dump her Dazzling Staff 3 for this skill, that without it she&amp;amp;#039;s susceptible to counter attacks! Well, Bridal Fjorm isn&amp;amp;#039;t a front line unit to kill enemies left and right (you can build her to do so of course), and needs to hold onto her high HP to be at her most dangerous. Besides, her 19 DEF and 22 RES makes her as frail as a snowflake and can easily go down in one hit. So keeping her safely behind tankier, more offensive units allow her to soften enemies up to go in for the kill. Not to mention enemies will have to do some strategic positioning themselves to avoid her staff&amp;amp;#039;s effect and her slot B&amp;amp;#039;s effect.

Ground Orders 3 is exactly what a support unit like Bridal Fjorm needs! Thanks to her mobility of being a flying healer, she is able to traverse maps without the worry of forests, rivers, and mountains getting in her way and slowing her down. With this skill, she can help infantry, cavalry, and even armored units warp to a space adjacent to any ally within 2 spaces. Whether it be launching a surprise attack on your foes or swooping in to rescue an ally in need, Ground Orders 3 allows for other movement type allies to move around the map more quickly and more effectively!

Windfire Balm+ is the way to go to give all of her allies an excellent +6 to their Atk and Spd when healing! Though thanks to it&amp;amp;#039;s difficult availability of only being accessible on Brave Veronica, Heavenly Light is a great substitute to heal all allies +10 universally!

Sacred Seal: HP/Spd 2 gives her some extra HP to catch bulkier opponents with Gjallarbrú and Sudden Panic 3 and a lovely +2 to her speed to help her avoid more doubles and even double slower enemies that cannot counter attack. This also helps if you want to go the more offensive route with a +SPD Bridal Fjorm! It can be substituted with any HP/___ skill that you like, however.

**OPTIONAL** You can also give her Astra Blessing and put her on a team with Naga for some heavy duty chaos in Aether Raids!

(For this build for Bridal Fjorm, she's going to need at least one merge to neutralize whatever bane she has.)

Gjallarbrú has a ploy skill that isolates foes, but it runs on HP, which is why Live to Serve is used. Recover is a good choice of a healing Assist skill with her 34 base Attack. Windfire Balm+ is just for more support on the battlefield. Fort. Def/Res 3 increases Fjorm's defensive bulk (which is why a merge is needed). Dazzling Staff prevents foes from countering, Gjallarbrú has Wrathful Staff on it. Spd Ploy is used for some debuffing capabilities, and while Fjorm needs HP, HP +5 makes for a good seal, but you can use Live to Serve if needed.

Base build, except for Heavenly Light. Comes in hand in the off chance I play Aether Raids.