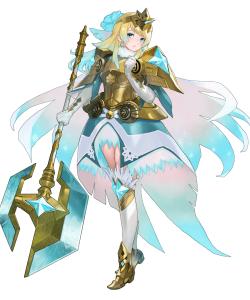 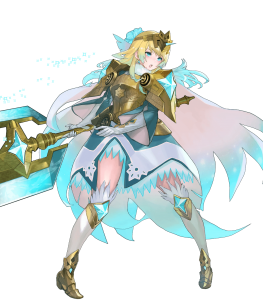 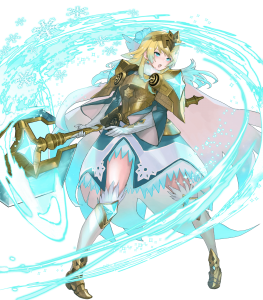 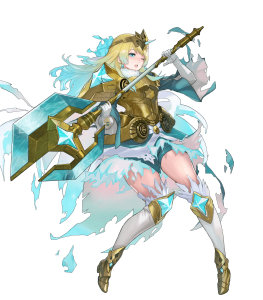 In addition to universally reducing Fjorm's Special cooldown by -1 and enabling counterattack against ranged enemies without needing to run Distant Counter in her A-slot, her Goddess's namesake axe brings along a very interesting first in Fire Emblem Heroes history: it allows her to be the very first armored unit to have access to Null C-Disrupt. That particular effect is very important for reasons we cover later down. At any rate, as long as Fjorm is placed near some other ally, her weapon:

Fjorm retains her first edition of Ice Mirror, which reduces the power of incoming ranged attacks by 30%, and then returns all damage reduced in her own hit. While mildly successful on her Legendary self, its usefulness amplifies remarkably when paired with Fjorm's other default kit skill: Hardy Fighter. We're aware that skill can be a bit difficult to read and digest, so here is an abridged list of perks using both Ice Mirror and Hardy Fighter:

Ascended Fjorm is one of the first new armors of the sixth generation, allowing her to start out at a shockingly blizzardous 190 base stat total. Generally, this translates to a stat distribution that's difficult to mess up (a little on that below) as well as fantastic near-maximal Colisseum scoring potential.

The armor skill access is even more important to note. In addition to Hardy Fighter which has been covered above, Fjorm gets the ever-coveted Save skill line. In particular, her default A/R Far Save synergizes monstrously well with the range-specific attributes of the rest of Fjorm's kit. Since Fjorm is able to bait and draw away ranged combat from her allies, she can pull out all the stops and go ham: the ability to counterattack back, ranged damage reduction-and-return, and confident matchups versus staff and -sweep skill enemies.

Overall, these perks make Ascended Fjorm one of our most unique yet effective distant tank units to currently date.

Fjorm's Attack- and Speed-focused stat distribution results in naturally primed damage and follow-up potential, being quite atypical from your average Save armor. As an Ascended unit, Fjorm even gets to choose one of these as a superasset (+4 instead of +3 to the stat) for free.

Though this comes at the cost of her defensive stats being merely satisfactory, this actually comes to her advantage as Ice Mirror does much of the handiwork when it comes to tanking many powerful ranged hits that come Fjorm's way. Her defenses being at above-average values also tends to grant solid damage values when Ice Mirror returns the damage it reduces.

Everything Fjorm has to offer translates well in a variety of game modes, with both sides of Aether Raids being no exception. On the Offense side, for example, she can make dealing with Nótt or Cavlines significantly more bearable, while she can significantly delay the efforts of ranged initiators — especially Galeforce starter units like Yuri — on Defense.

(also, she hangs out on occasion with her fellow axe homie Gala Elisanne to beat Water content in Dragalia Lost. Talk about talented networking! She also sings... In other languages!)

Fjorm's inability to move more than one space may spell trouble in tight situations, though her playstyle being centered on baiting and engaging ranged enemies with Far Save does ease up on positioning. Additionally, armor-effective weapons pose a moderate threat even with Ice Mirror reduction — Legendary Micaiah's New Dawn particularly hits way too close, and any sort of contact with a generic Armorsmasher holder practically shatters all that nice decorative armor ice. Finally, Fjorm's axe unit startus sometimes proves disadvantageous against particularly tough red enemies.

Fjorm relies on her invested Attack stat and the damage returns from Ice Mirror to take down the opposition, as Nifl's Bite, unfortunately, doesn't offer her the same overbearing stat swings common on other armored tanks like Fallen Edelgard's Twin-Crest Power or Pirate Surtr's Sea-Sear Lance. At times, this may not be enough, especially if Fjorm has to finish things in one blow against something that matches her Speed or follows up on her.

Fjorm's PRF skills being specific to ranged enemies backfires a bit so as long she's not partnered with a dedicated melee or Near Save ally or built to engage in close-range herself as well. Melee units with a high Attack or Speed advantage over Fjorm can bypass her damage reduction and prey on her relatively low Defense stat — this is especially true of many invested Sword heroes. Keep in mind though that Fjorm can be fairly competent on the melee side, so if you need her gone, it's best not to underestimate her especially in Speed.

Additionally, Nifl's Bite allows Fjorm to counterattack enemies with Dazzling Staff, Firesweep, and other similar cancellation techniques, but only if they use bows, daggers, tomes, or staves. Ice Mirror's damage reduction activates only on these same ranged enemies as well. Therefore, melee units with some sort of -sweep effect can be situationally troublesome — Brave Alm's refined Dracofalchion is a pretty dangerous example of this, as well as the growing list of units with Null Follow-Up swords combined with Windsweep.