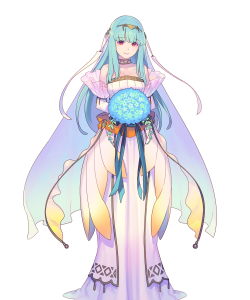 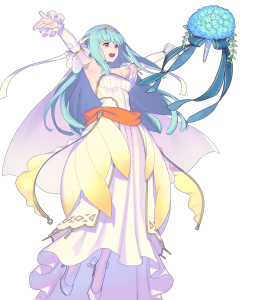 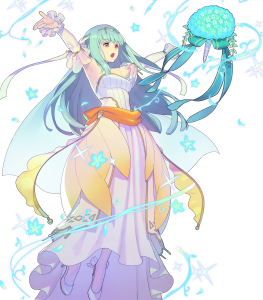 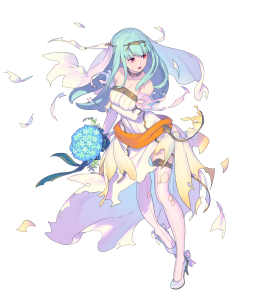 Bridal Ninian sports a staggeringly-low Base Stat Total, with 140 stat points to her name. In a game where most units can brag about 150 or more, this leaves her in a tough situation with regards to her IVs.

Because Ninian’s base stats don’t allow her to be particularly threatening on the battlefield, she finds her usefulness in other ways, namely in supporting her teammates via Dance and various buffs to ensure that they’re well-situated to take out their foes.

This set allows Ninian to give a full round of buffs to an adjacent flier ally at the beginning of your turn with +4/+4/+6/+6, which makes her the perfect solo support for any flying Blade tome you may have. This also benefits Ninian by boosting her own Speed and giving her whatever buffs her ally may have offered in order to hopefully eliminate anyone she may have to fight against during that turn.

Chill Atk is a good B slot for her and she comes with it naturally. A Chill skill is probably her best bet for supportive B slot and it’s up to your team composition to determine which skill works best on her. For an Enemy Phase team, you may want to keep Chill Atk, while for a Player Phase team you would likely want to swap it out for Chill Spd or a debuff to your chosen defensive stat. This allows Ninian to debuff one of her opponents without fail, which further benefits and supports her team.

Fury is her best A-slot with this build, as it slightly lifts her combat capability into something usable by boosting all of her stats at once. The loss of HP shouldn’t be an issue for her, as she doesn’t want to enter combat that often regardless .

For a non-flier team, Ninian still has plenty of supportive options, including a Guidance seal to enhance her ally mobility and her native Drive Spd and Drive Atk that works fantastically with a Spur stacking team.

While this set may seem like the clear choice, it’s difficult to fully recommend making your dancer into a Blade mage, as typically you don’t want to be investing heavily in supporting your dancer in combat. However, because Ninian is the only emblem-type magical dancer in the game, it merits discussing her utility as a Blade mage, a niche in which she will readily outperform her only competition, PA Shigure and Inigo.

Due to her low stats, it’s imperative to keep her buffed at all times if you’d like her to do damage at all. Moonbow is recommended over Glimmer here due to her poor base Attack. If she isn’t fully buffed when she attacks, Glimmer is likely to do less additional damage than Moonbow.

A Ninian with a Speed boon and Swift Sparrow will reach 40 Speed. Assuming she is buffed, she’ll reach 46 Speed, 49 with a Spd +3 seal in her seal slot. This enables her to double attack even the fastest of units. You can sacrifice 1 point of Speed and Attack and opt to choose Fury for this set instead. With Fury, it will only take Ninian 2 engagements to drop her HP below Desperation threshold, which grants her far safer attacks.

As an alternative to Desperation, you can run a Chill debuff in her B slot instead, which helps her damage potential at the risk of her getting killed due to an enemy counterattack.

The rest of the set is pretty cut and dry. Buff her with ally support and send her into battle!

Due to a lack of stats, Ninian shines best when she can minmax key stats to give her an advantage. With Distant Defense 9, Ninian essentially stacks 18 Defense and Resistance to her respective 18 and 27, giving her the defenses of 36/45. While this is counteracted somewhat by her weakness to bows, it still allows Ninian to function a lot easier as a combat unit as long as the enemy attacks her at range. She’ll take far less damage and then be able to dish out punitive Iceberg procs without any buffs whatsoever (though flier buffs would take her to 42/51 Def/Res- certainly nothing to discount there).

Focusing on her Speed is still good, as it helps her avoid doubles from mid-tier Speed units, while B Tomebreaker counteracts blue tomes who would otherwise outspeed her, such as Linde and Ishtar. While Res Ploy won’t take Distant Defense into effect, it can still proc off of her respectable 27 (or 30) Resistance to allow her to hit her opponent harder, while Atk or Spd ploy serves to make her even more tanky.

If desired, you can forego Distant Defense in her Seal Slot to run Iote’s Shield, which could be useful if you’re running her in an all-flier composition. This gives her a Defense of 30, which can be buffed to 36 and is generally enough to tank at least one archer hit.

As the second flying dancer to grace Fire Emblem Heroes, Bridal Ninian comes with a tome instead of a breath weapon in this iteration. When combined with her flier mobility and freedom in positioning, this allows her to be a good fit in any team, as she is perfect for supporting your units, as well as applying some magical damage in her own right.

Unfortunately, her status as a mage dancer makes her stat total suffer and using her will result in a lower total Arena score. Because of her lower stats, she’s also not a great combat unit, even when compared to other dancers, but she makes this up easily by being the first dancer with access to an emblem Blade set.

Her weapon is a tome, which enables her to run a now-expected Blade set and make up for her lower stats with emblem buffs

Despite still not being incredible, Ninian’s Speed and Resistance are her clear strength in stats

Her Speed will allow her to dodge a few doubles coming her way, and if properly invested in, she can double her opponent

This sets her up to be a bit of a blue mage tank- just be careful, as she’s still rather fragile

Due to being a mage dancer, Ninian has among the lowest stat totals in the game

She is uniquely situated to make up for this, however, due to being able to run a Blade tome set. Even so, in terms of raw power, she is one of the poorer emblem Blade tome options available

One must also consider the fact that you’d rather have your dancer support a Blade tome unit instead of having your dancer require support. Ninian cannot be danced herself and needs to be buffed in order to run a successful Blade tome set

This also makes her arena scoring suffer, and teams utilizing Bridal Ninian will generally see a decrease in their score totals.

Ninian being a blue unit is predictable;, however, she competes in an over-saturated blue flier pool and against three other blue dancers

Her most pressing competition is her original dragon self, which can counter ranged opponents and outperforms her in Enemy Phase combat

Bridal Ninian has an awful BST of 140 so she should not ever see combat unless it is to charge miracle, this build aims to capitalize on the wonderful support options that being a blue mage flier gives her. Silver goblet is chosen as the weapon of choice because it's a simple and effective support weapon. The res refine is given to give Ninian some degree of survivability in the case that she is attacked by a magic foe. Wings of mercy for the B slot needs no explaining. Close guard is another effective support skill. With it and silver goblet, all allies within two spaces of Ninian gain +4 to def/res at all times which is very nice no matter who her allies are. Finally aerobatics is there to give Ninian a greater degree of movement to reach allies she couldn't normally get to.

Silver Goblet's innate Distant Guard paired with Ward Fliers and Chill Atk 3 make for a phenomenal flier ball dance unit. Pairs well with a Flier Formation/Ward Fliers Camilla with her prf (the pair will create +12 Def/Res and +3 Atk/Spd against Ranged that can't be panicked). While Silver Goblet may not be as consistent as Hagoita, it does work better against ranged and this set can work if you don't have a NY!Azura. This is a way of bypassing the usual Fresh Bouquet + Fortify Fliers + Hone Atk Seal visible stat buff panic effects. Overall I think Silver Goblet can definitely find a home on Bridal Ninian, and gives her a niche in AR Defense Flier Balls when L!Azura is out of season. Fury 3 can be subbed out for Iote's Shield, and the B skill can be whatever you feel necessary.

This build focuses on making Ninian an all-out supporter while also being able to take out significant Red threats such as Legendary Ike or Zelgius using her great Attack and stellar Speed.

Weapon: Fresh Bouquet+ (+Spd) allows Ninian to boost her adjacent allies’ Speed. Alternatively, if using Ninian in an already buff-heavy team, she could effectively wield the Blárblade+. Blárowl+ is another good choice, since Ninian would already be trying to stay near allies in order to give them buffs.

Assist: Dance is her default skill, which is a “good skill that makes a unit good.” Keep it.

Special: Moonbow or Glimmer are good low-cooldown skills for Ninian, since she wouldn’t be trying to be involved in combat most of the time.

A Skill: Triangle Adept 3 lets Ninian cover almost all of the powerful Red units that are running about in the Arena, such as Zelgius, Mia, Ayra, Karla, Winter Tharja, and so on. Fury 3, as always, remains a very good alternative, along with possibly Life and Death 3, as Ninian’s defensive stats aren’t exactly stellar to begin with.

B Skill: Chill Atk 3, her default skill, is a very good option for Ninian, allowing her to cripple faraway threats continuously. Wings of Mercy 3 is a good alternative, as it is for most dancers/singers.

C Skill: Res Tactic 3 is a great buffing skill for mixed emblem teams. She could use any of the Flier buffing skills when used in a Flier Emblem team. Ultimately, this slot would be up to team composition and player preference.

Sacred Seal: Def Tactic 3 is another good buffing skill, but what goes on the Seal slot also is dependent on team composition and player preference as well.

ninian being a blue mage allows her access to the dancer’s score, which means that she can effectively be built as a healer support as well—dancer’s score+ and both breath of lifes will stack together so that she heals adjacent allies by 21 hp every time she attacks, which will be useful, as ninian’s only real reason she should be attacking is to pick off whatever enemy almost defeated your unit (and thus healing your weakened unit at the same time). +spd or +atk will be helpful for this, so really, you should refine the dancer’s score to whichever one your ninian does not have (my ninian is neutral so i gave her +atk). fury 3 will give her a fighting chance against other units, improving her low bst—this, combined with iceberg as her special, will also allow her to actually do damage because of her high res.

How do you think Ice & Flame will end?
So, I was thinking: Thorr says she lost the bet about Laegjarn winning. However, that…
Which A skill for My Summoner?
4 posts - 2 participants Read full topic
WE DID IT BOYZZZ
After so long… It salvaged my shitty day. 2 posts - 2 participants …
2nd copy of Nott Skill inheritance or merge
I was thinking about inheriting skills to my units to prepare for the AR defense…
Ya'll think there's a real chance at a Lethality, Deadeye type of special for mages?
I mean, I see no reason not to (aside from an obvious blue tome cav), but bow units…
Read More