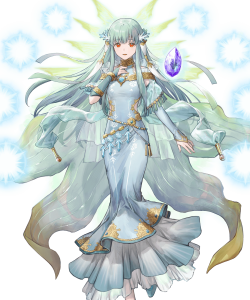 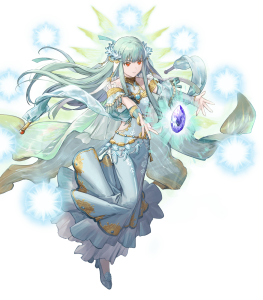 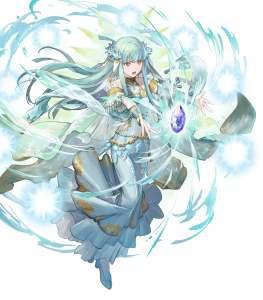 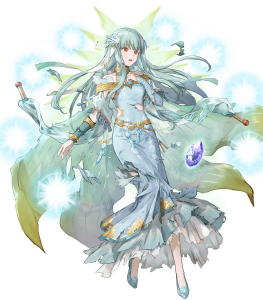 Passive B: S/R Near Trace / Wings of Mercy

For a girl who could quite literally not attack in her original game, Legendary Ninian features a surprising hyper-offensive edge through the beauty that is having access to both the offensive half of Null Follow-Up and a readily-enabled Firesweep effect in one package; this ensures she can break through common enemy mechanics that would otherwise inhibit her damage without worrying about neglecting her defenses, especially since the majority of threats that can break through counterattack negation are often ranged specialists.

The Firesweep portion of Faithful Breath does come with a condition attached, but Ninian can satisfy the Penalty requirement herself through the widespread debuff her weapon applies upon using Dragon’s Dance (which can come at no cost to her, as discussed below)... and, honestly, blue melee specialists are weirdly common and they’re automatically subject to the effect anyway. Furthermore, through the various stat swings allotted by both of her PRFs, Legendary Ninian gets an effective +21/+12 Atk/Spd (assuming optimal conditions) before accounting for further skills, all on top of a baseline stat distribution of 37/41 Atk/Spd and access to a four-point +ATK IV — all of which is just a long-winded way of saying Ninian has the numbers to easily exploit her many strengths.

Apparently, she really wasn’t messing around when she killed those dragons at the end of Blazing Blade.

Legitimate Value and Versatility as a Hybrid Unit

While offensively-tuned dancers are not anything new by any means, the biggest flaw of this archetype has generally lied in the fact that such units cannot fully exploit their hybrid roles simultaneously: if they engage in combat, they cannot Dance, and vice versa. There have been some particular “workarounds” to this, like the advent of Duo or Harmonic skills that refresh without requiring the use of an Assist — however, even these often require additional considerations in competitive play.

Legendary Ninian presents an (almost obvious) alternative that streamlines the main issue by simply refreshing herself at the same time as her target when using Dragon’s Dance. While she unfortunately can’t gain further actions through Galeforce and this comes with a turn-locked caveat, the power and flexibility of this cannot be denied as it distinguishes Ninian as one of the few ‘true’ hybrid units in the game; she doesn’t have to sacrifice potential in either role to maximize both, granting great value.

The usual mobility advantage given by the cavalry class’s three base movement is taken to its limit thanks to Legendary Ninian’s self-refreshing ability (as seen previously with Brave Chrom), allowing her to cover ridiculous ground with little effort — complemented by the fact that she can pair this with Canto and her Firesweep effect to extend herself with minimal penalty in doing so. This alludes to another crucial benefit of Ninian’s movement-type: access to skills like S/R Near Trace to trigger said Canto effect and Atk/Spd Catch for maximum damage are pivotal to altogether meld her kit’s moving parts.

For all her potency, it’s a shame that the Ice-Dragon Oracle’s usage in competitive modes is limited pretty severely given her Legendary status, as using her outside of WaterSeason results in considerable drops in usefulness; she becomes unable to either receive the effects of Mythic Blessings in Aether Raids or improve her allies' scoring potential in Colosseum modes.

Legendary Ninian’s base 22/24 Defense and Resistance are predictably poor given the offensive lean of her entire kit and while Faithful Breath’s counterattack negation is generally sufficient to mitigate this, it’s only active during the Player Phase and makes her a bit inflexible (though this can be generalized to many units beyond just her).