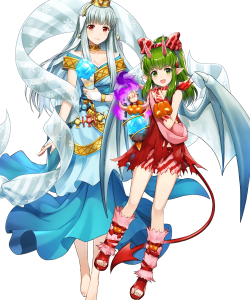 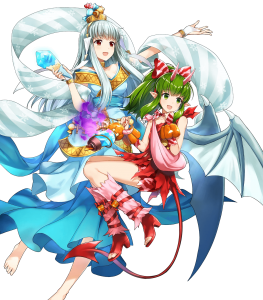 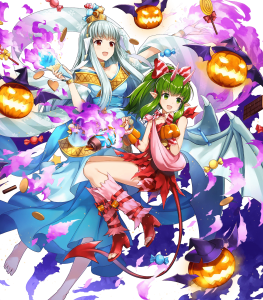 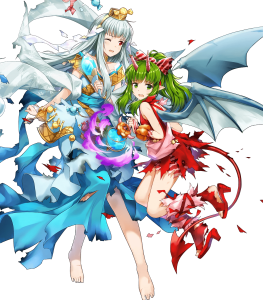 To Protect the World From Devastation! To Unite All Peoples Within Our Nation! (Aether Raids Vantage)

The adorable duo’s exclusive Frostfire Breath provides the two with an incredible amount of raw firepower, coming with both a substantial +6 offensive stat boost when affected by a field buff and a Blade tome-esque effect.

Not only do these combined effects synergize quite well with one another, but together they enable Tiki and Ninian to possess a staggering damage ceiling under the proper conditions -- and thanks to With Everyone!, they can instantly enable Frostfire Breath by themselves for an immediate +21 damage. The sheer potential of this weapon is further cemented through its built-in Attack +3, dragon effectiveness, and adaptive damage property.

Tiki and Ninian boast stellar offensive stats; at 39 base Attack, 42 base Speed, and access to a four-point +ATK IV to boot, the duo possess an incredibly strong foundation for combat prowess and can act as consistent damage dealers even without accounting for Frostfire Breath’s power. Furthermore, their mixed bulk is surprisingly solid despite their statline’s heavy investment into Attack and Speed which can make the two difficult to take down in a single round as well, though their Resistance is on the underwhelming side.

Beyond allowing for improved scoring potential in Resonance Battles, Tiki/Ninian’s Harmonized Hero status provides them access to a unique on-command refreshing effect to the nearest highest HP ally within two spaces via their Harmonic Skill, provided they are from one of their respective titles: Mystery of the Emblem and Blazing Blade.

Being both a dragon and flier comes with various benefits, including flexible mobility, the ability to deal adaptive damage against ranged opponents (which is quite useful for one-shot oriented sets), and access to exclusive skills such as the Rein skill line and Dive-Bomb.

Susceptible to Panic and Lull Effects

While Frostfire Breath is certainly a powerful exclusive weapon, the fact that the majority of its functionality lies in Tiki and Ninian being buffed makes the two exceedingly weak to sources of Panic and buff nullification, such as from Lull skills and Julia’s Light and Dark; this can prove unwieldy to work around in Aether Raids given the ubiquity of such effects.

Tiki/Ninian’s base 25 Resistance isn’t necessarily horrible, but it’s not great either and can leave them in a disadvantageous position when faced with sustained offensive pressure from incoming magical threats. That being said, Tiki/Ninian’s high Speed renders them unlikely to be doubled through normal means, and they should be able to safely avoid outright OHKOs with enough support and/or investment.