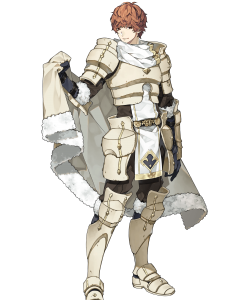 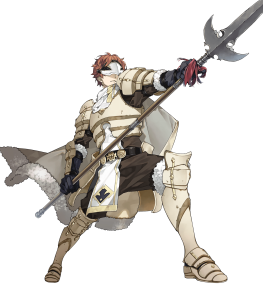 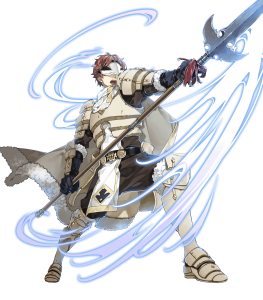 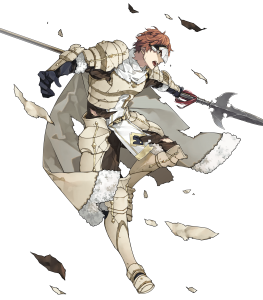 Another Day, Another Mask. (Defensive)

Conrad’s excellent base 34 Defense and 35 Resistance allow him to tank hits from either side of the spectrum extremely well, especially when combined with the Courtly Candle, which further reduces damage from the foe’s first attack by 50% if they perform a follow-up attack(and they almost certainly will given Conrad’s abysmal Speed).

Conrad’s status as a cavalier grants him increased movement, which he can make great use of as a lunge user.

Conrad’s poor Speed leaves him heavily susceptible to follow-up Attacks and ensures that he will never perform them without the aid of Quick Riposte. Follow-up attacks are less of an issue thanks to the Courtly Candle, however.

Overshadowed Outside of Lunging

Outside of his niche as an extremely tanky lunger, Conrad finds himself overshadowed greatly by other lance cavaliers defensively due to his inferior damage output and lack of access to an exclusive weapon. Conrad shines greatly in his niche though, and he can perform well as an enemy phase superunit with enough investment.

This build seeks to utilize a fully merged, +10 dragonflowers Conrad as a min-maxed f2p offensive unit; with Courtly Candle+, Fortress Def/Res, and a Deflect Seal of your choice, Conrad is able to utilize damage reduction to his advantage while maintaining his 3 movement to be able to escape the clutches of his foes in order to become a literal Lunge tank with a whopping 49/52 defenses. Be advised that Conrad is a one-trick pony, since his middling speed of 28 puts himself in a limbo between follow-up guarantees and denials, which will determine whether or not he receives damage reduction. Any smoke besides Pulse Smoke should suffice, as a visible stat penalty will benefit allies with prf effects dealing with [Penalty]. Iceberg or Blue Flame are the most optimal specials, as they will inflict some kind of damage against hard tanks like B!Edelgard since Conrad's attack of 49 has gotta take it easy now. Overall, do this if you love conrad, hes a bean after all.

Vanguard+ (+Res) rounds out Conrad's def/res to 34/39, and 41/39 when being initiated on. Good balancing of these two stats will help later on.

Reposition can be swapped for any beneficial movement skill, however Conrad will enjoy moving allies away from danger and taking that allies spot for himself.

Glacies utilizes the higher of Conrad's two defensive stats. Conrad should not die if ran properly, so long cooldown will not matter.

Close Def 3 in the A-slot and Seal will give Conrad +12 def/res, giving him a monstrous boost to a hefty base.

From here onwards is a circumstantial review, not an explanation of the build. This part can be summarized by reading the last paragraph.

Conrad is best used in a Cavalry Emblem team, alongside another unit with Fortify Cavalry and, to further optimize this build, alongside a Kaden. With the +6 to Def/Res from the Fortify Cavalry being doubled by Kaden's weapon to +12 Def/Res, Conrad's Def/Res when being initiated upon will skyrocket to an astounding 65/63.

Furthermore, having another spot open in your Cavalry team allows you to run either Hone Cavalry or Ward Cavalry, the former allowing a +6 to Atk/Spd that can be doubled, the the latter boosting Conrad's Def/Res another 4 points.

Kaden's C-slot can also be used for either Goad or Ward Cavalry, allowing another +4 to either Atk/Spd or Def/Res.

In all, Conrad can reach statlines in the realm of (Atk/Spd/Def/Res) 61/38/65/63 or 45/22/73/71. The former uses a Hone and Fortify Cavalry, as well as a Goad Cavalry on Kaden. The latter uses only Fortify Cavalry, with Ward Cavalry on the 2 other units. Anyone waiting to use Conrad should no longer be hesitant.

Legendary/Mythic Abyssal clearing, who did you use
So I think this will be the last time I make a thread about the speed clearing and…
What if Loki was a Mythic released in 2021? (AKA Idea for a Mythic Loki)
Ok so, we’re all sad for Loki being a basic Hero with literally nothing special.That’s…
Ascendant floret on Brave Hector. What stat?
I already have brave Hector merged once with a plus attack boon. So now I have to…
Mordecai Build Q's (Hi)
So I +10’d Mordecai a while back at a point where I lost a lot of interest in feh, and…
Julius is too good now
To think I had him at +9 for well over a year, only to really start using him a ton…
Read More