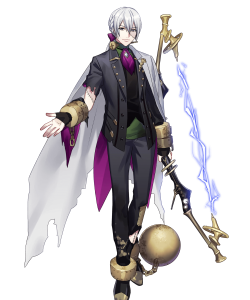 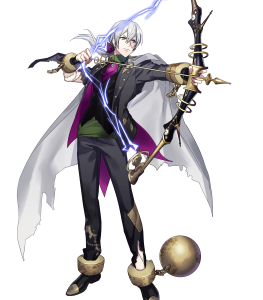 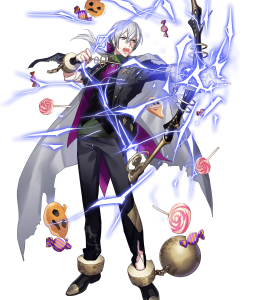 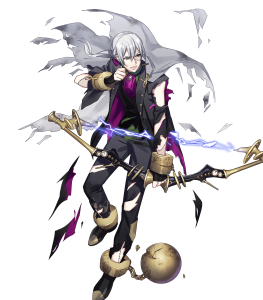 This is the set that turns Halloween Jakob into a complete monster, no pun intended. Thanks to the power of Bold Fighter, Jakob has guaranteed access to quad strikes whenever he attacks. Combine this with his high Attack and the increased Special charge, and the result is a build that very few units will be able to survive.

Brave Bow is the weapon of choice for maximum damage, due to the guaranteed quad strike granting massive damage output on top of Special activations. However, Firesweep Bow is an acceptable option to negate any chance of Jakob dying should the enemy manage to survive the first two attacks.

Ignis is standard for this set; it will activate on Jakob’s third attack, and is incredibly hard to survive due to the massive damage output it entails. Bonfire is a strong alternative option, particularly if paired with the Quickened Pulse seal and Brave Bow for an instant Bonfire activation on the second hit. Bonfire has the additional benefit of allowing Jakob to break through enemies with Guard. Aether is generally an inferior option to Ignis and Bonfire, but the added healing can help Jakob sustain if he’s fighting a series of particularly tanky enemies. Moonbow will allow Jakob to activate his Special every other attack; while this is devastatingly strong, it does lack the superior burst capabilities of Ignis or Bonfire.

Death Blow is better than Sturdy Blow for raw damage output, but Sturdy Blow helps increase Jakob’s tankiness as he attacks. The damage loss isn’t particularly extreme, as Ignis or Bonfire’s damage will also increase from the extra Defense.

As a ranged armor unit, Jakob isn’t nearly as reliant on Armor March in order to engage enemies. The debuff from Def Ploy results in a significant damage increase, as it is effectively +5 additional damage per hit - up to +20 damage on a quad strike. Jakob’s good Resistance stat makes him a strong user of Def Ploy; however, his C skill can be replaced as needed to fit the team composition.

For a more balanced approach, this build offers Jakob the ability to be devastatingly powerful on both phases. The combination of Bold Fighter and Quick Riposte, exclusive to armored units, allows them to guarantee doubles on both phases regardless of Speed.

Glimmer or Moonbow are good alternative options to Ignis if favoring consistent damage output over big bursts of damage. Although they will unfortunately result in the increased Special charges from Bold Fighter being wasted, running Glimmer or Moonbow will allow Jakob to retaliate with a Special activation twice when initiated on.

Close Counter is very useful to maximize Jakob’s ability to deal with any and all enemies; his strong mixed bulk allows him to easily take on melee threats as well as ranged. Alternatively, both Atk/Def Bond and Atk/Res Bond can be useful by improving his stats on both phases. The choice between the two Bond skills is up to also up to preference, with the same reasoning as the choice of refine on the Slaying Bow.

As an armored unit with good mixed defenses, Jakob can run a variety of different builds to function as a tank. This set can range anywhere from budget to extremely high investment, with varying degrees of effectiveness.

Guard Bow’s Distant Def effect results in Jakob’s defenses getting exceptionally high against ranged threats. However, his base Monstrous Bow is functional for a tank setup. In either case, the choice of refine is mostly up to preference between +Def or +Res; the main difference is that +Def increases physical bulk and increases Bonfire damage, while +Res increases magical bulk, Iceberg damage, and Jakob’s ability to land Ploys. The choice between Ignis and Glacies (or Bonfire and Iceberg) is just a matter of picking the one that corresponds to which of Jakob’s Defense or Resistance is higher once accounting for all stat bonuses. If running Vengeful Fighter, then the 4 charge Specials (Ignis and Glacies) should be taken, otherwise the 3 charge specials (Bonfire and Iceberg) should be taken.

Close Counter may seem counterintuitive with a Guard Bow, but pairing them with the Close Def seal grants Jakob strong coverage against all types of damage. If preferred, Jakob can elect for Distant Def in his A slot and Sacred Seal, for a total of +18 Defense and Resistance against ranged attacks, making him incredibly resilient against them. Taking Svalinn Shield will prevent Jakob from countering against melee units, but will prevent them from being able to obliterate him with effective damage; this will allow him to tank them for extended periods of time, which can be very useful for protecting other armored teammates. It also has the added benefit of keeping him safe from Micaiah, whose ranged anti-armor tome is otherwise very dangerous.

Vengeful Fighter is a direct upgrade from  Quick Riposte, giving Jakob a larger HP threshold to maintain his ability to double, while also allowing him to run higher damage Specials thanks to the increased Special charge. On a budget, Wary Fighter will make Jakob even tankier by removing enemies’ ability to double him, at the cost of also significantly reducing Jakob’s damage output by also preventing him from doubling. Guard is an alternative option that can be paired with the Quick Riposte seal to deny enemy Specials - this can be a highly potent option when considering enemy armor units that may be running Bold Fighter.

Atk Ploy helps add to Jakob’s defensive capabilities, as debuffing enemies’ Attack will result in lower damage coming his way. Alternatively, Def Ploy will increase the damage output of Jakob and any other physical teammates. Both are good support options that make use of Jakob’s strong Resistance stat, but they can be replaced as needed to suit the team.

For seals, Close Def synergizes well with Close Counter to give Jakob very high defenses against all types of attacks, while Distant Def doubles down on his tankiness against ranged threats. The Quick Riposte seal should really only be considered if running Guard as Jakob’s B skill.

Halloween Jakob may have seemed mildly underwhelming on his release, but all that changed when the Bold Fighter nation attacked. He went from being a solid, tanky archer with decent damage when hitting twice with a Brave Bow, to being a ruthless killing machine, unleashing quad strikes backed up by Ignis bombs.

Jakob’s offensive power is so absurdly high with Bold Fighter that most units have extreme difficulty surviving him. He doesn’t even suffer from paper-thin defenses like most units with incredible offenses do; he is easily capable of taking a hit or three, particularly when backed up by armor team buff support.

Halloween Jakob is so insanely strong that all teams should consider their options when facing his offensive Brave Bow + Bold Fighter build. In player control, he can readily wipe out nearly any enemy and be extremely resilient when being attacked. He is a powerful asset to any team, and can easily make up for any flaws he may have.

Jakob has access to powerful, armor-exclusive skills like Bold Fighter and Ward Armor, while also enjoying higher BST compared to other unit types.

This skill is so game-changingly powerful on Jakob that it deserves its own section. Thanks to this skill, Jakob has nearly unmatched offensive power that very few units are capable of withstanding.

With 33 Defense and 32 Resistance, Jakob is quite resilient. Having 75 physical and 74 magical bulk make him extremely difficult to KO in a single hit, making it extremely tough to stop him from unleashing a powerful quad strike with Bold Fighter and a Brave Bow.

With the exception of Speed, all of Jakob’s stats are good. As a result, he is capable of running a large variety of builds, including a powerful mixed phase setup unique to armored units.

While being a ranged unit is not a massive benefit by itself, Jakob’s ranged attacks allow him to circumvent his poor mobility to a certain extent, and reduces the need for him to have Armor March support or to run the Armored Boots seal.

While being a ranged unit helps alleviate this somewhat, the fact remains that Jakob’s status as an armored unit means he is stuck with the worst mobility in the game. This can be alleviated with Armor March or the Armored Boots seal, but even those are taking up skill/seal slots that could otherwise be used for other skills/seals.

As an armored unit, Jakob has an innate weakness to anti-armor weapons like Armorsmasher and Micaiah’s Thani tome. Circumventing this weakness with Svalinn Shield is a pretty big sacrifice, considering that he could instead run other powerful A skills like Close Counter.

Jakob’s Speed isn’t a complete liability - getting doubled results in more Special charges. However, it does force Jakob to run skills like Bold Fighter or Vengeful Fighter to get around his poor Speed.

This is a build I call Infinite Arrow Jakob, this H! Jakob has been built to player phase quad any unit and as long as he gets in Brash Assualt Range he will quad with no stop. Brazen Atk/Def 3 will activate and deal massive damage to boot and Bold Fighter will allow Jakob to get special every time in one turn.

If you happened to have a spare Brave Celica that you might as well not use, you can use that Celica to upgrade Jakob's Death Blow 3 to 4. If you haven't given Jakob Death Blow, I suggest getting Death Blow of any level first from another unit and inheriting DB4 next.

He deals tons of damage with this build. With his IV (+Atk, -Spd), he gains even more Attack, and since he is using Brave Bow+, he does not need Speed.
Sturdy Blow 2 boosts Jakob's hits (+4 Atk 4x), as well as Ignis (+4 Def). He could use Death Blow 3, too, but sacrificing 2 Attack for 4 Defense is definitely worth it, in case he does not OH tanks with DC.
Bold Fighter 3 is ideal for Jakob with Brave Bow+.
Jakob can easily activate Def Ploy because of his high Res.
Atk/Def 2 has the same effect as Sturdy Blow, boosting his attacks and Ignis

I made this build since I got a +res
-spd and I did not want to do the brave bow Jakob build that everyone is doing so instead I sacrificed one of my bride Cordelias and gave him Cupid arrow+. With this weapon he is able to gain monstrous defenses while also providing his teammates, which should most of the time be triple ward armor team making him reach 53 defense and 55 res after a turn of combat making him impenetrable. The seal can be quickened pulse, res+3, def+3 depending if you want more defenses or a special ready after one combat 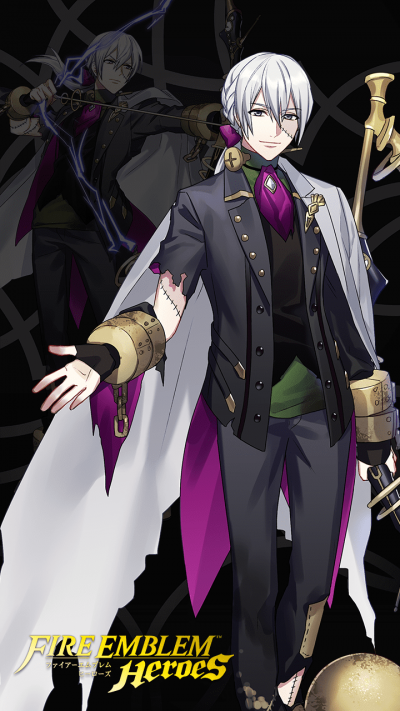