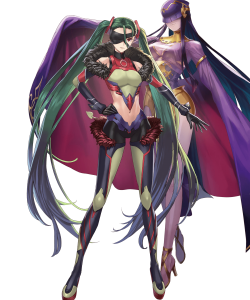 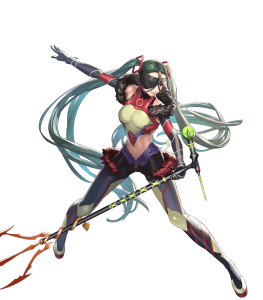 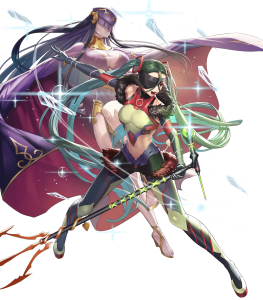 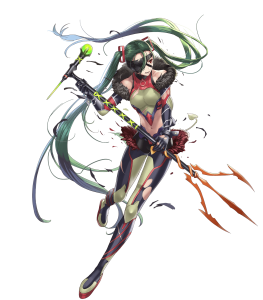 +ATK: Kiria sports an Attack Super Asset, bumping her Attack value to an astonishingly high value of 45, and an even more staggering value of 62 when Mirage Rod is equipped. This Asset will see use across any build that Kiria may be choosing to utilize, but is extremely recommended for builds that rely on Player Phase damage or Vantage damage.

+DEF/+RES: Taking an Asset in either Kiria’s Defense or Resistance will enable her to become even more durable than before. Kiria’s Resistance is already very high, and boosting it further will allow her to easily shrug off magical blows. On the other hand, a Defense Asset will balance out Kiria’s defensive stats, allowing her to be even more solid of a mixed tank.

HP: Kiria has a Super Flaw in her HP, making it less than ideal for a Flaw recommendation. For a Player Phase oriented Kiria, this Flaw should not be much of an issue, but for an Enemy Phase oriented Kiria build it could prove to be a dangerous gamble as it reduces both her Physical and Magical bulk.

-SPD: While Kiria’s popularity ratings in her idol career may be soaring quickly up the charts, her Speed on the other hand stays completely at rock bottom. Kiria’s Speed stat is beyond saving at a base value of 20, making it the perfect Flaw stat for her to take.

Mirage Rod isn’t a very complicated unique weapon, but it is a very reliable one. In addition to granting Kiria Attack +3, any foes within two spaces or less from Kiria during combat will receive a penalty of -6 to their Attack and Resistance. These debuffs can allow Kiria to dish out more damage, take less damage, and if she is running Heavy Blade she will have an even easier time activating it. Mirage Rod can also be used for support, as Kiria does not necessarily have to be the one in combat. So long as she is two spaces or less away from the foe, even an ally can make use of Kiria’s debuffs.

Even before taking Mirage Rod into account, Kiria’s base Attack of 41 is extremely high, and boosted even further by an Attack Super Asset that will make her sit at 45 Attack before any kind of weapons or Skills are taken into account. Kiria is able to effectively reach the damage ceiling that most Blade tome units often achieve when buffed all on her own.

Kiria’s base Resistance is a strong 34, and her base Defense is a workable 29. Kiria can take a Defense Asset to better mix her defensive stats, and while these values may not seem extremely high, the fact that Mirage Rod inflicts a -6 Attack debuff to opponents means that Kiria actually has an effective value of 6 more to her defenses, making her more durable than she may initially seem. Her base kit in specific is quite tailored to ensuring that she is an extremely effective defensive wall against magical units, but it can be built upon even further to handle both magical and physical threats.

Kiria’s status as Infantry allows her to have a plethora of Skill options at her disposal, ranging from Skills such as Special Spiral and Null C-Disrupt to name a few. She also does not have to fear effective damage outside of the extremely niche Poison Dagger.

Kiria’s base Speed of 20 makes her one of the slowest Heroes in the game, and thus she is forced to either rely on OHKOs, or run a Skill such as Quick Riposte in order to secure follow-up attacks. Her low Speed also makes her a tad less safe than a red mage with a similar debuffing tome, Tharja with her Tharja’s Hex. Tharja may not be as extremely durable as Kiria is, but she has less of a chance to be follow-up attacked, allowing for her to be relatively safe in that regard from extremely fast wall breaker type units such as Legendary Alm.

Could have Benefitted from Armor Skills

While Kiria’s status as an Infantry unit is definitely full of benefits, her horrid Speed stat means that she could have enjoyed Skills such as Bold Fighter or Vengeful Fighter that Armors are able to use. This could have given Kiria the ability to easily land follow-up attacks without any worry outside of Null Follow-Up and other follow-up blocking Skills and weapons.

With an asset in defense Kiria has good potential for mixed defenses. The reason beingbevause of the synergy between mirage rod &amp;amp; lull atk/res to create a combined -9 to attack &amp;amp; resistance during combat while neutralizing bonuses. A -9 deficit to attack is enough to make any unit do significantly less damage. Combined with attack smoke they have a total -16 deficit to attack. If Kiria mixed defenses are properly buffed then she can serve a potent mixed defense unit like any other, with only decent at best stats in both defense resistance, if given quick repost in the S slot to dramatically augment her killing potential due its synergy with her naturally high attack, and the enemy’s -9 deficit to resistance &amp;amp; neautralized bonus’s.

She's basically Winter Tharja, but with better speed and MUCH better attack and movement. Because of her low speed a special with a short CD is helpful in order not to lose her Lull Atk/Res B slot skill. Along with a further res debuff with Threaten in C, and a boost to res on her seal, Kiria is a formidable mage with enough bulk to take at least one hit from most units, with her only threat being Blue mages using brave tomes (Looking at you, Reinhardt!) or other Blue units who can double her.