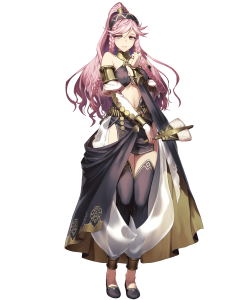 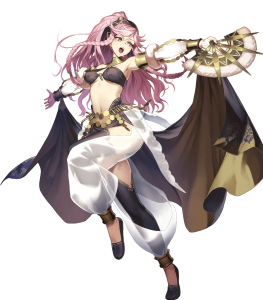 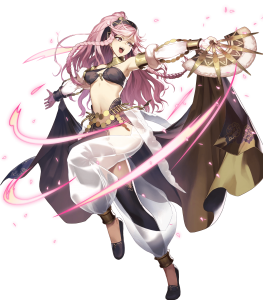 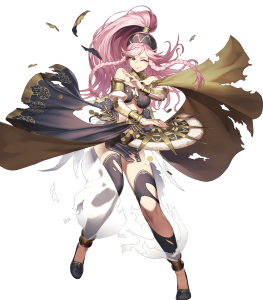 The introduction of a Wo Dao-esque dagger finally allows dagger units with good Speed and low-ish Attack to shine - by throwing carrots. Just like how the Wo Dao sword allows these sword units to output good damage, the Lethal Carrot allows units like Performing Olivia to be a credible offensive threat.

One of the biggest perks of Lethal Carrot is that it can be refined, granting Olivia a desperately needed boost to her bulk in the form of extra HP. It is critically important that Olivia be able to double her opponent, so take the +Spd refine. Moonbow pairs well with Lethal Carrot’s effect, as the low cooldown maximizes the ease of activating a Special. Olivia’s Attack isn’t high enough to make good use of Glimmer, so pick Moonbow instead.

Fury grants a great boost to all of Olivia’s stats; the post-combat recoil isn’t of particular concern since Olivia’s primary role is to dance and support her team. The recoil damage can be taken advantage of by running Desperation, but this results in sacrificing the powerful utility of Wings of Mercy or Blaze Dance.

Running dual Ploys allows Olivia to make good use of her decent Resistance stat, particularly since she should be running Fury. Spd Ploy maximizes Olivia’s ability to double, which is critical due to her needing to double to activate Moonbow reliably (if the enemy can counter). Atk Ploy is recommended over Def Ploy due to Olivia’s bulk issues - landing Atk Ploy on her opponent effectively increases her bulk by 5, which is enough to prevent her from seriously risking getting KO’d in a single hit. Def Ploy can still be taken for more damage, particularly if another ally is already providing an Attack debuff.

As a dagger-wielding dancer, Performing Olivia has access to the Kitty Paddle and Poison Dagger weapons, which grant her effective damage against mages and infantry, respectively. While her offensive stats are not the best amongst daggers, they are still solid enough at 28/34 base that she can contribute offensively while retaining as much team support as possible.+ATK IV is very important for this setup, as every point of attack matters for Kitty Paddle and Poison Dagger. The choice of the two daggers is mostly up to preference: Kitty Paddle does more damage and targets mages (kills mages with 63 or less physical bulk), whom Olivia is effective at fighting due to her good magical bulk (65 with Fury). Poison Dagger allows her to have a broader range of units that she can attack (kills infantry with 58 or less physical bulk), as well as being easier to access due to not being locked to a seasonal unit. However, watch out for Distant Counter infantry such as Ike that can survive her attack and kill her on the counter.

For the B slot, Wings of Mercy is standard on all dancers, as it allows for significantly increased mobility for the entire team. Blaze Dance is a decent alternative for budget purposes, but you should really try to get access to Wings of Mercy if possible.

C Slot and Seal have a lot of variant options for Olivia. She has good enough resistance to run Ploy skills, and running both Def Ploy and Atk Ploy will work nicely for setting up both herself and her physical damage dealing teammates. She can also run Hone Atk and Hone Spd seal for buffing purposes. Hardy Bearing is an option to deal with pesky Vantage Distant Counter units. Attack+3 seal will increase her kill range further.

This build aims to utilize Olivia’s base Dancer’s Fan+ to maximize her support capabilities. When Olivia initiates combat with this build, all adjacent allies will be healed for 21 HP. This can allow her to substitute for a conventional healer, while still being able to provide massive utility through Dance.

The +Spd refine is chosen for the weapon along with a +Speed IV primarily for defensive purposes. With this build, Olivia really isn’t going to be doing a whole lot of damage, so it’s more important that she avoids being doubled to minimize damage taken.

Fury is once again chosen for the overall boost to Olivia’s stats, but Distant Def is an option for budget, as this build is not intended to deal damage. Keep in mind that Distant Def won’t help keep Olivia safe when initiating combat in order to activate her heal.

Wings of Mercy allows Olivia to teleport right next to units with less than 50% HP, which is perfect because those are the same units that likely want to be healed. Windsweep or Watersweep are alternative options that will allow Olivia to stay safe when attacking to activate her heal.

Breath of Life is chosen for the C slot and Seal in order to maximize the amount of healing Olivia can output. The seal can be replaced for Phantom Spd if running Windsweep or Watersweep. You will lose 7 healing per turn, but that may be a worthy trade if it helps keep Olivia alive.

With the Rhythm (Debuff Support)

This build seeks to take advantage of dagger units’ unique ability to mass debuff enemy teams. In particular, Smoke Dagger applies an incredibly debilitating debuff to all four stats, which can be devastating in the proper application. Take the +Spd refine as it significantly contributes both offensively and defensively.

Glacies is chosen as the special for maximum damage, though Iceberg can be chosen instead for a faster cooldown. This build will likely see more than one combat, so it’s easily possible to get a Glacies or Iceberg activation to happen.

As always, Fury is an excellent choice due to the increase in all of Olivia’s stats. It is better than Distant Def due to the speed making it easier to activate Windsweep or Watersweep, but Distant Def will still work on a budget.

Windsweep and Watersweep allow Olivia to safely apply the Smoke Dagger debuff on Player Phase. The choice between the two is up to preference, as both are equally useful.

Spd Ploy is recommended for the C slot to help ensure that Windsweep or Watersweep can activate, but it’s not strictly necessary, especially if running the Phantom Spd seal. Any other C slot can work, based on preference.

Phantom Spd seal is essential to ensuring that Windsweep and Watersweep can activate against even the fastest of enemies. However, it can be dropped if running Spd Ploy, since the speed debuff can still make it fairly consistent to activate Windsweep or Watersweep. In this case, Distant Def is a great seal, as it will make Olivia tankier on Enemy Phase, and allow her to survive more easily in order to apply Smoke Dagger.

Performing Olivia is a dancer that utilizes daggers as her weapon of choice. She brings incredible utility to any team, as she is capable of dancing for units as well as utilizing her daggers to debuff enemies, or potentially even kill certain ones outright. She can also run a pseudo-healer build, allowing her to take on multiple support roles at once.

Olivia also has a solid stat spread, that allows her to both have an offensive presence and contribute defensively against mages. While her offenses are outclassed by other dagger units, her ability to dance outweighs her slightly weaker combat ability. Her defense is her weakest point, as she will likely die to any form of physical damage.

Performing Olivia brings a unique amount of support to any given team as a dagger-wielding dancer. Her ability to fulfill multiple support roles at a time means that she can easily fit into any team composition, and will always be a strong asset for the team.

Performing Olivia is not only capable of providing excellent support, but she can also provide multiple types of support all with a single build.

The types of support she can bring include Dance, healing (with Dancer’s Fan and Breath of Life), debuffing, and buffing. She can even be a competent combat unit.

While not the top of her weapon class, Olivia has decent 28/34 offenses, that allow her to be a competent combat unit via Poison Dagger or Kitty Paddle.

Even when building Performing Olivia to be a combative unit, she still provides excellent utility to the team with Dance at the bare minimum.

With 62 magical bulk (65 with Fury, or 68 vs. ranged with Distant Def), Olivia can handle taking a hit from a mage.

Olivia’s magical bulk combined with her ability to wield Kitty Paddle make her a decent anti-mage unit, while still retaining her support capabilities such as Dance.

With only 50 physical bulk, Olivia is liable to die to a stiff breeze.

This can be mitigated with Windsweep, but she still needs to be careful when dealing with physical damage dealing enemies.

Even with Poison Dagger and Kitty Paddle, Olivia will always be limited in her target choices.

As a colorless unit, Olivia is susceptible to being countered by raven tome mages.

While this can be countered by running Cancel Affinity, it’s not worth losing the utility of the other recommended B slots such as Wings of Mercy.

Teleporting colorless dancer with a turn-1 Special up her sleeve. Good at tanking mages if you need her to. Debuffs Atk/Def/Res -7 on surrounding enemies when she lands a hit.

This passive build aims to make her very difficult to take down without a brave weapon or bold fighter. Sporting 58 physical and 64 magical bulk, she is likely to survive a single hit from the overwhelming majority of units, notable exceptions being +atk M.Grima, +atk L.Hector, Lilina, and Sanaki. If she is attacked, she will accumulate 2 or 3 charges toward miracle. If she is able to accumulate three charges, one more finishes charging miracle, so she can safely attack any opponent that will not retaliate twice in order to open a hole in enemy defenses.

C and S slots are very flexible - atk smoke and spd smoke are very strong choices, but will not activate unless she attacks or is attacked. She can also choose fortifies if the team needs those more, or switch to drives, which are panic-proof and tactically more flexible.

Small investment. Changes to this unit would be giving her a Ploy skills for her team support thanks to her res boon and her weapon as her current weapon needs to either debuff or deal better damage as her low attack is leaves a lot to be desired

My Performing Olivia.
Standard Dancer with Fury and Wings of Mercy. Uses Smoke Dagger to give her a passive debuffing role as well.
Would love to run a poison dagger set but I don't have the right IVs ;-;

With a +ref refinement. My olivia laughs at anything magic! she reaches 52 res when attacked! this is of course combined with summoner support, ally supprt, hone res and spur res. Even rein dies upon olivia's retaliation. 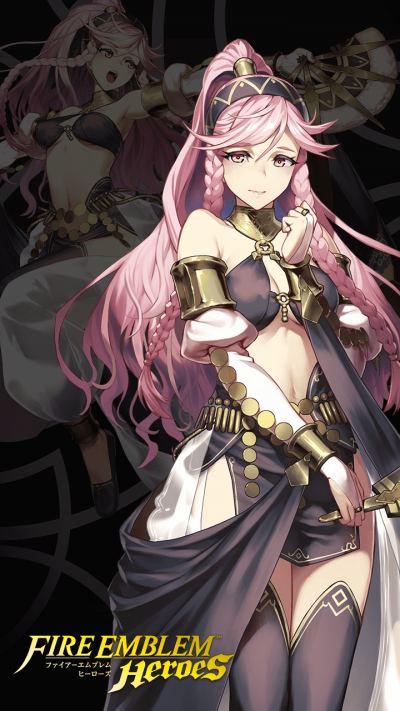