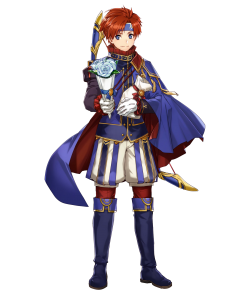 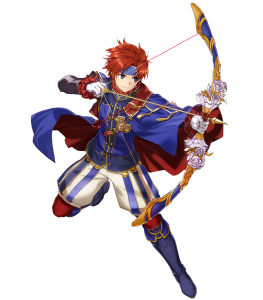 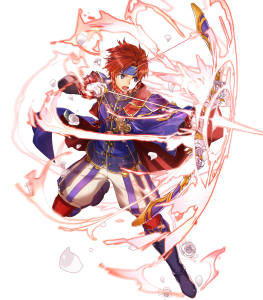 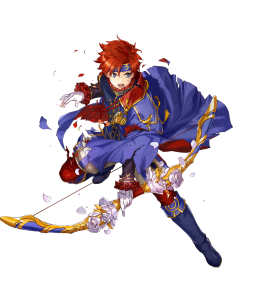 This defensive take on Valentine Roy utilizes his respectable mixed bulk in conjunction with Guard Bow and Distant Def in both his A Skill and Sacred Seal. Added in the 2.0 update, Guard Bow benefits more Enemy Phase oriented archers with a respectable 12 Mt along with a built-in Distant Def to boot. This set mimics Faye's catch-all ranged build with the difference being Roy has access to cavalry buffs, adding on to his already impressive bulk.

Reposition or Swap is the Assist skill of choice as they both help in positioning Roy to tank hits for his squisher teammates. With all this Resistance stacking, it's fairly obvious to take a Resistance-scaling Special. Assuming the enemy doubles Roy, Iceberg will always proc on Roy's follow-up attack due to its three turn charge. With a +18 Defense and Resistance Boost from all three sources of Distant Def, one might think that the focus on improving Roy's defenses is excessive and unneeded. However, Roy wants to take as little damage as possible to stay above Quick Riposte's 70% HP threshold; otherwise, Roy's damage output will be severely hampered.

Due to Distant Def's scarce availability, Fury works as a more budget-friendly option, but the 6 damage suffered post-combat can easily knock Roy out of Quick Riposte range. If taken on a cavalry team, pick whatever cavalry buff will benefit your squad the most, but note that Roy himself wants to receive a Fortify Cavalry buff. On a mixed team, Def Ploy synergizes well with his above average Resistance and can activate on most physical damage based units due to their poor Resistance on average.

A basic offensive set that emulates the power of Reinhardt, but without a legendary weapon or access to the Weapon Triangle. Because of his outstanding 35 Attack, Roy's first two shots of his Brave Bow will often deal lethal damage to units with middling Defense, especially if paired with the classic Quickened Pulse Moonbow combo popularized by Reinhardt.

Your Special can be swapped out depending if you want to run the Quickened Pulse Seal with Draconic Aura and Luna being the best three-charge options. Assists can similarly be changed, but Roy's increased movement makes him an excellent Reposition User as he can easily traverse the map, positioning his teammates for offensive or defensive setups.

Death Blow is the best offensive A skill for Brave Bow Roy as it essentially adds an additional 12 damage on initiation, securing many more KOs compared to other options. The B slot is quite a bit more flexible as multiple skills each offer their own unique niches that Roy can find beneficial. Quick Riposte is the most obvious way to patch up Roy's poor Speed and gives him a fairly threatening Enemy Phase when above 70% HP. If you want to go full-on offensive, choosing a Breaker can give you the extra firepower to get through bulkier units.

Another viable build choice would be to take Desperation on Roy's B paired with a Brash Assault Sacred Seal with the objective of getting Roy below 50% HP. When Roy meets this threshold, he will make four consecutive, uninterrupted shots that very few units can survive. While this Brashperation set looks good on paper, keep in mind that reaching this threshold can prove difficult and awkward on some maps.

Lastly, your C slot is team dependent, but if running Roy on a Horse Emblem team, giving him either Fortify or Hone Cavalry will prove beneficial to the entire team. If you find yourself using Roy outside an emblem-specific team, Atk Smoke or a generic Threaten skill should work just as well.

Joining the game as its second cavalry archer, Valentine Roy combines his increased movement with a hefty Attack stat and great mixed bulk to make for an overall solid unit. While hard to surpass the bar set by Brave Lyn, Roy's unique stat distribution gives him some niches that Lyn cannot fulfill, even without a BST boost. He fairs better against dragons when compared to Lyn due to his mixed bulk, but his terrible Speed makes him incredibly easy to double.

Roy's statline is tailor-made for either a Brave or Guard Bow set due to his great Attack and surprisingly high mixed bulk. His native Death Blow combined with his base 35 Attack, a Brave Bow, and a boon in Attack turn Roy into an incredible offensive powerhouse with the ability to receive powerful class-exclusive buffs such as Hone Cavalry acting as the cherry on top. However, Roy's mixed bulk also allows him to run a fairly strong Enemy Phase set focused solely on his combat against ranged threats.

For a ranged cavalry unit, 35 Attack is phenomenal, enabling Roy to secure kills against bulkier threats and burst down squishy targets.

With a physical/magical bulk of 61/64, Roy is able to effectively take on the role of a mixed tank.

Along with having increased movement, Roy has the ability to tap into class-specific buffs, vastly improving his offenses and defenses.

Even with his impressive defenses, Roy will almost always get doubled due to his 19 Speed, threatening his overall survivability.

For those worried about arena score, Roy won't score too highly due to his ranged penalty combined with his cavalry penalty.