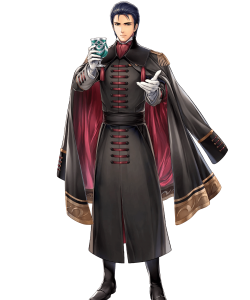 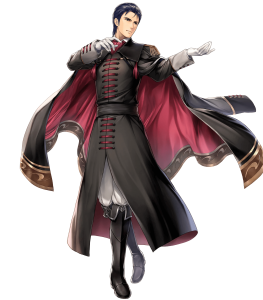 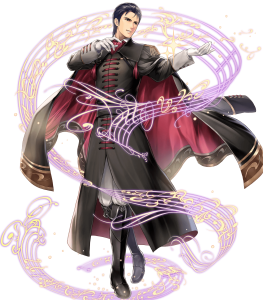 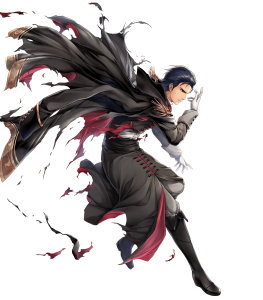 -SPD: Since Reinhardt’s tome allows him to strike twice with no care for his Speed, he can easily take a -SPD Flaw since his Speed stat is too low to make effective use of without significant investment.

Magic is Still Everything! (Offensive Support)

Soiree Reinhardt combines all of the strengths of his regular incarnation but adds in the ability to Dance for his allies. His statline is near identical to his blue cavalry mage version, except he has slightly more Attack, a green instead of blue tome, and flying mobility instead of cavalry mobility. In many ways he can be considered a stronger version (aside from color) with far more versatility.

However, Soiree Reinhardt also has a few drawbacks compared to his regular version. His status as a flier brings a weakness to archers, though this isn’t much of a concern since he really shouldn’t be getting attacked in the first place. In addition, his heavy Player Phase-oriented nature means that his ability to Dance for his allies is mutually exclusive with his ability to attack enemies; he can only ever do one or the other on his turn.

Overall, Soiree Reinhardt is an incredibly potent unit thanks to the combination of his offensive power and his ability to Dance. While he can only ever do one or the other on any given turn, the fact that he has the option for either gives him fantastic versatility on a team. He also has the option to simply not equip Dance so he can benefit from Refresher support from allies (like Legendary Azura).

As a green version of Dire Thunder, this tome shares pretty much all the major pros and cons. Striking twice with no care for Speed allows Soiree Reinhardt to output tremendous damage with little risk to himself.

Soiree Reinhardt’s status as a Refresher gives him a huge amount of versatility, as he can allow other allies to act again when he is not busy attacking enemies himself.

Flying mobility is already powerful on its own, but Soiree Reinhardt’s status as a flying Refresher makes it especially potent since he can provide a ton of support for his team via Dance as well as other mobility-based skills like Guidance or Ground Orders.

While Soiree Reinhardt has fantastic utility with Dance and also has a fantastic offensive presence thanks to Vafþrúðnir, he is stuck in a position where he can only ever choose one or the other on any given turn; so while he has a great deal of utility to bring to a team, that utility is somewhat limited in scope.

As a limited seasonal unit, Soiree Reinhardt is difficult to obtain multiple copies of for merging or obtaining ideal IVs.