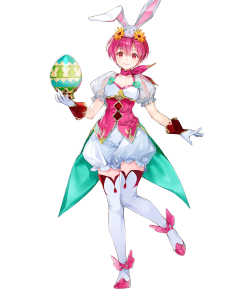 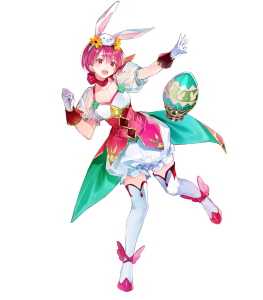 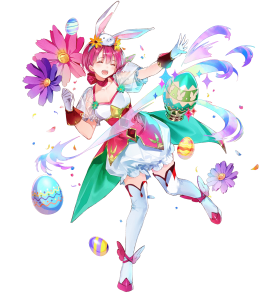 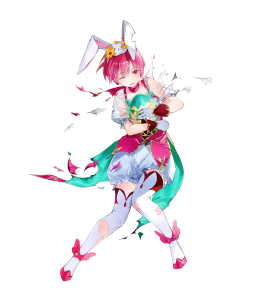 Rely on Me! (Vantage)

One of the biggest issues in modes like Aether Raids and Arena is the fact that debuff skills are so plentiful. Thanks to Est's prf, she can neutralize stat penalties on herself while increasing all of her own stats, just by having an ally closeby.

Spring Est has a decent statline for stat stacking, or increasing all of her stats to make her an excellent all-rounder. Her base kit exemplifies this by granting her +9 to all stats.

Despite Est's fantastic prf, her default Speed is still 35. While this can be improved by utilizing her prf and getting a Speed boon, it still makes her vulnerable to fast units and puts her at risk if she can't oneshot an opponent.

Spring Est is reliant on her prf's restrictions to perform well, namely that she has to have an ally within two spaces for it to do anything at all. This isn't a particularly difficult restriction but still makes her powerless in comps that utilize Smite or Dance to send a unit far away for an attack.

Spring Est is a flying blue mage whose offensive spread sets her apart as one of the best units of her class. With her personal tome, the Eagle's Egg, and the rest of her base kit, Est has the potential to essentially erase anyone who she crosses, especially if she is able to initiate combat on them.

Weapon: Eagle's Egg
Eagle's Egg grants Est +5 to all of her stats and nullifies all penalties on her if she is within 2 spaces of an ally. This effect is incredibly potent, and it opens the possibility to further boost Est's stats by factoring in Tactics, Drives, and Guards, just to name a few options. Overall, Est's personal tome is hard to justify replacing.

Assist: Reposition Reposition is a standard skill for helping Est's allies move around. Est's movement is especially helpful in this case.

Special: Moonbow
Moonbow is a quickly charged Special that allows Est to reduce her foe's defenses and do even more damage. Short-charge skills are easy for Est to trigger, given that she will almost certainly make a follow-up attack.

A: Fury / Swift Sparrow / Death Blow
Est's default Fury 4 allows her to reach astronomical levels of Attack, but there is always the looming threat of recoil damage leaving her vulnerable. Alternatives to Fury, such as Swift Sparrow or Death Blow, are suitable for enabling Est to still reach similar levels of performance on the battlefield while leaving her less open to getting defeated.

B: Desperation / Chill Atk/Res
If opting to keep Fury in Est's A slot, Desperation pairs well to give her the best chance of surviving combat when she initiates while damaged. Otherwise, her default Chill Atk/Res skill allows her to debuff tough foes who she or her allies may have trouble dealing with.

C: Odd Spd Wave / Odd Atk Wave
Est has naturally high offensive stats, but her base Speed of 35 is not necessarily groundbreaking. This can be improved by using buffs and a Wave skill to boost her Speed further and make her even more of a threat. Odd Atk Wave serves a similar function.

Sacred Seal: Swift Sparrow / Death Blow / Even Atk Wave
Swift Sparrow and Death Blow are a perfect way to further improve upon Est's stats and help her take on tough foes. Even Atk Wave synergizes well with an Odd Wave skill in the C slot to give consistent bonuses to Est.