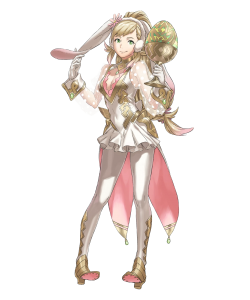 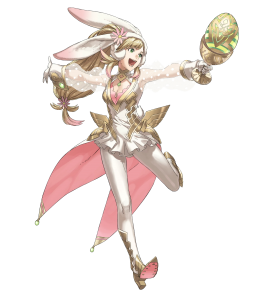 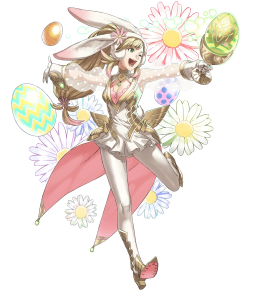 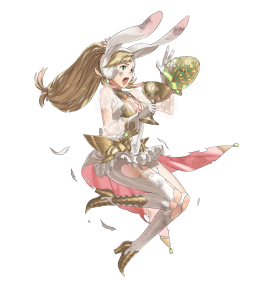 Sharena’s exclusive weapon is reasonably strong after it’s refine, giving her a +4 boost to her stats against foes with 75% or higher HP and an additional +4 boost to her stats when initiating or while she’s within 2 spaces of an ally. In addition, the weapon has the effects of both Chill Atk and Chill Res built into it while also healing allies within 2 spaces by 7 HP each turn.

Spring Sharena’s awful base 16 Defense means that any competent physical attacker will make short work of her, although she can typically survive 1 hit from physical blue foes thanks to her color advantage against them.

Underwhelming compared to her competition

A statstick tome with inbuilt healing doesn’t stand out much when compared to other green such as Young Merric, Pent, and Asbel, who all outclass her thanks to their superior exclusive weaponry and statlines.

Munnin with the Eff refine isn't available yet because lol Gamepress but that's wats being used here. I didn't like the review Sharena got after the refine, particularly with how it says she fails to stick out over other Green tomes when she has a Dual Chill Tome and Healing on top of just extra stats in the right areas, I don't know any other greens that have all that in one. If we're talking offensively then yes Asbel, and Lewyn outclass her easily, but she has her own role that she can perform.

Anyway this build actually makes a pseudo Plegian Dorothea weapon effect thanks to the change in Munnin's Egg, meaning Sharena can lower the highest of each respective stat on the enemy team. Swift Sparrow and Joint Drive Speed are mainly to take advantage of her improved offense due to the refine as well as offering more support thanks to the Drive. I haven't built mine yet because her IVs are bad, but I'm considering using this in the future as it looks very fun.

My +1 S!Sharena uses the tried-and-true budget Fury + Desperation combo. I tried using her native Swift Stance skill in an enemy phase build to bait mages, but I felt that her weapon was better suited for offense if not merely support.

This is a low Investment build that can be run on any Spring Sharena, even if its -Attack and -Speed.

This can survive a Fury Nino and a Chill Res Reinhardt with QP Moonbow.

*Note this is with S rank Summoner support*

This is the true form of Sharena and she is a great unit. With her high spd and good weapon, she fill a role that only Soren can compete with her in, a strong team magic debuffer. With Muninn&#039;s Egg giving her the ability to debuff the res and atk of the slowest unit on the enemy&#039;s team, she can not only hit harder, but also help out her allies absorb more hits. Swift Sparrow is strait forward and helps her two best stats, her atk and spd. Chill Spd 3 is used to debuff more of the enemy, and it helps her deal with fast sword and magic units like Nino and Ayra. C skill is up to team preference, but skills like spd smoke and atk smoke are some good options when not supporting allies. The seal is heavy blade for one reason, it helps her proc specials. If she attacks the enemy that was hit with the atk debuff, with swift sparrow and a atk buff, such as hone atk or atk tacit she will have enough atk to hit the enemy and get glacies ready for the next fight. If you want more scoring then you can go with Ather witch, with infantry pulse, can achieve the same cool down as glacies.

49/45 is good offensive stats.
Sharena can debuff Atk, Res and Spd with this build and with 36 Res she is a pretty good ploy user.

If you want scoring in Arena, you can replace Fury 3 with Close Counter, Desperation 3 with Wrath 3, reposition with Rally Atk/Spd and the speed+3 with Atk ploy 3.