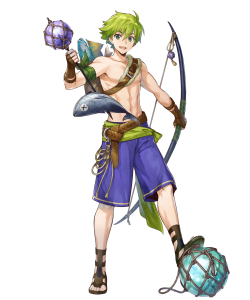 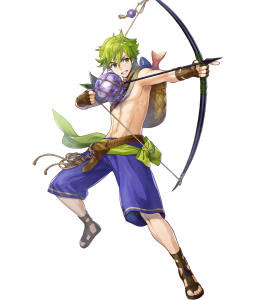 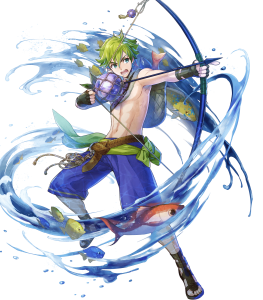 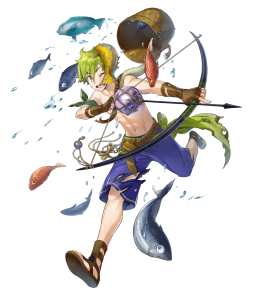 Summer Wolt can perform quite well when equipped with a standard Firesweep build, allowing him to capitalize on his formidable offensive statline of 34/34, access to class-exclusive buffs, and effective five-tile range — all the while remaining impermeable to enemy counterattacks. A Speed Asset is ideal given his dependency on his ability to consistently perform follow-up attacks for his damage output, though an Attack Asset is a great option as well and may even be a better choice depending on the amount of support he is given.

A budget-friendly set that enables Summer Wolt to obtain a fairly respectable offensive presence with minimal investment. Given that this build still takes a primary emphasis on maximizing his combat prowess in the Player Phase, an Asset to either one of his offensive stats remains his ideal choice of IVs.

Remaining ever faithful to his duties as close friends to his liege even during the summertime, Summer Wolt enters the game with a bow in hand, steed by his side, and unwavering loyalty as the game’s second green bow cavalier. His status as such immediately grants him a considerable offensive presence right off the bat, allowing him to benefit from an effective five-tile range and access to class-exclusive buffs. When taken into consideration alongside his respectable offensive statline of 34/34 (which is amongst one of the best for a ranged cavalier), Summer Wolt can easily establish himself as a solid source of damage output for most team compositions and shines when properly supported. In addition, Summer Wolt possesses surprisingly decent physical bulk and is one of the few archers who can safely take a hit from a physical damage dealer without relying on buffs or the effects of skills like Fury.

However, while still beneficial to his offensive capabilities, Summer Wolt’s status as a cavalry unit comes attached to numerous shortcomings, such as an inability to equip certain skills like Sturdy Impact and Null Follow-Up, a weakness to cavalry-exclusive weaponry (which are well in abundance), and hindered mobility when deployed in maps that possess certain terrain like trenches. His magical bulk is also quite lacking and makes him horribly ineffective at facing off against sustained offensive pressure from magical damage dealers; fortunately enough, though, his green color-typing is actually somewhat beneficial in this regard as the majority of magical threats are blue, thus granting him some defensive utility by reducing their damage output against him. All in all, Summer Wolt is a decent unit with commendable offensive capabilities and can definitely shine to his own right when properly built (and supported).

Summer Wolt’s offensive statline of 34/34 is pretty good and enables the young archer to inherently make solid use of Firesweep sets to assert himself as a rather reliable source of damage output.

While Summer Wolt should definitely not be trying to function as a tank anytime soon, his surprisingly good amount of physical durability (for an archer) allows him to safely tank a hit from an opposing physical threat without worry of being killed in retaliation.

Summer Wolt’s status as a cavalry unit grants him access to exceptional mobility and class-exclusive buffs, both of which he can utilize to solidify his offensive capability even further.

Being a cavalry unit comes with a number of various shortcomings, such as a weakness to cavalry-effective weaponry and being hindered by certain terrain like forests and trenches. Most notably, however, it greatly limits Summer Wolt’s potential as a unit by preventing him from obtaining access to certain skills like Null Follow-Up and Sturdy Impact.

Summer Wolt’s magical bulk is unimpressive at best and means that he must take great caution when approaching oncoming magical threats, else he runs the risk of incurring significant amounts of damage or being outright KO’d.

So, bane and boon doesnt really matter for this build cause of the brazen effects. Slaying bow is good with its special cooldown for moonbow. Now use ardent sacrifice to heal one of your units and then your wolt will be in desperation and brazen range. Since there are 2 brazen skills and one goes up to 4, your wolt will be hard to outspeed and he will be doing a lot of damage. Just remember he can't tank damage!

A slot:
That is my "brave Wolt"build that is very good
because he has got relly good offensive stats.
You can rune it with his Brazen Atk/Spd 4 (wich is his &quot;personal&quot; skill that grants him a very good buff for his offensive stats) or or you can run
life and death that equalises the spd -5 from
the brave bow and grants him +5 atk.
B slot:
I run him with Chill speed and I think its very good because the -7 debuff is very good because his 32 spd(in +spd) is not the best.I thin I will use him with Desperation 3 because if he below 75% hp he get so many buff.
C slot:
He hasn't got anything in that slot so I running
him withAtk smoke because if you can't dance him or he can't escape he can die very-very fast so Ithink the atk -7 for the near enemies us so good.
Seal:
I run him with Brazen atk/spd 3 because if he below 80% hp he gains +16 atk and +17 spd so that is a great buff for he.
You can run he with Darting blow too if you don't have that seal in tier 3.
Assist:
His assist skill slot is very flexible.
You can run here reposition,swap,smite ect.
this slot is depend on the team with use him.
Special:
I run he with Astra because I think he can deal the most demeage wih that special.
But you can run Moonbow,Luna or even AoE specials.