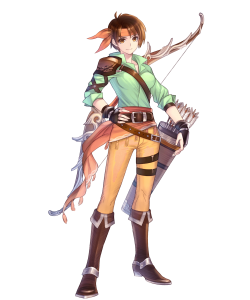 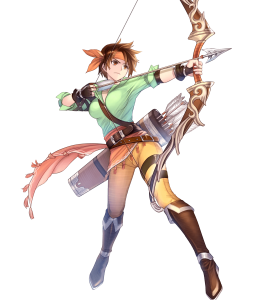 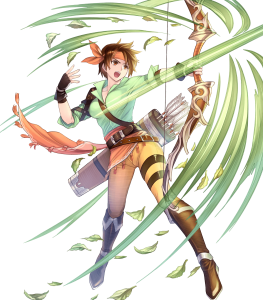 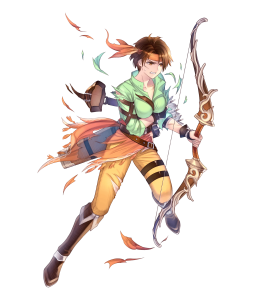 As the daughter of Dagdar from the rather obscure Fire Emblem: Thracia 776, Tanya makes a surprise appearance as a rather generic archer with decent stats overall. Her offensive spread of 30/37 is alright, but not particularly amazing compared to offensive juggernauts like Igrene and Legendary Alm, even if she takes an Attack asset to improve her damage output. Her defenses aren’t much to write home about either, and at 66 physical and 69 magical respectively, Tanya will struggle to take more than one decently powerful attack regardless of its type.

Unfortunately, for the most part Tanya is merely an improved Rebecca, and as such remains outclassed in both an offensive and defensive role by other archers, leaving her with almost nothing noteworthy aside from her statline, which is still unremarkable compared to other archers.

However, Despite not posessing anything noteworthy over other archers aside from a boosted statline, Tanya can still perform reasonably well on both offense and defense thanks to her decent overall statline, should one wish to use her.

Tanya’s status as an infantry unit allows her to use a plethora of skills other movement types lack access to, such as Null C Disrupt and Time’s Pulse.

Tanya’s 37 Speed gives her a great baseline for both performing and avoiding follow-up attacks, especially in conjunction with other Speed boosting skills such as Swift Sparrow.

While far from the weakest of her class, Tanya has little to offer offensively over other archers such as Klein and Legendary Alm, both whom possess stronger offensive statlines and/or exclusive weapons. She also has severe competition in a defensive role, where archers such as Faye and Halloween Jakob handily outclass her as well.

Ideally, tanya would be at +3 to get these sort of stats. Obviously, her offensive traits are her standouts, so I wanted to invest in that. The speed refined bouquet bow would get Tanya up to a flat 40 speed, and she gets 57 attack and 51 speed when initiating. Of course, the investment is extremely expensive; first ya gotta find a free atk/spd solo 3 then make a desperate, although unlikely decision to fodder off a freyja for her solo 3 and pulse smoke. Since solo skills work on both phases, distant defense will allow her to maintain some better mixed phase potential while still retaining 53 attack and 47 speed on the enemy phase

AoE special spam with additional true damage on top. Shining Bow activates more usually than it seems, and with FB4 it means each hit deals 12 true damage, also counted on the special. The rival has to deal with 24 true damage on top of a special activation and a first hit (and a second because she is fast). If the rival is buffed and makes it hard to damage, you attack another one and land panic on them (and maybe damage a little too). Of all AoE specials, Blazing Wind seems the best for ranged units with a + area of effect, but Light can work with x area.

A relatively cheap and effective build for Tanya revolving around the use of non-premium skills and doing very good during Player Phase offensively (for a unit of her caliber).

Candlewax Bow with either +Atk or +Spd will give her the Fury effect which will boost stats by 3 across the board, which helps proc Desperation and allows her to use Brazen Atk/Spd, which ensures that she gets that follow-up before the enemy AND +14 to Atk/Spd once she hits the threshold.

C skill is flexible but I chose one of the Attack Waves for a boost to her attack to help her achieve more damage output, but Smoke skills would work fine too.

Lastly Brazen Atk/Spd seal again helps boost her offensive capabilities once she gets below the HP threshold, which will allow her to engage enemies with minimal issues.

I like halloweeny henry
He’s one of my favourite units in Heroes, but I only really invested in the original…
Hey IS I have a great idea
How bout you guys increase the amount of Grail unit refines we get per month cuz like …
Seeking to be the best swordsman
My goal is always to make my favorites. Fir is one of the franchise’s favorite…
Flow Guard
In light of flow refresh and flow guard, anyone know if NFU can refute them? What…
Legendary Eitri & Mythic Thórr
https://www.youtube.com/embed/jyMA8VvjfRc 340 posts - 48 participants …
Read More