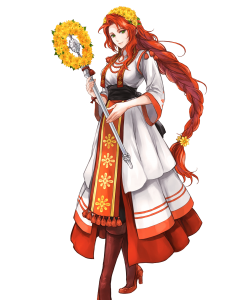 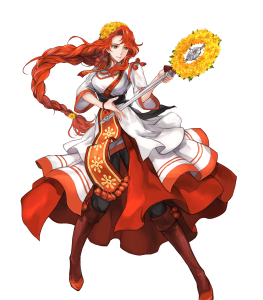 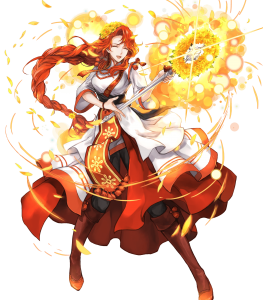 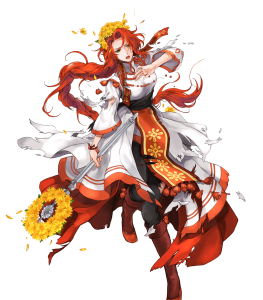 The Most Blessed Smile (Blade)

Blade tomes, to this day, remains an incredibly potent option for offensive mages. Valentine’s Titania can absolutely put this weapon to great use.

What makes Blade tomes so powerful is that they take the total value of field buffs on the user and add it into their attack power. With a buff of six in each stat, a Blade tome will add a staggering 24 damage boost to attacks. As such, Valentine’s Titania with Rauðrblade can be extremely effective, especially since she can easily benefit from Cavalry Buffs. Assist is open to one’s personal preference. Reposition is a generally safe choice for cavaliers, but sticking with her default Swap is also perfectly fine. Since Blade tomes do decrease Special cooldown, she’ll ideally want one of the lower cooldown Specials such as Glimmer or Moonbow. Glimmer is recommended since it’s power is based off of dealt damage, making it a natural fit for Blade tomes.

With the C slot and Sacred Seal slot, Valentine’s Titania can opt to give herself some self buffing through Odd Atk Wave and Even Def Wave. This allows her to gain +12 damage on odd turns +6 damage on even turns without any external support. However, if she can receive buffs from her allies, Wave skills are entirely unneeded. Her good Resistance allows Valentine’s Titania to make use of Ploy skills, particularly with Fury. She can also use a Cavalry Buff such as Hone Cavalry if she’s alongside other cavaliers. The Sacred Seal slot can be alternatively used for Darting Blow or a simple buff such as Atk/Spd 2 or Speed +3.

In Service To Devotion (Offensive Utility)

For not a lot of investment at all, Valentine’s Titania can be a surprising effective multipurpose unit, capable of fighting, buffing, and debuffing effectively all in one.

Valentine’s Titania’s default tome, Loyal Wreath, grants her with a nice all-around stat boost whenever she has an adjacent ally. This is a great weapon choice that enhances her weapon capabilities and needs not be swapped out, though one can do so if they feel another weapon would be more beneficial. If her chosen weapon can be refined, it is recommended to refine it for Speed or Resistance. Speed will help her to secure more follow-up attacks while Resistance will help her to resist magical attacks more easily while increasing the usability of Ploy skills.

The Assist will be a matter of player preference, though a movement Assist will need to be used with a Link skill. Valentine’s Titania comes by default with Swap and works nicely, but can be swapped out for one’s own preference. Reposition is a safe bet with most cavalry. For Special, using either Moonbow or Glimmer is recommended due to the low cooldown of these Specials allowing them to be used with good consistency. Iceberg is another valid choice thanks to Valentine’s Titania’s good Resistance.

Fury makes for a very fitting A slot choice, improving Valentine’s Titania’s all-around stats which naturally improves her offensive and debuffing capabilities. While Fury 4 is stronger than Fury 3, it is not necessary at all and Fury 3 will work absolutely fine. Atk/Spd Bond is another good option that synergises with Loyal Wreath, granting extra Attack and Speed whenever adjacent to an ally. Valentine’s Titania’s default Atk/Res Link is a great B slot choice for this build. Not only does it let her gain buffing utility through granting a large Attack and Resistance boost to whoever she uses a movement Assist on, but will also get the buff herself and this skill will still activate if it’s her ally which uses the movement Assist. If she’s providing buffs through her C slot, she could instead opt for a Chill skill such as Chill Spd to gain extra debuffing utility.

Last but not least, thanks to her strong Resistance, Valentine’s Titania can use her C slot and Sacred Seal slot to run double Ploy skills in order to gain debuffing utility. Which Ploy skills are used is entirely up to one’s own preference with all of them being available in both slots. Spd Ploy and Res Ploy in particular will both greatly benefit Valentine’s Titania herself, hence why they are the recommended choices. If she’s on a cavalry team, she can utilize a Cavalry buff such as Hone Cavalry in the C slot instead. As alternatives for the Sacred Seal, Distant Def will increase Valentine’s Titania’s ability to resist enemy mages while a simple stat boost such as Atk/Spd 2 will give her one last offensive boost.

With 30 Attack and 33 Speed, Valentine’s Titania is not too shabby when used offensively. While neither stat is standout by any means, she can easily make use of various skills and buffs in order to increase her offensive capabilities substantially.

At 30 Resistance, Valentine’s Titania is capable of resisting magic fairly well. She is capable of taking a couple of hits depending on the opponent, but one should not expect her to act as a magical wall since her low HP hinders her ability to tank magical hits for very long. On top of this, Valentine’s Titania can make good use of Ploy skills, adding to her ability to function as a support unit as well.

Cavalry in general have two distinct advantages to other movement types: movement range and ease of buff access. With a natural movement range of 3, Valentine’s Titania’s has amazing reach and can easily cross a large portion of a map in order to get into position or attack an opponent. On top of this, Cavalry Buffs are easily accessible and can be used to give Valentine’s Titania a quick, easy, and very effective boost to her combat capabilities.

With 35 HP and 17 Defense, Valentine’s Titania only possesses a physical bulk of 52 and is very susceptible to physical damage. She will also be vulnerable to dragons as they’ll target her Defense rather than her Resistance. It is advised to keep Valentine’s Titania out of the range of physical foes and dragons unless absolutely necessary.

Cavalry also have a fair share of weaknesses. Most notably, cavalry are hindered by terrain more than any other unit type, being completely unable to move through forests and being greatly hindered by trenches. Cavalry also suffer from the lowest BST of all movement types, resulting in them having lower stats overall and being a general poor choice for those looking to score highly in Arena.

You can mix up the Bond and Link skills and seals depending on what you have to hand - her Def is always useless, but the other three stats are all fair game. And the C slot is flexible.

"Stand by me, or else I'm not strong. Once you are there, we can kill them all!"

This is a hyper-synergy build for Valentine's Titania partnered with Marth or MCorrin (or other Spur/Drive buffer).

Field buffs:
Atk/Res Link + Joint Hone Speed gives both parties an additional +6/+5/+0/+6 when Marth uses a movement skill (or she can give it to Marth if needed.

With her link letting her self-buff and her res refined weapon and A skill active, she can hit 37/56/36/20/46 without external sources of buffs. If she has buff support, her B skill could be Quick Riposte to allow for Distant Defense seal to be used. She'll make an excellent magic soak.

her speed is pretty much solid. she appreciates all the atk and res she can get. fury makes desperation and brazen atk/res proc faster. fury 4 would be too much on her low hp pool.