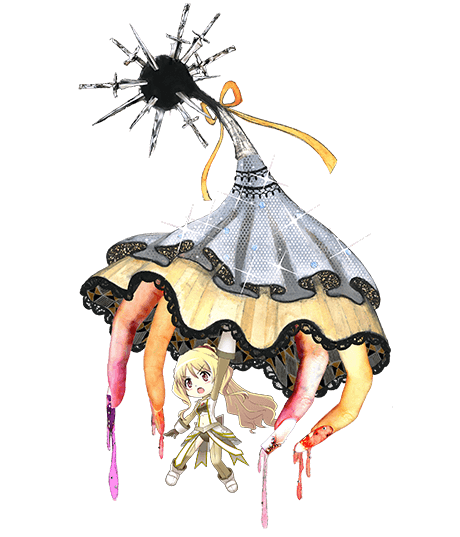 Doppel Detail (May Contain Spoiler)
The master of this emotion cares not where its power fly. This Doppel attacks with its huge fingers, along with the many fingers that fly around it. All the nails on the fingers are polished and decorated. It cares very much about its nails. When someone praises them, it becomes quite happy, but when someone says something bad about them, it gets discouraged and depressed. It is quite troublesome to deal with when this happens, so it is a good idea to let it attack the enemy as soon as you summon it.

Elfriede is derived from Aelfthryth, which means “elf-strength”. In Germanic-speaking cultures, elves are thought of as beings with magical powers and supernatural beauty, which would certainly describe a magical girl.

Nails in and of themselves in dreams can mean hard work that is done for practically nothing. Considering witches spring from magical girls, no matter how many witches are defeated there will always be more.

Nails can also mean that a person is too worried with how they are perceived by others. Eflriede’s description notes that the doppel is “excessively concerned with their upkeep” and requires constant praise. When fingernails are dirty, this can symbolize dishonor and disgrace. According to Judaism, nails are dead matter which represents death and the mortality of human beings.

Manicured nails can symbolize a desire to take initiative, as well as confidence but with a feeling that others are underestimating your beauty.  Dreams of getting manicures done means that person needs a change in their life that they cannot accomplish alone. Bright fingernail colors also indicate love life. This would tie into Momoko’s wish to have the courage to confess her love and her lack of self-confidence due to her perceived lack of femininity.

In Norse mythology, nails also represent the Axis Mundi, the point about which the heavens rotate. This would tie into her magia attack “Edge of the Universe”.

Elfriede’s ‘head’ has several swords stabbing through it. Swords stabbing something could represent feelings of jealousy or being wounded by someone else’s actions. They also could mean feelings of inadequacy, and unfulfilled desires which tie into Momoko’s wish, feeling she’s not feminine enough for her romantic feelings to come through, and that someone else beat her to confessing to the boy she liked.

Swords are also a masculine symbol and could also represent the various older and younger brothers she grew up with, as well as feelings of being overwhelmed by other people’s behavior without knowing how to ask for space. She grew up a tomboy because that’s all she knew. Alternatively, the overwhelming pressure she feels could come from playing peacemaker between Rena and Kaede all the time.