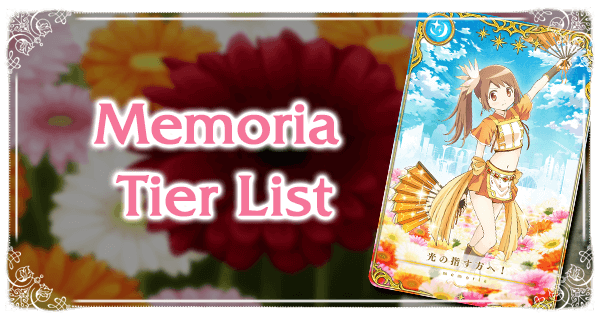 A tier list ranking the various Memoria as they become available in the NA version of Magia Record.

The memoria listed here are tiered according to what is currently available to NA players, and will change as different memoria with new abilities become available in the future. "I Made Friends!" tier will focus primarily on memoria that are still widely in use in the JP version.

Also keep in mind that all Skill memoria start on half their cooldown rate rounded down. So a memoria with a 15 turn cooldown can't be used until turn 7. So some memoria, despite having great effects and great stats, aren't that great for PvP Mirrors.

I Made Friends Tier

The best memorias in-game are here! Even in the JP version of MagiReco, these remain in heavy use.

The most powerful memorias in the game, these memoria can and should be equipped on your best magical girls at all times (outside of farming with event bonuses) for several reasons.

After the Rain - Mito

Offensive Memoria are excellent for both Mirrors PvP and Story PvE battles.

Among the best offensive memoria currently in game, these should be leveled and equipped as soon as you get them.

A Sword Between Light and Dark

The Glasses Girls' Night Out

Reinforcements from Another Time

Hello from the Stairwell
Tier 2

The Heart in the Bouquet

Teamwork on Our First Meeting

The best defensive memoria currently in the game. These should be among the first you max out and equip on your magical girl squads.

Damage cut tends to be better than defense up in terms of passives. The AI almost always targets the girl with the lowest defense stats (outside of element), but doesn't take into account damage cut. Damage cut won't help you as defensively as much as adding defensive stats will, so keep this in mind when equipping your girls. Defense up is better for defense units whereas damage cut is better for offensive units.

Among the best defensive memoria currently in game, these should be leveled and equipped as soon as you get them.

For The Ones I Love

A Wild Welcome in the Sewer

After the Rain - Leila

As a Fashion Model

Past and Future
Tier 2

So Busy After School!

Magia memoria will see less use compared to offensive memoria. They should be mostly paired with magical girls with strong Magia or Acceles bonuses.

Magia memoria and magia attacks are best used in PvE rather than PvP due to magia damage being reduced in Mirrors and the time it takes to build up magia guages. Since number of turns doesn't matter in PvE as much, magia attacks are your best friend when playing events or main story.

Among the best memoria memoria currently in game, these should be leveled and equipped as soon as you get them.

All Three of Us, Going Forward

Shop Away Your Worries!

Ailment memoria have uses in certain boss battles for their stall effects. These should always be limit broken when possible, to maximize their effect rates.

Among the best status ailment memoria in game, these should be leveled and equipped as soon as you get them.

While not as strong initially, these memoria are on par with Tier 1 memoria once they're max limit-broken (MLB).

These memoria have unusual effects, while less useful in standard battle, they can be invaluable in certain conditions.

A Once Empty World

What's Right Before My Eyes...

Some of these memoria are useful mostly for high stats they add when equipped, regardless of their effects. Others are unique in their abilities but are not useful for every girl out there and are used more in a specific niche sense (such as equipping Taunt on a defense unit to draw attacks towards her and away from others).

They're worth keeping around for a rainy day!