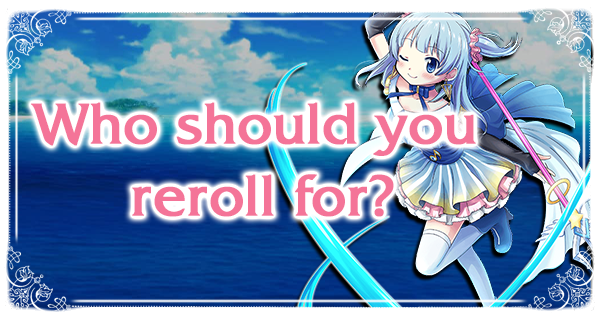 Instead of a Reroll Tier List for the 4☆ Magical Girls available on the English Server Launch, GamePress got exclusive interviews the girls themselves and asked them directly why you should roll for her.

Based on those interviews, we thought we would showcase each of them, each done by the writer that interviewed that girl. 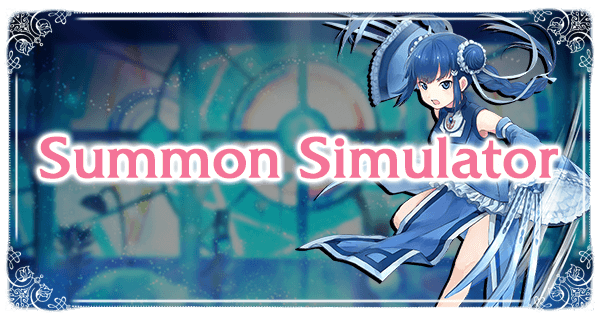 How to Reroll in MagiReco

Use the Summon Sim to test your luck, and check out the How to Reroll Guide for how to reroll with less suffering.

Why wouldn't you want Madoka? She's only the main character of the series that this game is a spin-off of! And would you really want your pre-registration Moemura to start off all alone?

I mean, even if that weren't the case, you can't not want her in terms of gameplay. Her Connect heals you tremendously and she hands you a whopping 30 MP.  Even at a single slot, just pair her up with another Madoka and the two of you can continuously heal and build your MP gauges all day everyday. 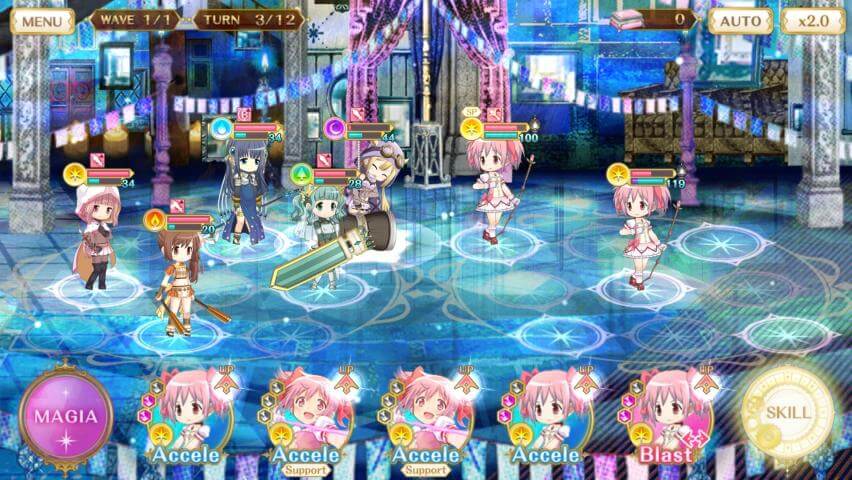 Suit her up with her unique Memoria that pulls all Accele discs and we're talking about serious magic building and ready to throw that Connect on the next turn. That's a smooth 60 MP by the end of your first turn at your poorest. By the end of turn two you've already built up enough Magia to start spamming the Magia attacks on almost every turn while simultaneously building up more MP and keeping you both nice and healthy with an added Defensive boost. And with solid Defensive stats (*cough*the 2nd highest on launch *cough*), Madoka is built to take a hit and keep on ticking. This legendary combo is nigh invincible. 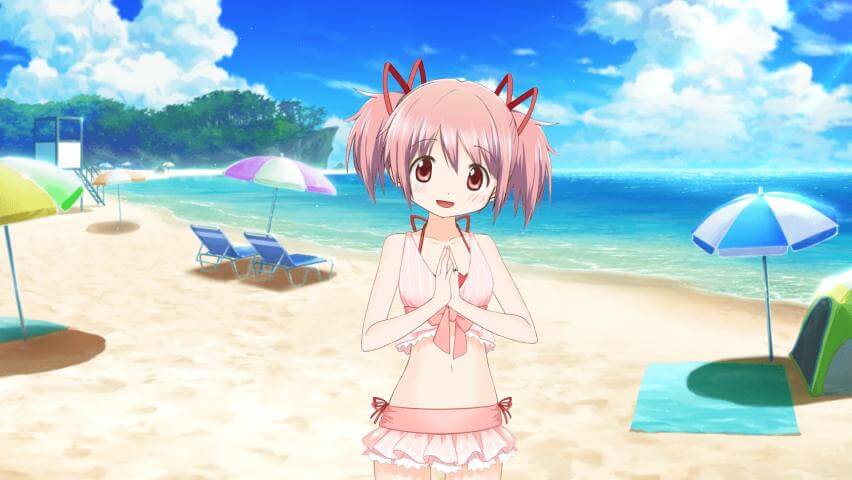 In a team with other girls, she plays a strong support with a balance of discs that suits any style. Double the blast discs, one in each direction, and double the Accele supports high attack Blast teams as well as being perfectly suited for magic building Accele teams. Madoka will keep your team's HP bars filled, allowing you to take down the toughest of Witches and Rumors.

Madoka's  homescreen character will have plenty of cute costumes so you can never really get tired of having her there on screen, gently and happily cheering you on throughout your day. Her sweet temperament, kind heart, and eager spirit are well worth protecting as Homura can attest to.  Besides, Iroha is going to need her Senpai by her side as she traverses through the wonders and dangers of Kamihama.

Do you feel like you need the aid of a reliable and kind senpai? If you’re going to be facing all the dangers of Kamihama, why not let the veteran lend a hand - in baking cakes, organizing tea parties, and, yes, occasionally even blowing Witches to smithereens!

Boasting the second highest ATK in the game at launch, she pulverizes enemies with her muskets, and her Tiro Finale leaves but dust in its wake. And while she may seem like she has lower DEF than others, it matters not! Get her Connect or her Magia charged, and next turn, your enemies will be bound and helpless, unable to act even for a moment! 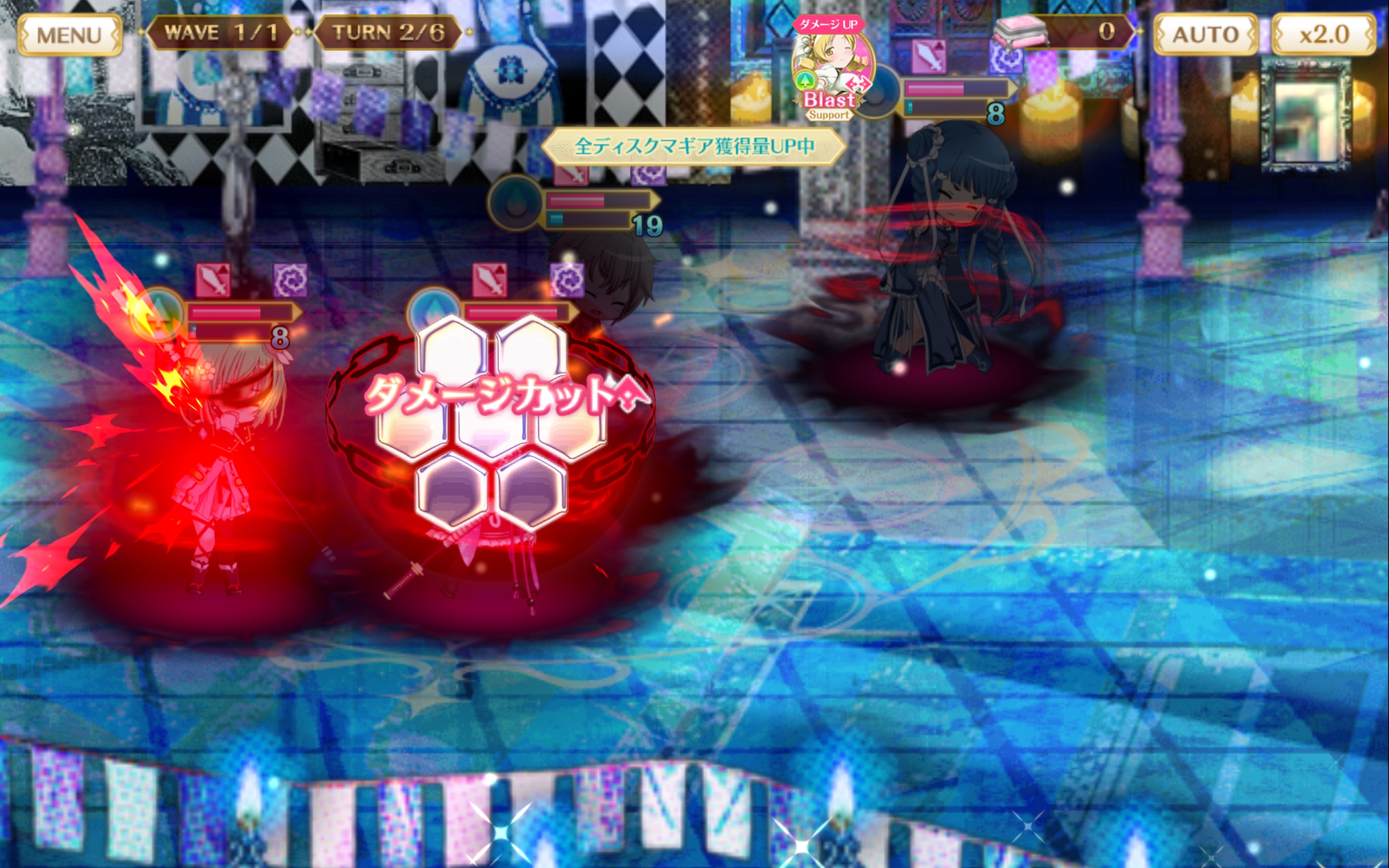 With her disables and binds, she keeps enemies away from her allies with her own way of protecting! Who needs a tank when your enemies can’t even attack?

And that’s not all! She’s got the looks. She’s got the hair. She’s got bounds of experience fighting witches. She’s got the baking skills, the understanding of good tea, and she won’t hesitate to throw a party and let you rest and relax whenever she sees you need it! With her around, you’re sure to find the rest you need to keep on fighting the next day, better than ever! 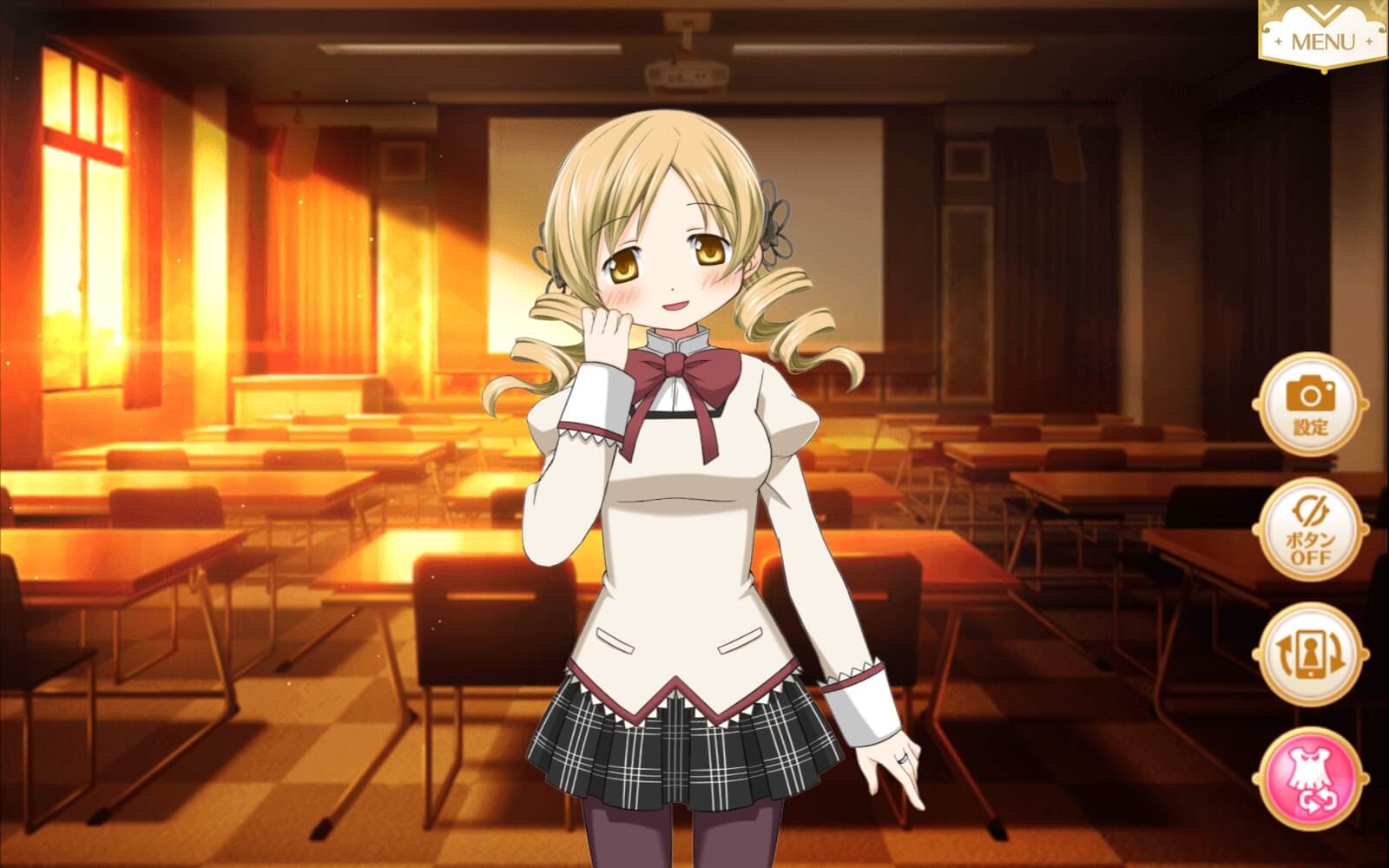 And if you thought one Mami was good, two is even better! Kamihama is dangerous, so take a friend along, and watch enemies be unable to move one inch for entire battles at a time, as the two of them Connect every single turn! And her personal Memoria helps even further with this, allowing her a guaranteed Puella combo on turn one to allow a ready Connect soon after, and leading into ribbon fireworks and defeated enemies!

...Just make sure they’re actually dead first before letting down your guard, okay?

Idol fans, unite! Do you like cute, awkward girls who have a hard time expressing their true feelings, end up seeming blunt and rude, and fear being alone? Then here’s the idol fangirl for you!

Despite being so cute, she also has the highest ATK stat in the game at launch, and also higher DEF than that glass cannon Mami. Due to her triple Accel discs, her Magia gauge refund on Magia use, and her personal Memoria which helps her reach her first Magia, she is capable of spamming her single target Magia very easily, demolishing both witches, familiars, and magical girls alike! 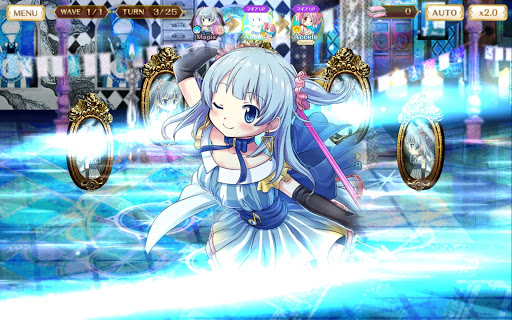 In addition to all this, her Connect buffs damage for others by a large amount, giving them Attack and Crit buffs, in addition to making it easier for her friends to reach their Magia as well, and melts people in PvP thanks to the huge boost in damage. All this sweet, sweet damage right up front, and she stays relevant for a long, long time into the future! (And she has quite the sweet tooth, too.)

Furthermore, her transformation magic allows her to change into anyone else’s form, so by choosing her, you can get everyone else too! And, even if you come across the real one while she’s transformed, you can still enjoy the chaos, as they point at each other, and everybody has a hard time guessing which is which! 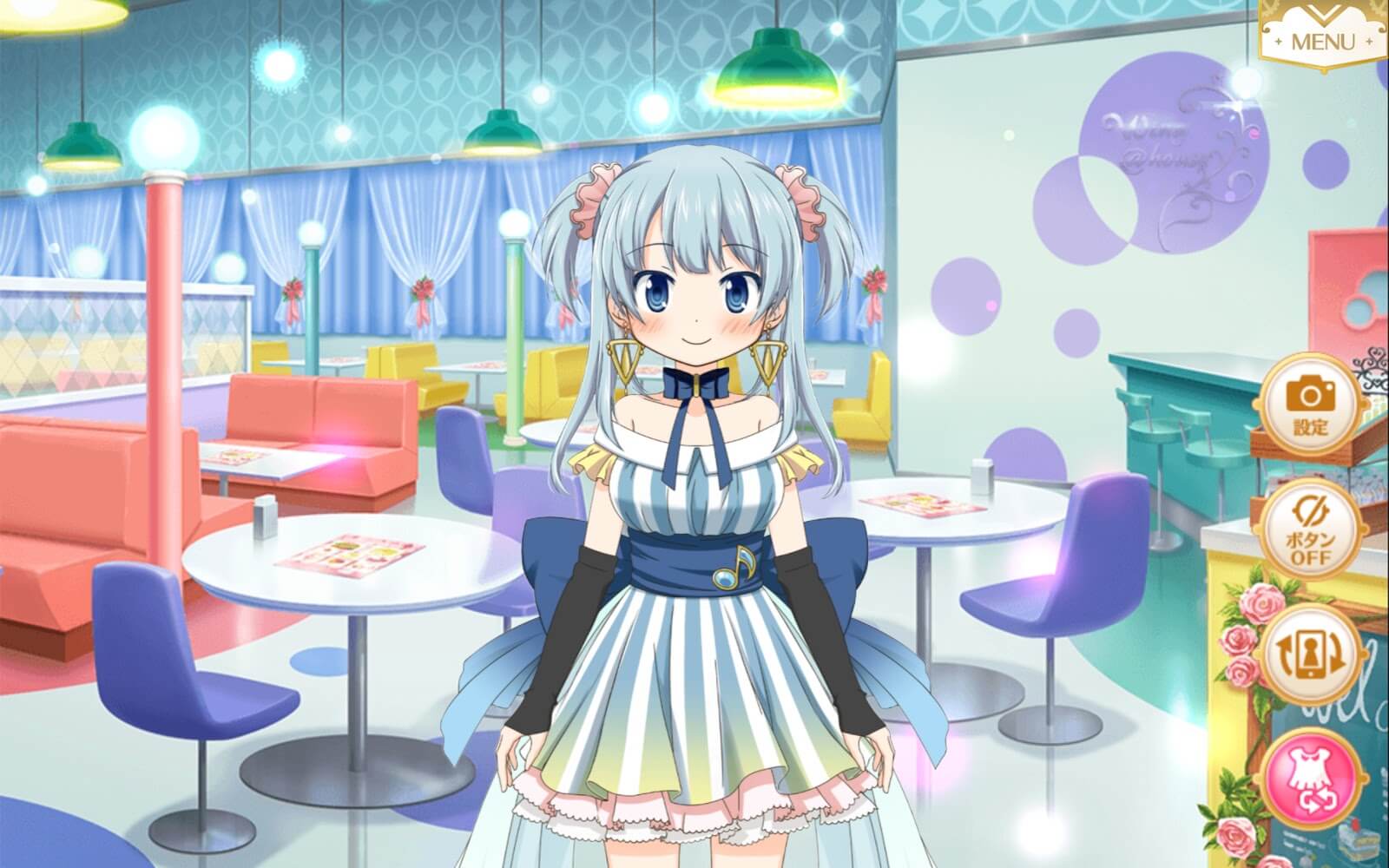 Outside of battle too, she is simply too cute beneath her layer of pushing you away, and her later costumes only further enhance her cuteness to unbelievable levels! Look past her incredibly stylish appearance, into her heart, and see her for the adorable awkward idol fan she is! And then choose her, because you wouldn’t want her to end up feeling alone, would you?

If you are looking for an elder sister kind of magical girl who fights to protect others, then place your faith in Momoko Togame! This passionate warrior brings to the table three Charge discs, balanced stats in attack and defense, and a powerful offensive connect. On top of that, Momoko’s compassion and gentle heart will keep her relevant forever.

Not only does Momoko boast the best abilities of all Charge gorillas currently available, but her dominance in this area will continue far into the future as well. With a Charge Draw personal Memoria, she can guarantee a Charge combo to take down tough enemies, or continue a Charge combo when it would otherwise be impossible. She might interfere with Blast or Accele combos sometimes, but you can always count on Momoko to do her best! 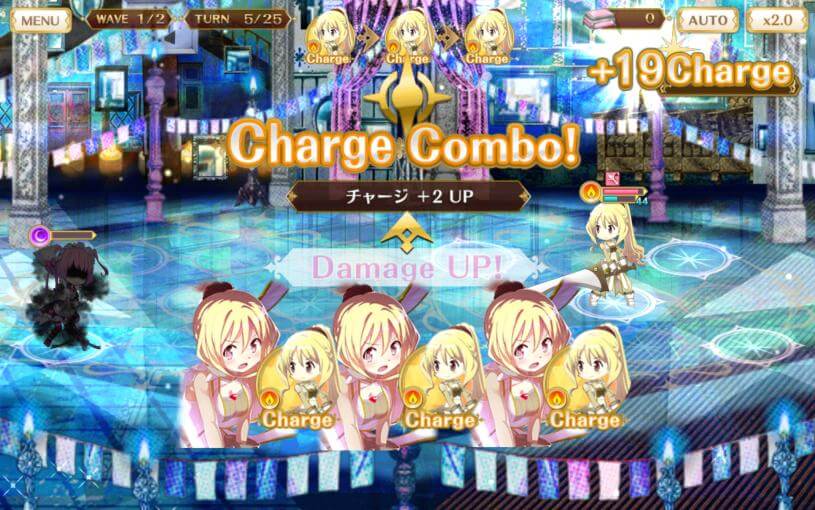 In Mirrors, Momoko’s high HP and sufficient defense help her live long enough to Connect. As the only magical girl currently with Defense Pierce on her Connect, she can help cut through tanks like Kirika Kure. If she Connects using one of her Charge discs, then you will always benefit from her Charge UP ability too. Besides offering a great Connect, Momoko’s Flame attribute gives her an advantage over Mami Tomoe, a high priority target who can sweep teams after Connecting. 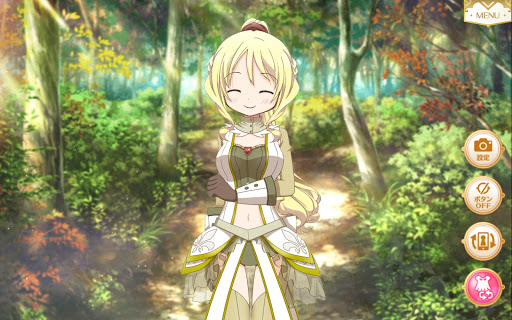 Outside of battle, Momoko’s bright personality and boundless confidence will light up your home screen and your heart. She also rocks an assortment of stylish costumes! What’s not to love?

Want a girl who would lay down her life for her master? Look no further! Kirika Kure, the black magical girl, will take every hit! This murderous berserker would do anything for those she is loyal to.

Kirika is a chunky tank who will take sizeable effort to defeat, and her Dark attribute means that she is never at too much of a disadvantage. Her connect will draw fire to another girl, so use it carefully, but it is formidable at the right times and can help push your team to victory. 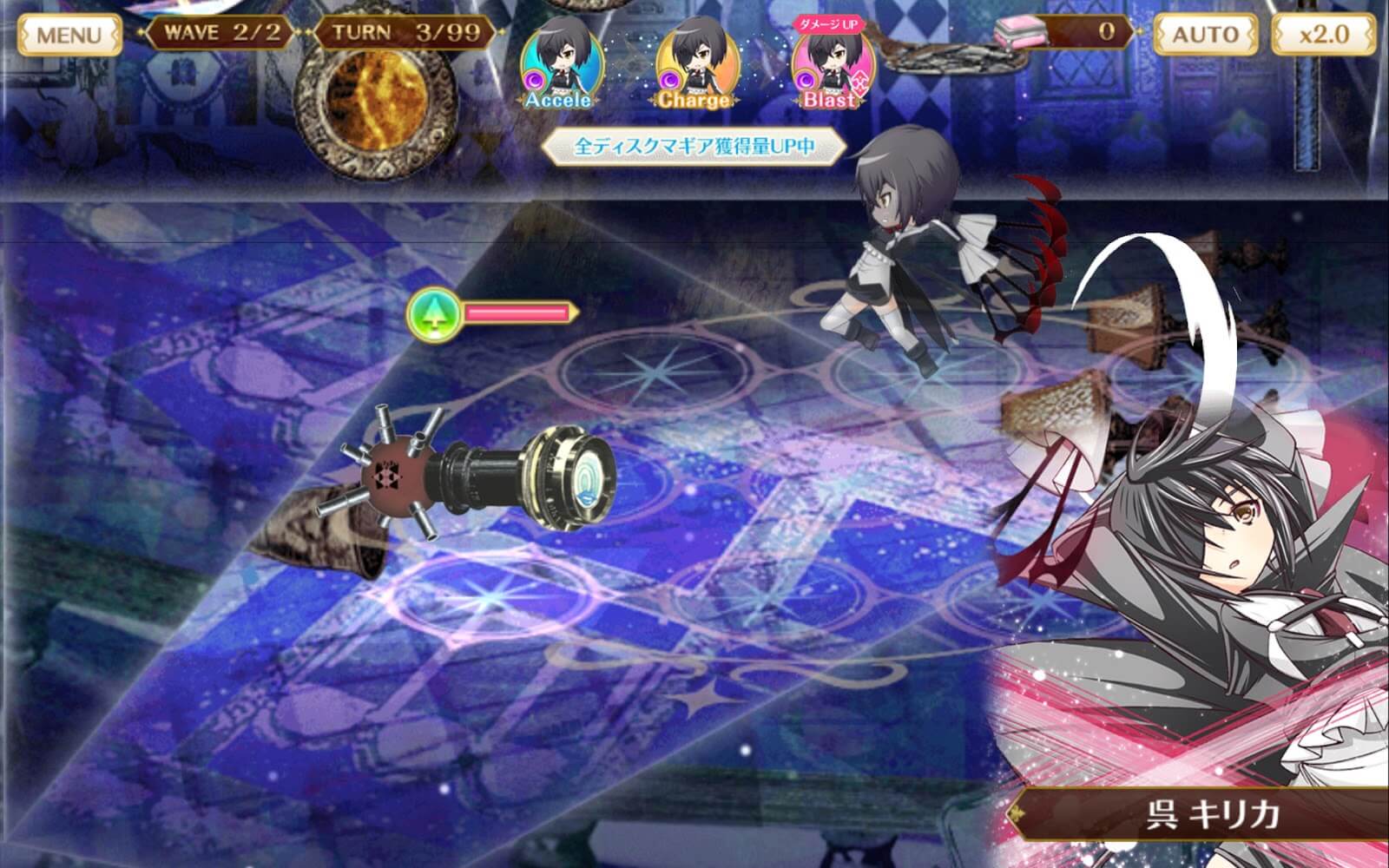 In mirrors she is the strongest girl on launch, and her tankiness will allow your other girls to stay alive and destroy the enemy team. Pair her with a strong attacker to protect, and she will take all the hits so that the attacker may shine. 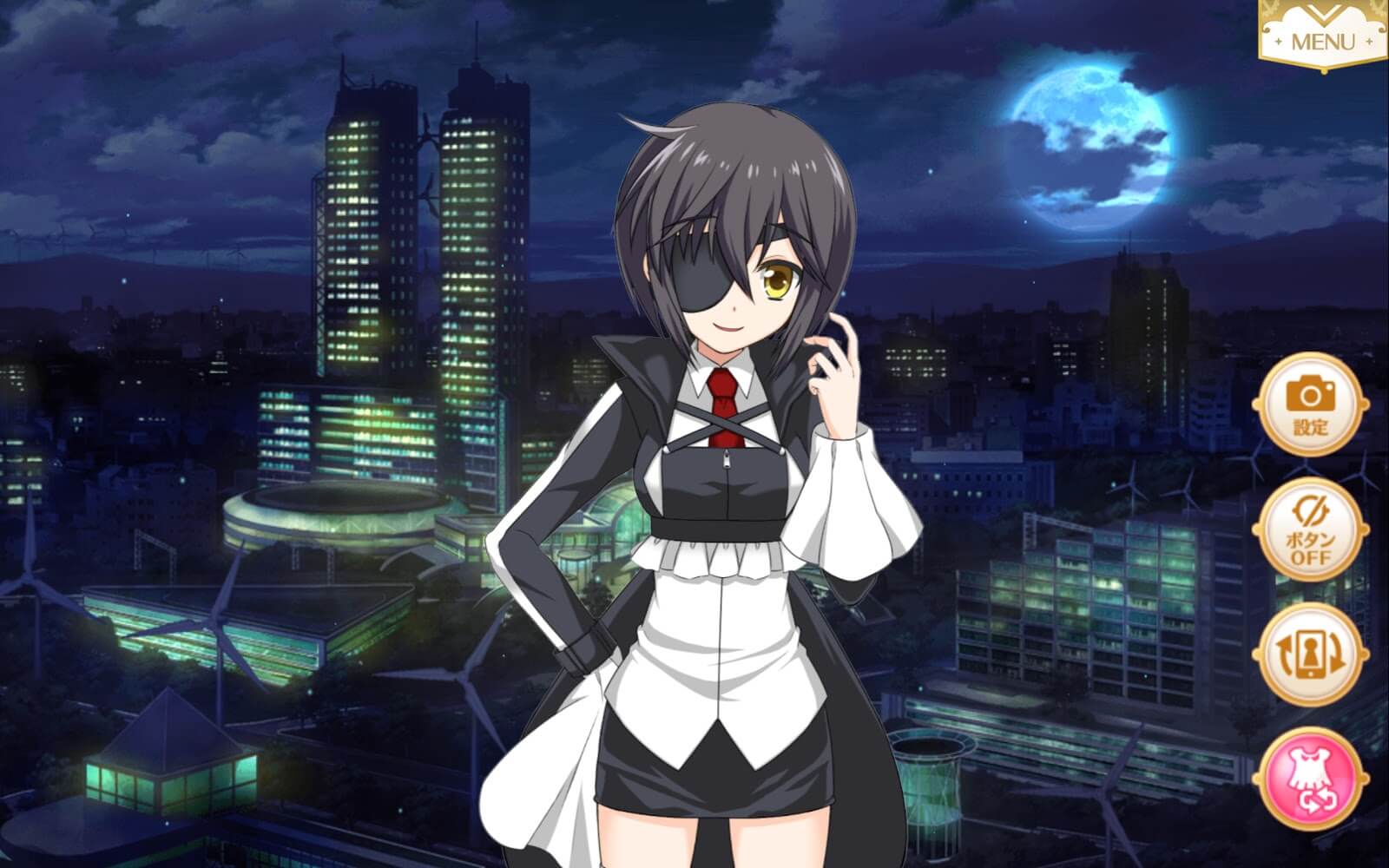 Her ferocious appearance hides a childlike nature, and Kirika is sure to repay your love. Put her on your home screen and play with her often, and she's sure to be almost as devoted to you as she is to her dear Oriko! Just don't neglect her, or you may find yourself cut to ribbons...

Ignore those weaklings. What you want in a magical girl isn’t style and grace, it’s firepower! When it comes to power, there’s no girl who can match Kyoko Sakura’s speed and intensity. With the much sought after triple Blast discs, a connect that can skyrocket another girl’s strength, and an attack stat high enough to brute force though anything, Kyoko sets the standard for offensive magical girls. Just stand back and watch. This will be over quick.

Kyoko is the ideal offensive Blast gorilla, and she’s always ready to fight. With her blisteringly high attack stat, all you need to do is give her a target, or three, and she’ll run them down leaving nothing but trampled remains. While she has trouble charging her Magia, unleashing it will deal strengthened damage to all enemies regardless of their attribute. Her connect let's allies shrug off damage and boosts the power of their Blast discs, so just tap the red disc and the battle is as good as done!

In Mirrors, even Aqua attribute magical girls will struggle to shrug off Kyoko’s fiery attacks. With minimal support she can tear through foes like paper, and if she gets any sort of offensive connect applied to her, let’s just say it won’t be pretty. Kyoko pairs well with other Blast gorillas, and it just so happens that Tokiwa Nanaka has three Blast discs and can power up Kyoko’s Blast damage. With Kyoko as your team’s core, you cannot go wrong.

If you’re looking for a challenge in Magia Record, then try someone else. Kyoko has one job and she does it with the efficiency one would expect from an experienced magical girl. With Kyoko on your side, you can take a seat, relax, and watch as your worries melt away.

Who to reroll for?

How to Reroll in MagiReco

In other words, this has been a guide hopefully teaching you to roll for who you like, regardless of whether it's for their personality, or for gameplay.

Good luck to all those of ye entering reroll hell, and may your moment of leaving it come swiftly! And remember, if your rolls lack seasoning... 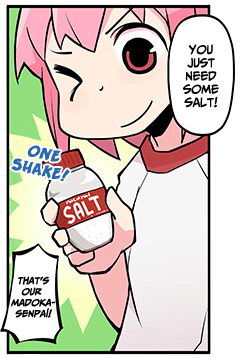