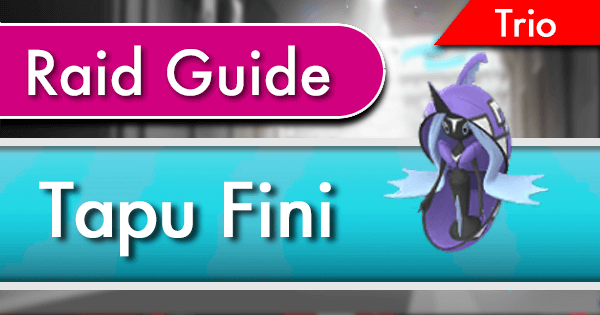 Tapu Fini is pretty bulky, and has a typing that can be pretty awkward to counter overall. Water/Fairy is very well known for PvPers in particular, but we fortunately have a few great types to draw from. While Tapy Fini doesn't have a high Attack stat, it has a number of good attacks and counter-coverage that can make it pretty annoying for an unprepared raid-team, so keep an eye on the recommended team that the game shows you at the start of the raid, and build your real team accordingly.

A duo is actually possible on this raid, but our guide will primarily focus on the more realistic trio.

These numbers are generalized estimates for this run, rounded up to the nearest multiple of 5. While it's always better to bring something higher level, this is an approximate level where the DPS of the Pokemon in question becomes high enough to successfully beat the clock with the number of players outlined in this guide under neutral weather conditions and without additional boosts. Variables such as needing to re-lobby sooner than expected can hurt the viability of these levels in practice.

Behold, one of the only really good Poison Types! Mega Gengar is the master of the short-player run, as it has huge DPS, and can also receive boosts from other Mega Gengar on the field in order to create a feedback-loop of damage. It's especially good against the Hidden Power/Moonblast set, as Hidden Power is always Fighting Type on raid bosses, which Mega Gengar triple-resists.

For larger groups, it's still great for personal damage, but it's also less useful for the team as Poison Types aren't generally the best. Still, it's great if you want to aim for the personal damage award!

For smaller groups, this is the pick for the "single Mega raid team" outlined above, as just bringing Mega Gengar and reviving it while boosting and being boosted by other players' Mega Gengar can result in obscenely high average DPS.

Mega Manectric is very fast, hitting extremely high numbers and providing a very valuable Electric Type damage boost. A lot of teams will really appreciate having Mega Manectric on the team, as most of the top DPS counters are Electric Types themselves. It also doesn't have any weaknesses in this raid so it's a pretty safe and reliable choice.

The original budget Mega Evolution can really shine here, even keeping pace with the absolutely stellar Mega Gengar due to the fact that it has a Poison Type Fast Move, and it can even provide boosts to mega Gengar's Sludge Bomb too. It also has a fairly similar level of resistance to the Hidden Power/Moonblast set, making it surprisingly bulky against these moves. Its low base Mega Evolution cost makes it a great choice for players on a Mega budget as well, with the only real drawback being the previously mentioned issue with Poison's lackluster average performance here.

In general, Mega Venusaur is the tank counter for this raid. It boosts two useful types, hits really hard, resists the majority of Tapu Fini's moveset, and has great staying power due to its high base bulk. If you can sync up Mega Venusaur with your raid group's Grass and/or Poison Types, then the damage boost is going to be significant to say the least. Just be aware of the fact that Mega Venusaur kinda' needs Frenzy Plant to excel and watch out for Ice Beam and you're golden.

Mega Ampharos may seem like the black-sheep of the Electric Type family when compared to Mega Manectirc, but it actually has a few genuine advantages over the competition. In particular, its typing gives it a resistance to Water Type moves, so it has the potential to stay on the field a lot longer and spread its valuable Mega Boost to its teammates. However, it's also weak to Ice and Fairy Type moves, so it's a good but situational choice. Still, if your Ampharos is ready for its free Mega Evolution, then it's definitely worth considering!

Shadow Electivire has huge DPS on its side, making it an outstanding Pokemon for getting ahead of the clock in this raid. It also has no weaknesses, so it's a universal pick that can be thrown in against literally any moveset without breaking a sweat. Just note that it's a bit frail, so dodging can be important.

This is basically Shadow Electivire with a tiny bit less DPS and a fair bit more bulk. Every bit as viable as the above.

Zapdos is a great Pokemon here, but its Flying typing doesn't do it many favors when compared to Raikou or Electivire. A bit less overall power, but still very good. Watch out for Ice Beam and you'll be fine. At least it resists Hidden Power Fighting!

Note that Thundershock is generally superior to Charge Beam, but if you don't want to drop an Elite TM then the latter is still perfectly fine.

Shadow Magnezone is a bit overlooked due to having a lower DPS than the other big-name Shadow Electric Types, but it's still extremely useful nonetheless! It's the only Electric Type counter on this list that resists Ice Beam and Moonblast, and its overall performance is actually very competitive with the competition. This could very well be your longest-lasting Pokemon for this raid with a bit of dodging, but watch out for Hidden Power, as it's always Fighting Type on raid bosses and Shadow Magnezone doesn't like Fighting Type moves.

Nice to finally see a "normal" Pokemon on the list! This Legendary monster sports fairly competitive DPS when compared to the other Electric Types on this list, while also sporting a very useful Water resistance, meaning it can potentially survive a very long time on select raids. Too bad it's also weak to Ice Beam and Moonblast....

This is practically the same as Mega Venusaur, but a bit weaker and a lot less bulky. It's a great overall counter for this raid, but keep an eye out for Ice Beam sets! Picking up Frenzy Plant is ideal, but Sludge Bomb is an okay alternative if you don't want to drop an Elite TM.

A bit easy to overlook as just another bulky Grass Type, Shadow Tangrowth has the power and the moves needed to put in some serious work! Its performance is very similar to Shadow Venusaur, with the one trade-off being that it doesn't resist Hidden Power Fighting. On the bright side, it also doesn't need an Elite TM to operate at peak performance!

Shadow Mewtwo can slot into so many raids, and this is one of them! Give it Thunderbolt and it really doesn't have many disadvantages to speak of, save dealing neutral damage with Psycho Cut. But if Mega Gengar can do it, then dangit; Shadow Mewtwo can too!

If you managed to score a good Zarude, then this is a great chance to utilize it. This thing is surprisingly bulky here, sporting one of the best average TDOs of anything currently available and a strong DPS to boot. This is despite weaknesses to Ice beam and Hidden Power Fighting.

Shadow Alolan Exeggutor is ridiculously bulky against Water Type moves due to its double resistance, but is also weak to Moonblast and will fold like paper against Ice Beam.

One of the classic gold-standards, Raikou is a great overall choice for this raid. Hard to go wrong with this Pokemon.

Another classic, but this one has a weakness to ice while resisting Hidden Power Fighting. Like with the Shadow variant; Thundershock is ideal, but Charge Beam is fine too for those who didn't pick one up during event hours/don't want to drop an Elite TM.

Steel is almost always a useful sub-typing, and this raid is no exception. The ability to resist Ice beam can be really useful, though the weakness to Hidden Power Fighting is a bit of an annoyance.

Shadow Luxray is basically a lesser Shadow Electivire. Its DPS is fairly close, but its TDO is substantially lower. Still, it's a solid choice overall!

Definitely a glass cannon, but Thundurus: Therian Forme is worth using on your raid team. It's weak to Ice Beam, but at least it resists Hidden Power Fighting.

Shadow Manectric has a DPS rating similar to Zekrom, but its TDO is substantially lower. Still, it's a solid choice.