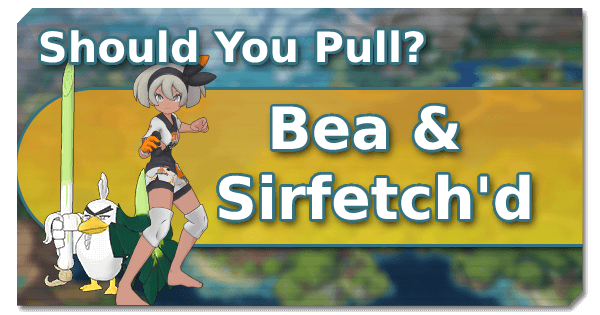 A strong and self-sufficient Striker in an under-represented type with quick setup and a great offensive presence.

-Just as frail as the other Fighting Type strikers.

Bea & Sirfetch’d hit the scene as the latest Fighting Type Striker in the game, preparing to tear up the competition with a mix of chivalry and determination the likes of which we’ve never seen! As a Fighting Type striker, Bea & Sirfetch’d have just a bit of competition within their damage-dealing niche. But what exactly makes them stand out when compared to options like Wally & Gallade or Korrina & Lucario? Well, their first advantage is their ease of offensive setup. In a manner similar to Alder & Volcarona, they are largely self-sufficient and don’t take too much time or support to hit maximum offensive potential. In fact, their Critical Rate hits +2 as soon as they hit the field, and it can even automatically max out with their grid. They can also hit the ever-important +6 attack via their X-Attack skill and grid pretty easily. They can be surprisingly sync-bar-friendly despite their lower speed and reliance on a 4-bar move, as they have at least one very reliable Move Gauge refresh method on their grid and X-Speed as a skill, though it's probably best to just use support units for these stats in order to keep a constant flow of damage. And speaking of, how do they fair damage-wise? Well, if given identical circumstances, Meteor Assault is competitive with the existing Fighting Type strikers without any true drawbacks like low accuracy, potential recoil, or defensive drops. Bea & Sirfetch’d also have a trait that’s unique to Fighting Type strikers in the game right now in the form of a very strong Sync nuke. While the competition drops Sync Move power in favor of Mega Evolution, Sirfetch’d is able to deal heavy damage with every Sync Move used.

But, sadly, Bea & Sirfetch’d do have their drawbacks, and their biggest one has to be their below-average bulk. It’s actually pretty close to their main competition, Korina & Lucario and Wally & Gallade; both of which are well known for their frailty. Their trainer move helps on this front, but they still appreciate a bit of defensive support nearly as much as their competition. They’re also fairly slow for a sync pair that is forced to rely on a 4-bar move. Yes, they can buff their own speed, but these are turns spent not attacking, so striking a balance can be tricky.

In terms of performance, in most cases Bea & Sirfetch’d are upgrades to the existing Fighting Type damage dealers in the game, sporting higher average damage and ease of use. In the Champion Stadium: Master Mode, they can come in and self-buff with ease, leaving players the option of picking Support units that focus on defensive buffs while leaving their better offensive Support units for other stages. They are also very capable of running in a dual-striker setup thanks to their self-reliance, Move Gauge refreshes, and speed buffs. On this front, they have the potential to demolish some stages before the opposing team can start building momentum.

The Battle Villa is a bit of a mixed bag for Bea & Sirfetch’d. Their passive Critical Rate boosts and grid-enabled Attack boosts mean that they really don’t need much if any offensive support, but their lackluster unbuffed speed can be an issue, as can their low bulk. The Battle Villa is a battle of attrition, and Bea & Sirfetch’d generally need to spend some skill uses to stay in the game long-term.

For Full Force Battles or the newly introduced “Battle Challenge” stages, their performance is still solid. They still have a very nice kit that makes them cut through the opposition with ease though the fact that Full Force Battles in particular tend to last a bit longer can be troubling for such a frail sync pair… assuming they ever make a return.

Finally, the Legendary Arena makes for a potential shining point at some point in the future for Bea & Sirfetch’d. With ease of setup and strong, single-target damage, they can be used to beat down the arena boss quickly while snowballing with rising Sync Move buffs. Fighting-weak Legendary Pokemon beware, Bea & Sirfetch’d are coming for you.

These are generally the most important nodes on Bea & Sirfetch’d’s grid:

Overall, we have a very solid base-kit with a few frills at ⅕, a few useful supportive nodes that patch up a few holes at ⅖, and full sync-nuke glory at ⅗.

So what Lucky Skill should go on a Sync Pair that has a high Critical rate and a sync nuke? Yeah, just stick with Critical Strike 2 and move on.

Team-wise, Bea & Sirfetch’d are pretty variable. Supports should focus on patching up whatever their grid may be missing, be it Attack, Speed, or Critical Rate. Hilbert & Samurott, Skyla & Swanna, Phoebe & Dusknoir, Lyra & Meganium, Piers & Obstagoon, Sycamore & Xerneas, Easter Burgh & Togepi, Elio & Primarina, and even Player & Torchic can all plug multiple holes while performing other functions along the way. If you manage to fill all of these issues in via their grid, then defensive buffs, tanks and healing are next on the menu. Drake & Salamence, Christmas Erika & Comfey, Jasmine & Steelix, Leaf & Eevee, and Dawn & Torterra are all stand-out in this role, and can help to keep Sirfetch’d swinging his leek for a prolonged period of time.

It’s also worth noting that Sygna Suit Blue & Blastoise can fill virtually all of these roles in a single unit.

But what about those of us who just want pure power? Well, sync pairs like Sygna Suit Leaf & Venusaur or Kukui & Lycanrock are great for melting away enemy defense, and dual-striker setups can work well with partners like Wally & Gallade or Easter May & Lopunny, but keep in mind that the support choice for this kind of team comp is very important (In other words: just use Hilbert & Samurott).

Bea & Sirfetch’d are entering a niche that currently isn’t very populated, and are doing so with a very solid overall kit. They will vy for the Fighting Type crown, and will tend to hold that crown in numerous battles. But just how valuable is this niche? Well, if you find yourself genuinely hurting for Fighting Types in the Champion Stadium in particular, then this is probably a banner worth pulling on. However, if you’re happy with Wally & Gallade or Korina & Lucario, or if you were lucky enough to pick up Easter May & Lopunny, then it may not be worth the investment.