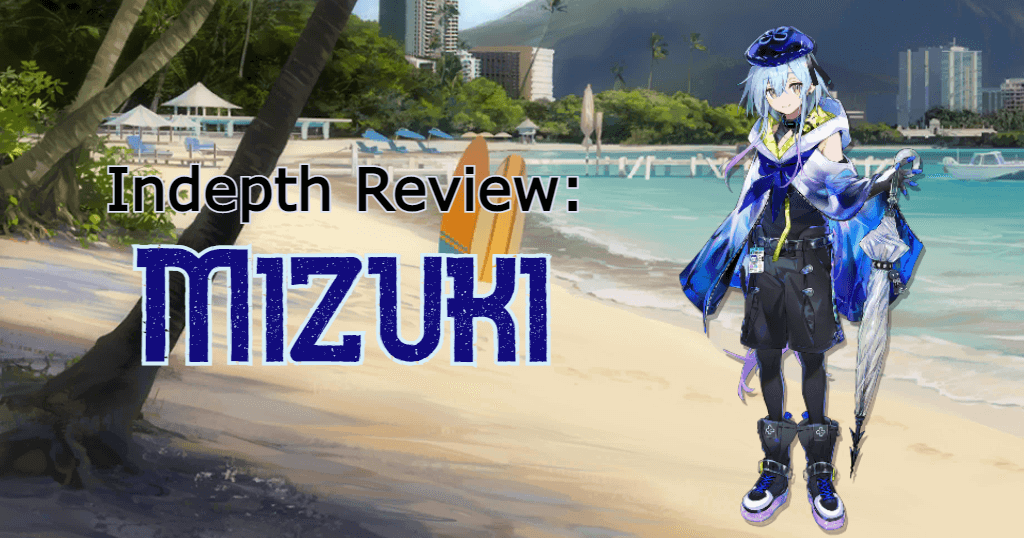 Mizuki is the future 6★ Stalker Specialist featured in the Summer Stars banner, which will run alongside the Dossoles Holiday event. Running in the same banner as Ch’en the Holungday means Mizuki has to compete with one of the best Operators in the entire game for the spotlight. Is he (yes, Mizuki is a boy!) powerful enough to accomplish this? Or will he be the spook that denies many players of a powerful limited unit? Let’s find out!

The Stalker archetype is in a strange slump currently. Before their very weird resurgence into the spotlight with the unfortunate Kirara, all the archetype had to offer were Manticore and Ethan, both incredibly solid options for their roles that have fallen into the background recently. With the release of so many more Operators that can perform crowd-control roles like the Stalkers’ without sacrificing on DPS or other support abilities, these two have increasingly become more of a niche option.

While they are by no means bad, it’s not hard to see why Hypergryph would want to “modernize” this archetype with the release of two, almost-consecutive Stalker Operators, and while Kirara fell very flat due to her completely incoherent mess of a kit, Mizuki seems to be more focused on what his role in a squad is: a balanced mix of decent crowd-control abilities with mixed Arts and Physical DPS thrown in.

If this is already ringing some alarm bells, I can understand why. Operators balanced around performing a “jack-of-some-trades” role often end up outclassed by other options focused exclusively on one of their talents, like what happens with most Pioneer Vanguards when compared against Standard Bearer or Charger Vanguards. Another possible red flag is this strange focus on mixed damage that also befell Kirara, though in Mizuki’s case it’s handled in a completely different way.

For now, let’s check how he compares stats-wise to other Operators of his archetype before we jump right into his actual skillset.

Surprisingly, Mizuki’s stat spread is not a straightforward improvement over his lower-rarity counterparts. Even factoring in his naturally higher level cap, Mizuki loses to both Kirara and Ethan in regards to HP, and to Manticore in regards to Defense. This is mostly due to their disparate Trust bonus spreads, with none of them having the same type of boost in this regard.

Still, the one thing in which Mizuki does remarkably better than the other units of his archetype is in Attack, having a significantly higher stat here than all others. Taking into account the survival-oriented traits of his archetype this is a big win for Mizuki, as it’s unlikely the defensive stats will be of much matter with his natural evasion and lower taunt level.

At E2, every single attack Mizuki performs will deal an additional hit of Arts damage equal to 50% of his Attack to the enemy with the lowest HP within range. Pay close attention here, as most of his kit interacts heavily with this Talent!

This is the unique way in which Mizuki handles mixed damage, by having his regular attacks deal Physical damage and having his Talent take care of the Arts portion of it. And to be completely fair, this is probably the most effective way of handling this!

Unlike other units with conditional mixed damage (such as Ch’en’s Chi Xiao - Shadowless), Mizuki is not directly gimped from his mixed damage as it remains active constantly and is only tacked onto his attacks, which, as we’ve discussed previously, already come off a really good Attack stat base. While the increase in both enemy Resistance and Defense still hurts Mizuki, this difference means he doesn’t suffer from it as much as other Operators do. Good job, Mizuki!

Still, don’t expect this Talent to be able to cover your Arts needs all by itself. Due to the 50% modifier and his very, very slow Attack Interval, Mizuki’s first Talent alone deals a little more than a fourth of what Lava’s normal attacks would do, without any of the AoE capabilities as it only triggers on a single enemy.

At E2, whenever there’s an enemy with 50% or less HP within Mizuki’s range his Attack is increased by 10% (+2% at P5). Given his archetypal range, it should be pretty easy for Mizuki to have large groups of enemies within his range, which should help trigger this Talent often.

Still, the boost he gets from it isn’t massive and, as is common with conditional buffs like this one, it will constantly fluctuate between being active and not, and the effects aren’t impressive enough for it to be worth constantly trying to have it active somehow. On the other hand, this also comes with the added bonus of his DPS not absolutely tanking if these conditions aren’t met, which other very recent units suffer from. It’s just a good, if not incredibly noticeable, added bonus.

Mizuki’s first skill comes very close to being a completely generic one, as it grants him charges of a more powerful attack every 7 seconds (coincidentally just double his Attack Interval), of which he can store up to three at a time to be released automatically the next time he attacks (think Eyjafjalla’s Ignition).

Attacks from this skill deal 300% the damage of a regular one, and increase the multiplier of Mizuki’s first Talent from 50% to 150%, effectively dealing three times the damage of a normal Attack, both from the Physical and the Arts aspect.

While this is a pretty decent skill for lazy, constant DPS, it really does not hold much potential and is hindered by its focus on mixed damage, as increases in Resistance can make it tank heavily when compared against any Guards’ generic skills, which already come off a higher base Attack stat and faster Attack Interval. This skill simply doesn’t hold much potential.

When activated, this skill reduces Mizuki’s Attack Interval by almost half (from 3.5 seconds to 2), increases his Attack stat by a small 30% and, most importantly, buffs his first talent so that it triggers on one additional enemy every time, also inflicting Bind for 1.3 seconds on hit.

This is the first of Mizuki’s skills to interact with his first Talent, and it does so in quite an interesting way, enabling his first crowd-control characteristics and making him similar to the 4★ Stalker Ethan. In this regard Mizuki’s crowd-control abilities are quite commendable: his overall skill uptime is a bit better than that of Ethan. Without the RNG aspect that the former Reunion member has, Mizuki is actually quite good at keeping the binds up, even if the overall time the enemies are not bound is longer in his skill (0.7 seconds per attack cycle) than in Ethan’s (0.5 seconds).

The real downfall of this skill is that, even if the Physical portion of his damage is still applied to all enemies within range, the Binding effect is only applied via the Arts hit, which drastically reduces the potential amount of Bound enemies from the “just as many as can fit in my range” that Ethan has to simply two. This seriously limits Mizuki’s actual role as a crowd-control unit, especially when compared against another crowd-control focused unit of his same rarity, such as Magallan with her first skill, High-Efficiency Freezing Module.

Many do still consider this to be his best skill, though, as the Binds are, if nothing else, very consistent. With a 21 second duration and only 15 SP of charge this skill manages to have a really good uptime of 58%, making it not only a good option for binding enemies (so long as their numbers don’t exceed the target count of his improved first Talent) but also his best option for consistent DPS.

Skill 3: Moon in the Water

When activated, this skill massively expands Mizuki’s attack range (to that of Angelina’s Arcane Staff - Anti-Gravity Mode), increases his Attack by 150% and increases the number of targets of his first Talent by two, also Stunning all enemies hit by it for a second. Additionally, if Mizuki hits less than 3 enemies on attack he will lose 12% of his max HP.

This skill is to Manticore what the previous one was to Ethan, spinning it around into a mix of decent DPS (more burst-oriented, in this game) and target-limited crowd-control. While it is definitely better than Manticore’s pretty atrocious Stun uptime in her second skill, one second of Stun for every 3.5 of his Attack Interval really isn’t enough for most occasions, and its limited nature also makes it worse at taking on larger groups of enemies. The uptime is also pretty bad in comparison, with Mizuki’s 33% being half of Manticore’s 66% and with a pretty long charging time of 60 SP.

Still, the expanded range is definitely a welcome addition and the big Attack modifier (which also impacts the Arts strikes) make of this the best skill Mizuki has for burst DPS, especially if he can constantly have those three Arts attack trigger (though the damage will plateau against larger groups of enemies).

The HP loss is also pretty minimal, though it can kill him if every single one of his attacks does not connect with three or more enemies. A simple global regen like Angelina’s or Perfumer’s should be enough to fix this, though, as he barely does over 100% of his max HP with its effect over the entire duration of his skill.

In the end, while most people do not consider this his “main” skill, it’s definitely an option worth considering if you want to raise Mizuki, and especially if you want him to scratch the DPS itch that Kirara simply cannot fulfill.

So, should I pull for Mizuki? Are we seeing a sudden resurgence of the Stalker archetype after the massive disappointment that was Kirara? Is his kit anywhere as good as his banner buddy Ch’en the Holungday? The answer is PROBABLY NOT. As previously discussed Hypergryph’s attempts to modernize this archetype really haven’t given great results, and while Mizuki is certainly nowhere near as useless as Kirara, he also isn’t worth the investment for most players. Regardless, it is an undeniable fact that his banner is one of the most powerful we’ve ever seen, so if you get spooked by him in your Alter Ch’en pulls, he may just be interesting enough to be worth your while. 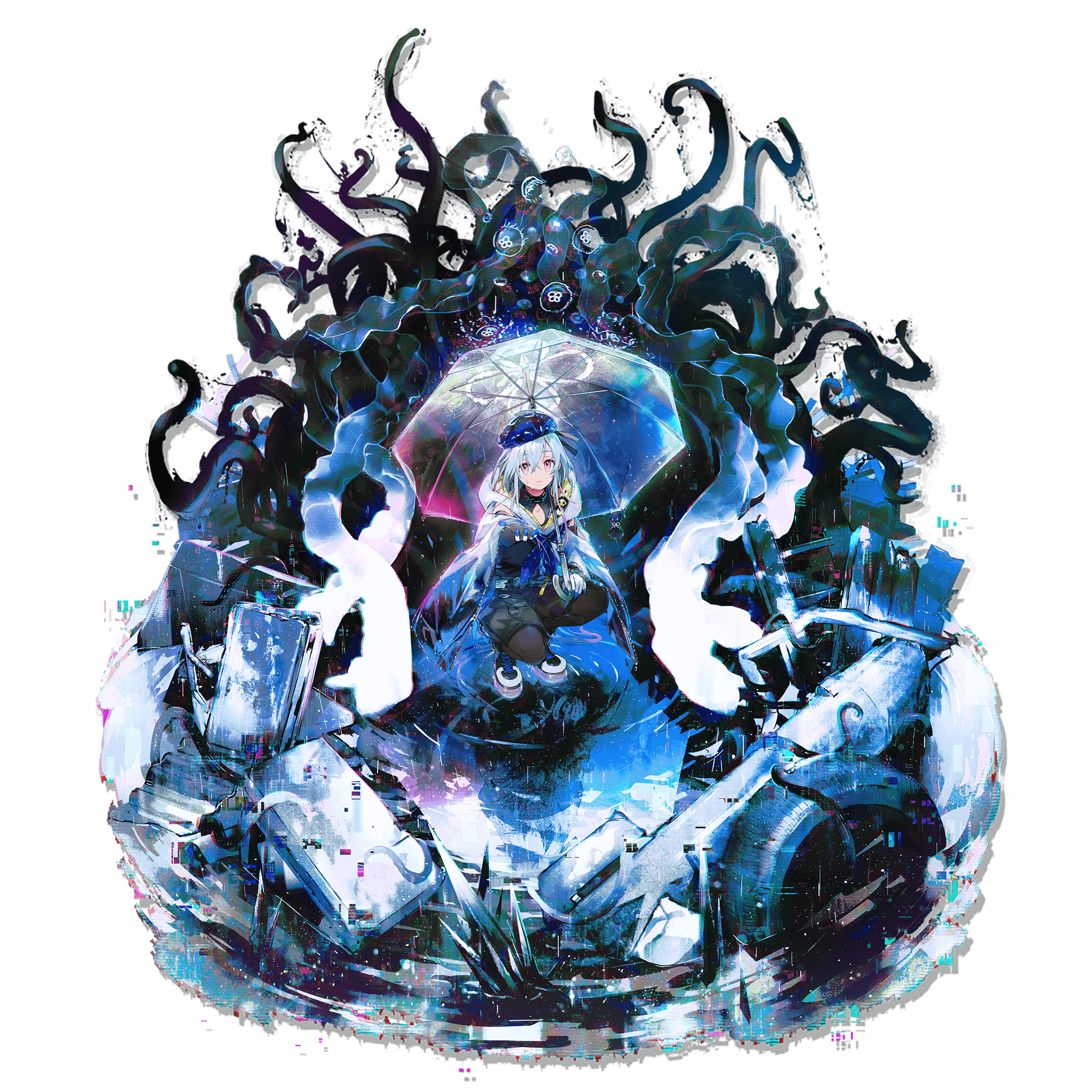