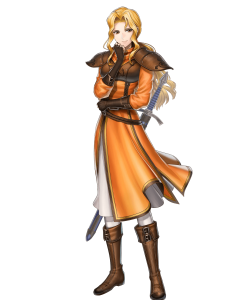 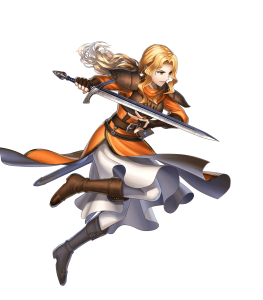 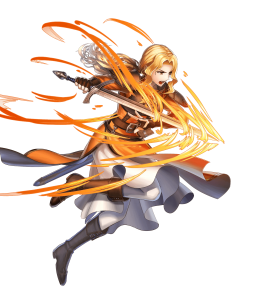 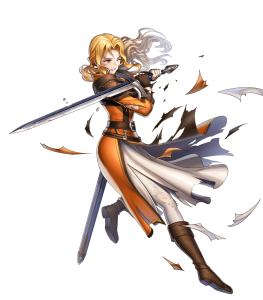 Making her long overdue appearance, Eyvel arrives to Heroes as an Infantry sword unit! Despite her amnesia, she’s more than capable of pulling her weight in battle and trying her hardest to protect Fiana and those she holds dear.

Eyvel’s standout stat is her Defense, clocking in at a fantastic 38; this is amongst the highest of any Infantry unit and provides a niche as a physically defensive unit. While this niche isn’t particularly unique, what makes Eyvel unique is her combination of high Defense and Speed, boasting a decent 35 Speed. This is generally enough to avoid follow-up attacks (especially with Speed buffs), and with access to Null Follow-Up as an Infantry unit, she can prevent enemies from guaranteeing follow-up attacks with skills such as Bold Fighter, Vengeful Fighter, and Quick Riposte. Of course, Eyvel trades fantastic 38 Defense and solid 35 Speed for middling 33 Attack and 25 Resistance. Even if Eyvel is able to take many physical hits, it won’t matter if her Attack is too low to deal meaningful damage. While this can be circumvented with Specials such as Bonfire and Ignis that scale based on her defense, if the enemy has a Guard effect, Eyvel’s damage output may be completely shut down. 25 Resistance also prevents Eyvel from consistently taking multiple magical attacks without some Resistance investment.

As Mistress of Fiana, Eyvel has to be flexible and have adaptability to keep her village afloat and keep everyone alive. Thanks to her combination of great Defense and Speed, Eyvel can utilize both Player Phase and Enemy Phase roles. She can opt to be more offensive with skills such as the Cake Cutter and Swift Sparrow to increase her mediocre Attack and decent Speed; on the flip side, she can wield a defensive weapon such as her native Guard Sword or Safeguard and utilize passive skills that increase her Enemy Phase capabilities, such as Steady Breath and Fierce Stance. While her 25 Resistance is disappointing on paper, Eyvel possesses a Resistance Superasset, meaning if Eyvel is +RES, her Resistance will increase by 4 instead of 3 (29 Resistance instead of 28). In tandem with a Resistance-refined weapon, Resistance-increasing skills (such as Fort. Def/Res 3), and Resistance buffs from allies, Eyvel can perform the role of a mixed tank or even support with Ploys and Sabotages. Thanks to Eyvel’s Defense being so high already, Eyvel doesn’t need much investment in Defense for a mixed tank build. Eyvel’s flexibility is only increased by her status as an Infantry unit. She not only has access to powerful passives such as Bonus Doubler, Null C-Disrupt, and Null Follow-Up, but also access to using Guidance and Ground Orders from flying allies to increase her mobility.

Despite Eyvel’s flexibility, she still faces lots of competition. With Heroes’ sword pool being so bloated, Eyvel has to compete with stellar units such as Legendary Roy and Byleth that can perform both offensive and defensive sets efficiently (and even do both at the same time). sword Armors such as Black Knight and Zelgius have access to powerful Armor-exclusive skills such as Bold Fighter, Vengeful Fighter, and Special Fighter that allow them to accelerate charging their Specials and guarantee follow-up attacks. They also have very similar statlines to Eyvel, with even more mediocre Armored units like Draug competing with her.

While Eyvel may struggle to keep up with her sword peers, she’s still capable of playing her part on most teams. With fantastic flexibility thanks to a solid statline and Infantry status, Eyvel will fight her hardest just like she did in Fiana. It almost feels as if Eyvel fought before she arrived at Fiana, though...she did say the reason she knows how to fight despite her amnesia could be due to a bloody past. I wonder what that could mean...

Eyvel boasts a fantastic 78 physical bulk thanks to her 41 HP and massive 38 Defense. This allows her to play physically defensive roles with ease and increases her odds of safely initiating against physical enemies.

35 Speed, 38 Defense, Infantry status, and being more than capable of redeeming her low 25 Resistance makes Eyvel a very flexible and versatile unit. She can run Player Phase sets thanks to her decent 35 Speed and 38 Defense granting her greater safety against physical enemies. Alternatively, she can utilize Enemy Phase sets thanks to 35 Speed avoiding most follow-up attacks, 38 Defense helping her take multiple physical hits, and her Resistance Superasset allowing her to play a mixed tank role with some investment. As an Infantry unit, she also has access to skills like Null Follow-Up and Null C-Disrupt to strengthen her damage and tanking capabilities.

While 33 Attack isn’t irredeemable, it’s a major setback for Eyvel since her damage output will be mediocre without buffs.

Eyvel’s 65 magical bulk is usually enough to survive one magical attack, but she’ll need investment in Resistance to become a mixed or magical tank. Eyvel is also in danger of being OHKO’d by high-Attack blue mages.

As a Sword unit without a personal weapon, Eyvel has to compete against a sea of other sword units and ends up falling short in some comparisons. Black Knight and Zelgius perform Eyvel’s roles better thanks to access to Armor-exclusive skills and Black Luna, Legendary Roy and Byleth can be Player Phase and Enemy Phase units simultaneously, hyper-offensive units such as Karla and Ayra out-perform Eyvel on Player Phase, the list goes on.