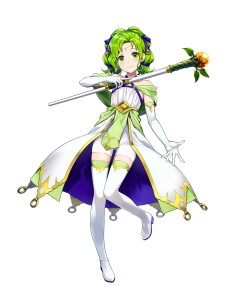 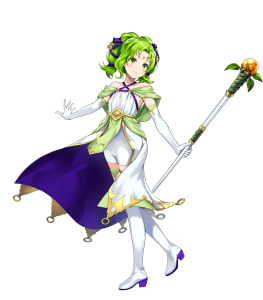 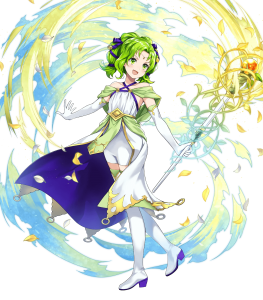 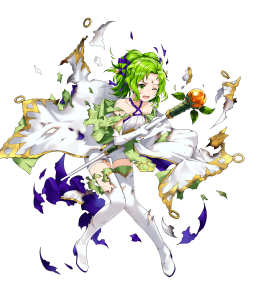 Fear not, summoners, for your heroine of justice has arrived! L’Arachel’s 37/38 offenses are some of the highest of any Staff unit, granting her impressive damage output and follow-up consistency.

On initiation, 37/38 offenses suddenly become 43/44 offenses, allowing our young justice-seeker to frequently beat her enemies senseless (especially in combination with the -6 Resistance debuff). L’Arachel’s Flash effect allows her and her allies to safely initiate on the closest enemies within 5 spaces (unless they have Null C-Disrupt), which can easily overwhelm the enemy.

True seekers of justice take every opportunity they can to contribute to the light of the world, so even Young L’Arachel gracefully mounts a pony. Because of this, she can mercilessly oppress bad guys with her 5 range and receive buffs from skills such as Hone Cavalry and Goad Cavalry to further bolster her offensive potency.

Performs well in the current meta

With space oppression arguably being the most vital compositional aspect of Defense Keeps, L’Arachel’s 3 movement and 2 range help her cover a significant portion of the 48 spaces on Heroes’ maps. If L’Arachel has Cavalry allies by her side, they may be able to force turn 1 initiations if the Offense player has too many structures in their bottom row.

Staff of Rausten’s ability to inflict a Flash effect on the nearest enemy within 5 spaces can be a massive headache, as a common strategy in Aether Raids Offense is to have a “superunit” with high stats, powerful effects (such as Null Follow-Up and damage reduction), and healing through Specials such as Noontime and Sol, skills such as Mystic Boost, and weapons such as Amity Blooms. Being unable to counterattack results in many of these combative assets becoming much less useful:

Staff of Rausten can also discourage players from baiting on certain spaces, such as the defense tiles on the Lost Castle terrain.

Our Seeker of Justice is so concerned with beating villains up that she unfortunately did not consider the possibility of she herself being beat up. 36 HP, 16 Defense, and 30 Resistance sum to an atrocious 51 physical bulk and a shaky 65 magical bulk; while L’Arachel can prevent all counterattacks with Dazzling Staff, her low overall bulk does not bode well should she find herself needing to Enemy Phase. Units with Null C-Disrupt can nullify Dazzling Staff’s counterattack prevention as well, which can quickly close the curtains on our Troubadour’s show.

Particularly weak to Far Save (if using Staff of Rausten)

Since L’Arachel’s Staff of Rausten only inflicts a Flash effect to the nearest enemies within 5 spaces, players can soak this with another unit that is closer to L’Arachel than the unit with Far Save. If this occurs, the unit with Far Save will still be able to counterattack, which can cause major problems for Defense Keeps that are particularly reliant on 2-range units to output damage.

While Staff of Rausten could simply be swapped for Flash to prevent this issue, L’Arachel becomes practically the same as her Cavalry Staff peers, just with marginally better offenses.