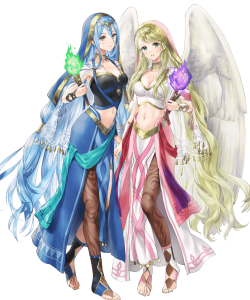 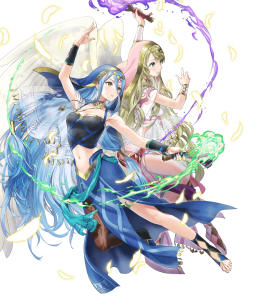 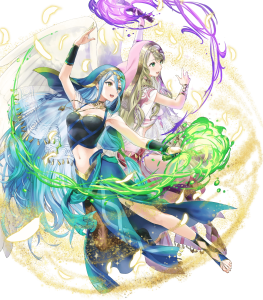 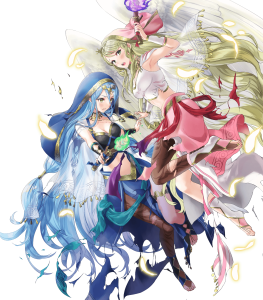 Passive B: Wings of Mercy / Flexible

37/39 offenses are surprisingly potent for a Cavalry refresher, allowing for solid damage and follow-up consistency.

Azura and Leanne wield what is effectively a powercreep Prayer Wheel, granting +6 to all stats to adjacent allies after refreshing an ally. Comparing Dancing Flames to Prayer Wheel, the latter requires the target to already have +6 to a stat, in addition to only granting +6 to all stats to the target ally. Being able to grant visible buffs to multiple allies while refreshing an ally and not needing a C Slot or Sacred Seal that grants visible buffs is…incredibly powerful.

The icing on the cake is its selfish effect, granting +6 Atk/Spd during combat if the Hatari Duet’s HP is ≥ 25% at the start of combat. If Azura and Leanne find themselves needing to fight, their damage output can be deceptively high.

Original to Legendary Azura, Gray Waves is a refresh that grants +1 Movement to Infantry and Flier allies. Being able to extend an Infantry or Flier ally’s reach greatly increases the team’s flexibility, broadening combat and mobility options. +1 Movement is particularly valuable for Flier allies with【Canto】effects, as these effects take Movement buffs into account.

The supportive fun doesn’t quite stop at Gray Waves, however. The Hatari Duet is a Harmonic Hero, so in addition to activating the Duo’s Hindrance and Indulgence structures in Aether Raids Defense and Offense respectively and scoring higher in Resonance Battles, they have a Harmonic Skill that can be activated once per battle that:

Currently, the only other 3 Movement refresher in the game is Masquerade Sigurd, making Azura and Leanne uniquely capable on their Cavalry status alone. Access to Cavalry-exclusive Skills such as Hone Cavalry for support, Atk/Spd Catch for combat, and their native S/R Far Trace for a combination of both only furthers their strength.