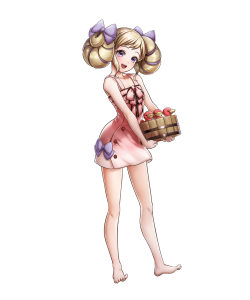 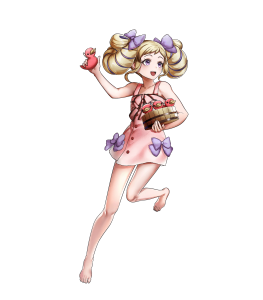 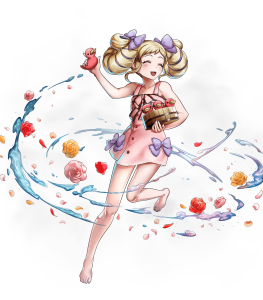 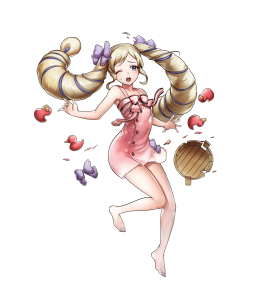 This set aims to capitalize on Hostile Springs Elise’s offensive capabilities and make her a potent attacker.

For IVs, an Asset in either of the offensive stats with a Flaw in any of the defensive stats will be absolutely fine. Speed is preferable with Red-Hot Ducks in order to capitalize on the weapon’s effect. Speaking of, Red-Hot Ducks is Hostile Springs Elise’s default weapon and works perfectly well, boosting her damage by 70% of how much she is over the opponent’s Speed stat for up to seven extra damage per attack. Barb Shuriken is another strong option, reducing the cooldown of her Special and potentially allowing for the use of higher cooldown Specials. Lethal Carrot is also strong, making all offensive Specials deal more damage. In all cases, refining for Speed will help with Hostile Springs Elise’s follow-up capabilities.

For the Assist, Reposition is a great choice for cavalry, in general, to help with mobility, but one might want to run her default Rally Up Atk+ instead. Moonbow and Glimmer are both great Special choices thanks to their low cooldown and synergy with Heavy Blade. Luna makes for a great option as well when used with Barb Shuriken and Heavy Blade.

Atk/Spd Solo makes for a fantastic A slot choice, granting Hostile Springs Elise with a huge offensive boost whenever she has no adjacent allies. Considering she’ll likely be charging ahead to attack, she can make great use of this skill with relative ease. If that’s not available, there’s nothing wrong with using her default Swift Sparrow which is her second best A slot choice for this set. Desperation makes for the ideal B slot choice, allowing Hostile Springs Elise to make any follow-up attack immediately after her first whenever she’s below 75% HP.

The C slot is largely variable. A Wave skill such as Even Spd Waves makes for a great choice as it allows Hostile Springs Elise to support herself through buffs every other turn. However, this is far from needed and is unnecessary if she’s alongside units that can support her. On a cavalry team, a cavalry buff such as Hone Cavalry will be a natural fit. Outside of a cavalry team, feel free to experiment. Hone, Fortify, Spur, and Drive skills are all safe choices that are universally good on almost anyone. Heavy Blade makes for a great Sacred Seal choice, granting Elise with an extra Special charge per attack when she has more Attack than the opponent. This goes great with Moonbow and Glimmer or with Luna and Barb Shuriken. Phantom Speed is another strong choice, ensuring that Hostile Springs Elise benefits from Red-Hot Ducks much more easily. Outside of this, a simple stat booster such as Atk/Spd or Speed +3 works great.

This set is support-oriented, allowing Hostile Springs Elise to perform well in a more supportive role.

For the IVs, Speed is her best Asset for this set to help ensure the activation of Sweep skills. Any defensive skill of one’s own choice will make for an acceptable Flaw. For the weapon, Smoke Dagger is an amazing supportive weapon, granting a debuff of six to all stats for Hostile Springs Elise’s target and any other opponent within two spaces. Her default Red-Hot Ducks can also be used for some extra offensive power. In either case, refining for Speed helps to ensure that Sweep skills will activate. Reposition is a fine Assist choice that works well on cavaliers, though her default Rally Up Atk+ also works fine. For the Special, sticking with Moonbow is recommended due to the low cooldown.

In the A slot, there’s little reason to replace Swift Sparrow since it’ll provide a good boost to both Attack and Speed when initiating combat, thus simultaneously increasing her damage output and her ability to utilize Sweep skills. Atk/Spd Solo is stronger than Swift Sparrow in general, but the high cost of this skill while Swift Sparrow requires no inheritance makes it much less worthwhile on this set than on a full offensive set, so sticking to Swift Sparrow is recommended. The B slot is a toss-up between Windsweep and Watersweep. Both function identically in that both block counterattacks from certain weapon types when outspeeding the opponent at the cost of not performing any follow-up attacks. The difference is that Windsweep blocks counterattackss from physical weapons while Watersweep blocks counterattacks from magical weapons. Which one is chosen will be a matter of personal preference and what one sees more value in blocking counterattacks from. If neither are available, her default Atk Feint can allow her to provide Attack debuffs while supporting her allies with her Assist.

In the C slot, Hostile Springs Elise will want to use a cavalry buff such as Hone Cavalry if she is alongside other cavaliers. If not, this slot is largely open to personal preference with Hone, Fortify, Spur, and Drive skills all being safe choices. The Sacred Seal slot can be used to give one last supportive boost through one of the Drive skills such as Drive Atk or could be used with Phantom Speed instead to make activating Sweep skills much easier. If Hostile Springs Elise is using Red-Hot Ducks instead of Smoke Dagger, one could cover for the loss of an offensive debuff on her weapon by using both Atk Smoke and Spd Smoke in the C slot and Sacred Seal slot, thus allowing her to debuff all stats at once without having to inherit a new weapon onto her.

Despite spending her recent time relaxing in the springs, Elise is no less prepared for battle than she typically is. This time around, Elise joins as a red dagger cavalry unit who’s strong on the attack but weak on the defense.

Hostile Spring Elise’s main selling point is her high offensive capabilities. Possessing good Attack and very high Speed, Hostile Springs Elise does not struggle when it comes to dealing lots of damage. Being a cavalier, she naturally comes with the typical benefits that cavalry units have as well.

Unfortunately, this is where the sunshine and rainbows stop for Hostile Springs Elise. Her defensive capabilities are very poor, suffering from poor defensive stats across the board. Being a red dagger also doesn’t do her any favors. Her inability to ignore the weapon triangle detracts from her overall desirability when compared to the colorless dagger units who can typically disregard the weapon triangle entirely.

Overall though, Hostile Springs Elise is a strong offensive unit who will perform very well when given the right support. She can even be a support unit herself if desired. Build her well and she’ll give her all on the battlefield.

With 33 Attack and 37 Speed, Hostile Springs Elise comes with a very impressive offensive spread. Most notably, her Speed allows her to easily secure follow-up attacks against a large number of units and synergizes perfectly with her default weapon. Her Attack stat of 33 isn’t the highest around, but it’s still enough to deal great damage, especially considering her high follow-up potential.

Being a cavalry unit comes with its own share of advantages. With a movement range of three on top of being a ranged unit, Hostile Springs Elise has amazing reach, allowing her to more easily approach and attack distant foes. She can also easily benefit from cavalry buffs such as Hone Cavalry in order to obtain a huge offensive boost.

Elise has never been a character known for defensive capabilities, this version being no exception. With 34 HP, 18 Defense, and 22 Resistance, none of her defensive stats even approach average. While she can potentially survive an attack from a green unit thanks to Weapon Triangle advantage, she’ll be an easy target for any other color and even green units will be able to get through her if given extra attacking opportunities.

Being a red dagger can look good on paper, but is more of a hindrance overall. One of the main appealing factors for colorless dagger units is their ability to avoid the weapon triangle completely outside of Raven tomes. Hostile Springs Elise lacks this and her red color really just makes her function like a red mage that targets Defense. As such, one might find more appeal in one of the colorless dagger units rather than Hostile Springs Elise.

Being a cavalry unit also comes with its share of disadvantages. Cavaliers are hindered by terrain more than any other movement type, being completely incapable of passing through forests and being slowed down majorly by trenches. Additionally, any unit possessing a cavalry effective weapon will have no problem defeating Hostile Springs Elise. While this won’t be of concern to everyone, the lower BST of cavaliers on top of the already lower BST that comes from being a ranged unit makes Hostile Springs Elise a terrible choice for those who wish to maximize Arena score.