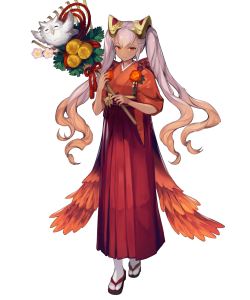 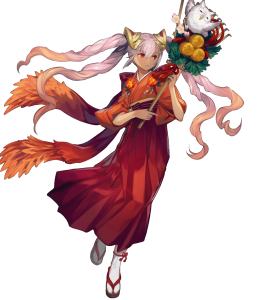 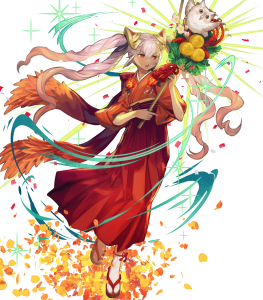 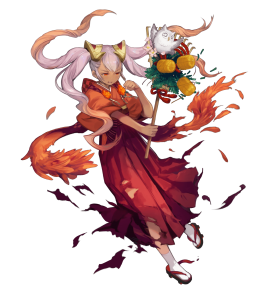 This is a typical offensive support build for healers that takes advantage of their ability to simultaneously utilize Dazzling and Wrathful Staff to both keep them safe while attacking as well as increase their damage output. As a cavalry healer, Laevatein excels with this set due to her superior mobility.

Laevatein has a variety of weapons she can choose from: Pain will allow her to devastate enemy teams with heavy chip damage, particularly if she combines it with Savage Blow as both her C skill and Sacred Seal. Alternatively, Gravity provides a powerful mobility debuff that synergizes well with the high mobility of cavalry units to emphasize their advantage. Finally, Laevatein’s base weapon, Kumade, works just fine on a budget. Recover is generally a bit better for Laevatein due to her high Attack stat, but her base Rehabilitate will also work just fine as well.

Atk/Spd Solo is easily Laevatein’s best choice of A skill, due to providing a strong amount of offensive stats with a very easy to meet condition; as a cavalry unit, Laevatein can easily maneuver to avoid being adjacent to her allies when attacking. Alternatively, Atk/Spd Bond can also work although its condition is a bit harder to meet for a ranged cavalry unit. However, it can stack beautifully with the Atk/Spd Bond Sacred Seal, giving Laevatein a massive +10 boost to her Attack and Speed when attacking. Finally, on a budget Laevatein can settle for just Speed +3.

This build focuses entirely on Laevatein’s support characteristics as a healer. As a full support build, the chosen IVs don’t matter; however, +ATK is generally ideal due to simultaneously increasing Laevatein’s damage and healing output.

The choice of weapon is entirely up to player preference; Flash applies an incredibly potent debuff that can heavily swing combat into Laevatein’s team’s favor. Alternatively, her base Kumade applies a strong and consistent debuff, though targeting the enemy with the highest Defense means that it is very difficult to control who it targets. Any other weapon can also work based on preference; regardless of choice, it’s important to take the Dazzling Staff refine to ensure that Laevatein can safely attack to apply any debuffs.

Wings of Mercy is an exceptionally potent support skill for healers as it allows them to immediately move next to any ally that needs healing and improves upon Laevatein’s already strong mobility. Alternative options include her base Wrathful Staff to allow for more damage output, or either Chill Def or Chill Res to stack with her base Kumade for even more debuffing capability.

As a cavalry unit, Laevatein enjoys superior mobility compared to the majority of the other healers. She also has access to powerful cavalry buffs, which work well with her relatively strong offenses. With weapon refinery, Laevatein can run the powerful Dazzling/Wrathful Staff combination that effectively turns her into a ranged and magical Firesweep users, except that she can still counterattack when attacked.

While healers have very poor skill availability, particularly in terms of lacking offensive Specials, they no longer lack a powerful A skill as they can utilize Atk/Spd Solo. As a cavalry unit, Laevatein additionally needs to contend with having a weakness to anti-cavalry weaponry as well as having her strong mobility hampered by obstructions, forests, and trenches.

Ultimately, as a cavalry healer, Laevatein will excel due to her strong mobility as well as access to the potent Dazzling/Wrathful Staff combo.

As a healer, Laevatein can utilize the potent Dazzling/Wrathful Staff combo to simultaneously deal strong magic damage (while preventing counterattacks) as well as apply strong debuffs.

As a cavalry unit, Laevatein has superior mobility as well as access to strong cavalry buffs.

With 36/30 Attack/Speed, Laevatein can deal significant amounts of damage, particularly with access to the Dazzling/Wrathful Staff combo and cavalry buffs.

As a cavalry unit, Laevatein will be easily taken out by anti-cavalry weapons like Ridersbane.

As a seasonal unit, Laevatein will be difficult to merge and obtain optimal IVs for.