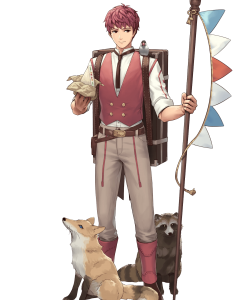 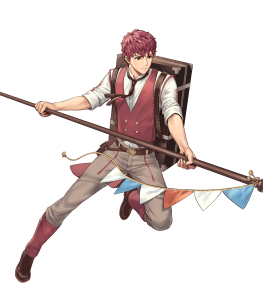 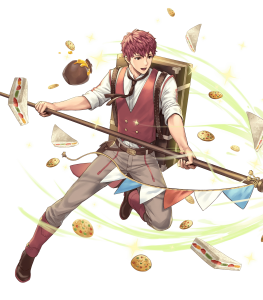 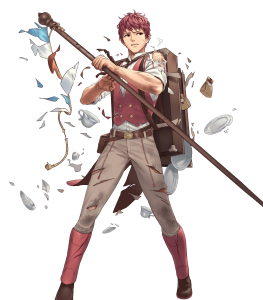 Picnic Lukas makes his appearance as a powerhouse physical fighter with strengths similar to his base iteration. Don't be confused: while Lukas: Sharp Soldier is an infantry hero, Picnic Lukas is an armored hero, granting him access to a range of powerful complementary skills.

Lukas’ greatest strengths should be immediately apparent: 37 base Attack and 42 base Defense offers an incredible foundation that allows Lukas to combat physical heroes with ease. Furthermore, his armor classification gives him access to skills to negate the disadvantages of his low Speed. Bold Fighter and Vengeful Fighter can improve Lukas’ offensive capability whereas Wary Fighter offers additional bulk.

This leaves Lukas with two remaining weaknesses: a poor single tile movement range and a weak base Resistance. While Armor March or Armored Boots can remedy Lukas’ movement issue, his poor Resistance will leave him quite vulnerable to mages and dragons. Lukas should stick to his strengths and focus on dealing with physical attackers, as he stands as one of the best heroes in the game in this role.

“What I wouldn't give for just one full day curled up with a good book.”

Lukas wields phenomenal base Attack and Defense, allowing him to duel physical attackers with great success. These stats also grant Lukas powerful Special damage. Bonfire and Ignis are fantastic choices on Lukas, as either skill will deal immense bonus damage that can assist in punching through bulky opponents.

As an armored hero, Lukas can wield any of the powerful Fighter skills exclusive to this class. Bold Fighter and Vengeful Fighter are the best offensive options, whereas Wary Fighter can be a great defensive tool. Special Fighter is also available, but given Lukas’ poor base Speed, he will struggle to take full advantage of this skill.

Though Lukas is an absurdly strong physical bulwark, his Resistance is less than stellar. Base 22 Resistance leaves the Deliverance soldier vulnerable to mages and dragons alike, both of whom can exploit his low Resistance as well as his low Speed.

Though being an armored hero brings a range of advantages, the class is not without its disadvantages also. Lukas suffers from very poor movement, limiting his effectiveness as a Player Phase attacker. While this issue can be remedied somewhat through Armor March and Armored Boots, these solutions are not perfect. Armor March is dependent on adjacent armored allies, whereas Armored Boots requires a dedicated healer.

Picnic Lukas is a heavily underrated melee counter. Nearly every melee unit in the game that isn't a green dragon will be stomped by his utterly insane bulk. This build maximizes his potential as a Near Save unit.

This man will delete most physical damage characters without breaking a sweat. Slaying lance with special fighter means Bonfire is almost always on to retaliate with big damage.

Well how I should say ... Where we have the Tankiest unit if 71 Def during Enemy Phase soo.... he is still Frail in RES so Don't put him under Enemy Mages/Dragons Because there's isnt a way to make them to target Defense soo yeah... if it is 5*10 Max Dragonflies and Ally Supported you get 80 Def soo "Big Invest Big Rewards" if you have a Armor Team if Supports for Defense and Rally he can Reach 96 and on Is season it can reach 99 if only Rally Defense +