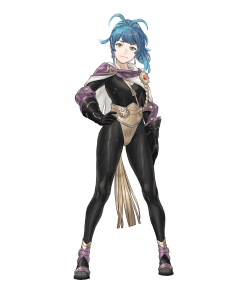 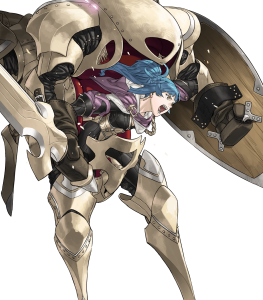 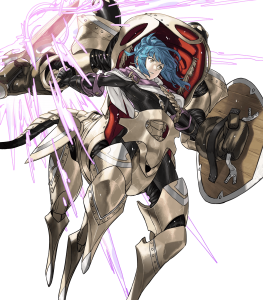 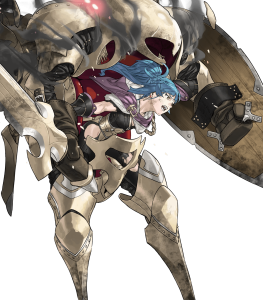 Passive B: Hit and Run / Wings of Mercy / Lunge

Reginn is the first to start off a new generation of Mythic heroes with an additional effect: adding an extra team slot to your Aether Raids Offense teams. It simply can't be overstated how much an extra team slot turns the tables; not only can you reap the usual Astra Mythic benefits as well as have Reginn participate often in actual combat, but adding her takes absolutely no opportunity cost (at this time of writing, anyway) as adding her opens up a free sixth slot anyway. Essentially, there's literally no point not running her.

Reginn's base sword weapon is a wonderful bundle of useful familiar and new mechanics. An extra helping of Atk/Spd +6 as well as 30% damage reduction when initiating combat is standard 4th-5th generation faire and makes Reginn a reliable player phrase threat.

Above all else, however, Lyngheiðr's Canto effect is what makes up the magic of using Reginn. Whereas most other offensive units have a difficult time getting into favorable positions while having some sort of escape route (i.e. activated Galeforce or a refresher unit nearby), having Canto allows significant ease of escapability as well as hit and run tactics. To put it in simple terms: run, stab, run back. Notably, Canto also works with Galeforce and when destroying structures in Aether Raids, which adds an important layer of support utility as an actively participating Offense mythic.

Reginn's unique skills wouldn't make her half the threat she is without a great statline, and a great statline she does have. To start off, she bolts in the game with an amazing base 40 Speed which only improves significantly with a super Asset. With other Speed augmenting skills and little to no support, Reginn can trump even the most notable Speed tanks in the game. Furthermore, her damage output is consistently clean coming off of a nice base 36 Attack, and her tankability, while nothing special at base, is balanced throughout all defensive stats and plays well in practice thanks to Lyngheiðr's damage reduction effect.

Thanks and no thanks to her cavalry status, Reginn could stand to have a few more inheritance options aside from her blessed access to the Lull skill line. Skills like Time's Pulse, Null Follow-Up, and especially Flashing Blade (whereas Reginn has to rely on her only decent Attack instead of fantastic Speed for Heavy Blade activation) are very sorely missed out. Furthermore, though she basks nicely in her three space movement, some Defense keeps may exploit her inability to traverse mountains, trees, and especially trenches.

The Canto effect of Lyngheiðr is unfortunately only active on Turns 1 through 4. While this won't discourage any player who knows what they're doing, the limit being in place simply means Reginn is on a crunch to make full use of it as possible. The limit may also prove inconvenient to players attempting to finish off an Aether Raids Offense match past Turn 4 and forgetting Canto is shut off.

Reginn doesn't go down easy thanks to Lyngheiðr's damage reduction and her decent defenses, though she has a negligible presence in the enemy phase department, and her lower base HP doesn't leave much room for punishment especially considering she cannot benefit from her own Mythic stat blessings herself.