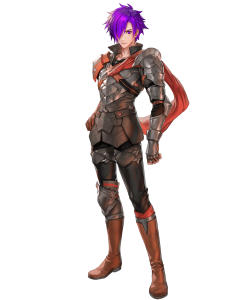 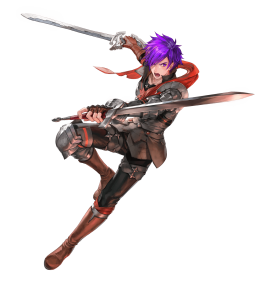 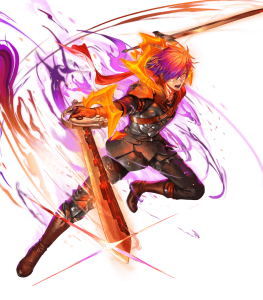 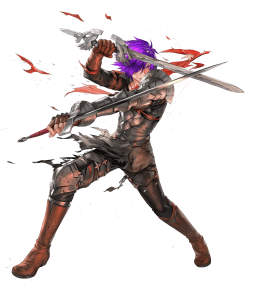 I Love Hitting Twice in the Player Phase (Galeforce)

Why Am I Tanking? I Have Defensive Penalties in My Weapon! (Melee Specialist)

Take what you knew about Brave-Esque weaponry and turn the dial up to 11 because Shez’s Crimson Blades is arguably one of the best Swords we’ve gotten to date. To summarize its effects, it essentially grants the following:

This may not seem like much in the grand scheme of things as the weapon description doesn’t take up the entire screen like Nailah’s weapon does, but it’s the effects that he does have that make him as amazing as he is. For starters, and arguably the most important effect, the Dual Phase Brave he has innately, allowing him to strike twice in both phases consecutively, grants him an absurd amount of passive and role flexibility, akin to other types of Dual Phase Brave users. However, most units of that kind cannot stack Spd, which gives Shez a desirable edge over his contemporaries. Beyond that, he also has a Breath effect that can allow him to easily charge Specials and output significant amounts of damage, as well as 40% Damage Reduction which can be used for setting up Vantage or general tanking, especially when paired with a Damage Reduction B Passive. When combining all of these effects into one weapon, Shez ends up performing at the top of his class, and given that there are barely any notable counters to Dual Phase Brave weaponry at this time, especially for those who can stack Spd, I find it difficult to see Shez aging terribly over the course of FEH unless they were to simply roll out an effect that negates Dual Phase Brave entirely. But IS won’t do that… right?

As with most modern-day units, it’s hard to mess up a stat allocation as there are way too many stats to distribute, and thankfully, Shez was treated quite well in that regard. Despite his weapon only having 11 MT, Shez boasts a monstrous base Atk stat of 43 and an extremely high base Spd stat of 41, both of which have superboons to boot, meaning that any fear of him dealing damage should be cast aside as he boasts one of the highest Atk stats for any Dual Phase Brave unit.

Infantry being Infantry, they have a lot of passive options at their disposal, and Shez, in particular, can afford to run many more B Passives without a notable opportunity cost as his PRF allows him to double in both phases no matter what while also granting Damage Reduction if he meets the condition. As such, he doesn’t have to give up his B Passive for the likes of Null Follow-Up or Spd-based Damage Reduction skills and can instead run passives such as Bulwark, Tempo, and Null C-Disrupt. However, it is worth mentioning that he can still run Damage Reduction skills, including the recently released Velocity, which combines Tempo with Spd-based Damage Reduction, as well as Null Follow-Up if you feel that it’s important to shut down any form of guaranteed follow-up. That being said, you more than likely get more mileage out of the former than the latter.

Because Crimsons Blades’ Breath effect and Damage Reduction apply in both phases, Shez can take on several types of combative roles to the point where his flexibility is much grander than most units in the current state of the game. Whether he sticks with a Vantage niche, take on a Galeforce role, or act as a Melee Specialist, there are very few roles Shez cannot take on.

Because two of the notable effects that come from Crimson Blades are tied behind having a certain amount of HP present at the start of combat, Breath and Damage Reduction respectively, Shez will have to watch out for units that can either apply out-of-combat damage, whether that’s from the likes of area-of-effect Specials or after-combat skills such as Poison Strike, Pain+, etc., or units that can land a hit on him during combat whether that’s due to him missing a kill while in Vantage range or if going up against a unit with Hardy Bearing and/or a guaranteed follow-up without any sort of Null Follow-Up effect present. However, given how offensively loaded Shez is, it may not occur too often but threats such as Medeus, Seiros, or anyone with notable types of Damage Reduction could potentially soak his damage and knock him out of the effects’ conditions’ ranges, or take him out entirely if he isn’t careful.

With all of Shez’s flexibility comes an overabundance of role overlap from other types of units that can replicate similar niches. In terms of Vantage, units with Dual Phase Brave effects such as Winter Altina, Keaton, and other units of similar strength can mimic quite a fair amount of his performance, generally being extremely hard-hitting and more likely to tear down foes, especially when taking Twin Blades into account. Even with that being the case, Shez is simply a step above in that regard. Meanwhile, Vantage units that heavily prioritize their survivability, mainly Brave Marth and Ascended Mareeta, while lacking in significant damage output comparatively to Shez and other Dual Phase Brave units, will have a much easier time taking hits when needed as the former can have Vantage at any health percentage, the latter being able to consistently loop Damage Reduction Specials, and both having Null Follow-Up innately meaning they’ll only be taking one hit in most cases. Beyond that, if you were to take Shez into a Galeforce role, he would still have to compete with other, more easily accessible, Sword Infantry including, but not limited to, Rutger and Soleil, the former being able to easily charge a Galeforce thanks to their innate Slaying and Dual Phase Spd-based Breath effect, and the latter having a much better safety net due to the Firesweep effect as well as the accelerated cooldown they gain per their own attack. However, despite not necessarily bringing much new to the table, what he does bring allows him to stand above most of his contemporaries, thus making him one of the more desirable units in the game.