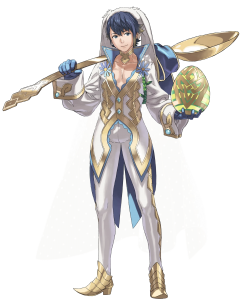 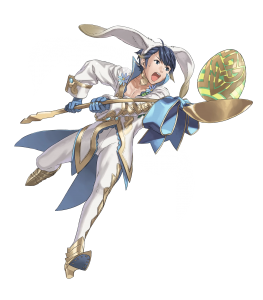 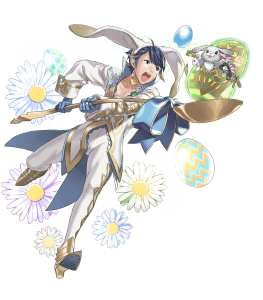 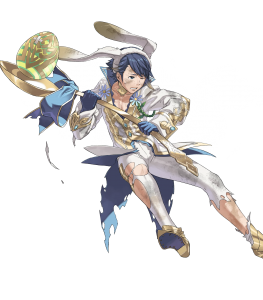 While he can take a boon in Defense in order to become more physically tanky, Spring Alfonse prefers to increase his excellent Attack or Speed. Since Resistance is his obvious dump stat, it can be safely reduced with a bane.

A +SPD or +ATK IV is naturally preferred in order to achieve this goal, with a slight preference towards +SPD. -RES is Spring Alfonse’s safest bane.

Slaying Axe with a +Speed refinement further adds to Spring Alfonse’s follow-up potential while granting him the stellar effect of consistent cooldown reduction. His native Giant Spoon is a serviceable alternative that further adds to his burst damage, although his Specials will unfortunately will require an additional charge to fire off. Because of both these factors, low cooldown Specials like Glimmer and Moonbow were chosen -- which one is selected for play will depend on the type of foes Spring Alfonse will be facing.

Assists, as per usual, can vary. Movement assists like Pivot or Swap can extend Spring Alfonse’s already considerable range of retreat, though team support like Reciprocal Aid or a dual Rally can easily be used as well.

With a +SPD IV, a +Speed refinement, the Speed +3 seal, and Atk/Spd Solo, Spring Alfonse reaches an incredible 55/48 offensive spread without buffs. This comes at the cost of compromising his position, as it requires Spring Alfonse to position himself away from his allies. Provided his opponent does not have a Special charged or does not have a Brave weapon, it is exceedingly likely that Spring Alfonse will survive a combat engagement to fight another day thanks to his decent physical bulk, which can be further enhanced by Fury.

Chill Spd is Spring Alfonse’s ideal B skill, as it allows him to heavily debuff speedy foes he would otherwise struggle to perform follow-ups on, while Chill Def can be used to break through tanky green walls. Because of its low availability, Desperation is an excellent alternative that synergizes well with Atk/Spd Solo and Fury, allowing Spring Alfonse to perform consecutive attacks once he hits the >75% HP threshold.

C skills are dependent on player preference. If Spring Alfonse is being run on a cavalry team, cavalry buffs would provide valuable team support. Alternatively, self-buffing skills like Even and Odd Spd Wave are solid choices.

Giant Spoon is an interesting gimmick. Its refinability allows Spring Alfonse to gain a few extra points in a stat of his choosing and its +10 bonus damage (Wo Dao effect) upon his Special triggering allows low cooldown Specials to hit much harder. What stat you refine for is dependent on what IV you’re running -- +SPD prefers a +Spd refinement to hit the over 40 Speed threshold if used in conjunction with Fury. +ATK  along with a +Atk refinement and Fury brings Spring Alfonse’s Attack to a massive 57. +DEF with a +Def refinement and Fury turns Spring Alfonse into a physical tank with 40 total Defense and passable Speed. This prevents follow-ups from being performed on him, which is a feature most tanks can’t claim to have.

Glimmer is an excellent Special that scales off of Spring Alfonse’s great Attack, while Moonbow performs a similar function through reducing the enemy’s Defense. Bonfire can be used if running a +DEF IV or refinement to deal massive damage. Noontime is less offensively effective due to offering no damage bonus of its own, but can allow Spring Alfonse to become a sustain tank when used with the Giant Spoon’s effect. It also has good synergy with Fury and Quick Riposte.

Fury offers a further all-around stat increase in exchange for some post-combat damage . Quick Riposte guarantees follow-ups when Spring Alfonse baits, and along with Quickened Pulse, allows him to hit back the enemy with a Special once they attack him only once.

C-slot skills are once again variable. Threaten Spd allows Spring Alfonse to effectively boost his offensive and defensive prowess by adding to his ability to perform or deny follow-ups, while Threaten Def allows him to hit the enemy harder. Cavalry buffs or Spurs are always useful support for cavalry teams, though any buff, Spur, or Tactic can be used here.

Although this build functions best when under the effect of cavalry buffs, when given the requisite boost, Spring Alfonse can run quite an effective quad Brave build.

Once again, Atk/Spd Solo or Life and Death increases Spring Alfonse’s already impressive Speed and Attack considerably. This negates the -5 Speed penalty the Brave Axe inflicts in exchange for free doubles, and also boosts Spring Alfonse’s Attack, which is hurt a bit by the low MT  of the Brave Axe. Life and Death, however, reduce his Defense and Resistance by 5, while Atk/Spd Solo requires careful planning and positioning. Swift Sparrow is an option that can be used instead that inflicts no penalty, but the fact that it only offers a +4 Attack/Speed boost only during Player Phase (as well as its limited availability) makes it a slightly less desirable choice.

For assists, Ardent Sacrifice is a must. It allows Spring Alfonse to activate Desperation after only being used once and synergizes well with  an HP bane. This enables him to perform consecutive attacks, which means he can quad without taking a hit in between the first two strikes. Combined with Luna, which will proc on the last hit, it’s exceedingly likely that any unit Spring Alfonse attacks will be KO’d unless they are a bulky red.

The C slot of this build is again variable. Spring Alfonse really needs a Hone Cavalry buff to function correctly, so it logically follows that he could and should support his allies in return. If (for some reason) this build is being run outside of a cavalry team, either of the Spd Wave skills can be run to boost Spring Alfonse's Spd further.

As one of the few axe cavalry units we’ve received in a fair while, Spring Alfonse finally has risen above his perpetual role as the lord of the bench. Sporting an improved 35/33 offensive statline along with cavalry movement and a fabulous outfit, Spring Alfonse directly outshines on units such as Frederick while competing with another popular axe cavalry option, Titania, only possessing one point of Speed less than her and a drastically higher Attack stat.

Furthermore, Spring Alfonse finally introduces the Giant Spoon, which is an axe with a Wo Dao effect (grants +10 damage when a Special triggers). While he can’t run Wrath due to inheritance restrictions, this weapon makes self-sustain builds and low cooldown Specials on Spring Alfonse much more feasible than they normally would be. Through raw stats, weaponry, and the power of tight pants alone, Spring Alfonse is a unit that no doubt will prove his worth, especially in a cavalry team. Now, if only regular Alfonse could do the same...

35/33 base Attack and Speed is great for a cavalry unit, and allows Spring Alfonse to both prefom and avoid consistent follow-ups.

Spring Alfonse is no defensive slouch either. 33 base Defense and 41 base HP allow him to take a physical hit if needed.

Even if his HP is reduced through a bane, that can easily be fixed through weapon refinement.

As of time of writing, there are only three other axe cavalry units, being Gunther, Frederick, and Titania.

Spring Alfonse’s offensive statline combines some of the best aspects of Frederick and Titania without compromising his defensive capabilities.

Although this could also be considered a strength, Spring Alfonse’s Resistance is his clear dump stat.

This normally wouldn’t be a bad thing, but the resurgence of dragons means that Spring Alfonse’s low Resistance may come back to bite him.

Among green cavalry, Spring Alfonse must compete with the likes of Gunnthrá, Valentine Lilina, and Cecilia.

These units either provide powerful utility or can run high-firepower Blade sets that Spring Alfonse may struggle to outpace.