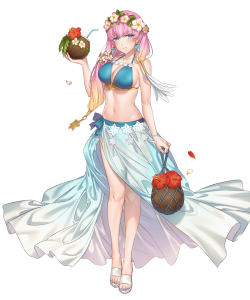 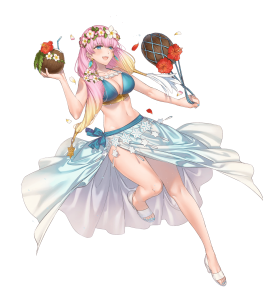 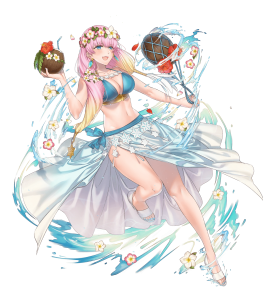 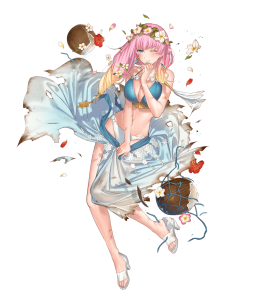 A standard offensive set that revolves around capitalizing on Summer Gunnthrá’s combination of good Attack and high Speed as well as her inherent strengths as a cavalry unit to transform the princess into a potent threat in the Player Phase. Since she will be highly reliant upon her ability to consistently perform follow-up attacks for her damage output, a Speed Asset is ideal, however, an Attack Asset may also be considered to augment her raw damage output and let her use the Heavy Blade seal to greater effect.

While offensive in nature, this build takes a vastly different approach to Summer Gunnthrá’s intended playstyle in comparison to the first, instead focusing on her unique typing as a colorless dagger cavalier to transform her into a strong check to specific unit types. A +ATK IV is her best option here as she will be dependent primarily on landing OHKOs to function.

The eldest princess of Nifl, Gunnthrá, makes a reappearance as a seasonal unit, this time wearing a tasteful summer attire perfect for passing the time at the beach. She comes in the form of a colorless dagger cavalier most directly comparable to her predecessor, Summer Linde, boasting strong offensive stats and relatively poor base defenses. Her unique weapon typing grants her a rather coveted niche, particularly in cavalry-exclusive team compositions, as her access to a plethora of effective-damage weaponry as a dagger unit combined with the statline and mobility to back it up enables her to be highly versatile in the way that she functions. When taken into consideration with her other inherent strengths, most notably her access to class-exclusive buffs, effective five-tile range, and a lack of color-disadvantaged match-ups, Summer Gunnthrá can undeniably be considered an incredibly powerful force to her own right.

Her weaknesses are similar to that of most offensive cavaliers. For instance, her overall bulk, while decent enough such that she can generally take at least one hit from an opposing foe, is still not very good and renders her markedly weak to any form of sustained offensive pressure; this also makes her severely reliant on the effects of skills like Desperation or playstyles contingent upon her ability to OHKO foes in order to engage in extended rounds of combat. Furthermore, as a cavalry unit, she is unable to benefit from access to powerful skills, such as Null Follow-Up and Sturdy Impact, travel directly on certain terrain, and carries a distinct disadvantage to any opponent wielding cavalry-effective weaponry.

Nonetheless, these weak weaknesses, while definitely restrictive, do not necessarily outweigh the impact of Summer Gunnthrá’s strengths. With smart play and careful management, Summer Gunnthrá can establish herself as a formidable and versatile offensive threat capable of finding her place both in and out of cavalry-exclusive compositions.

Summer Gunnthra’s fantastic offensive statline of 33/37 provides her with the means to perform as a highly effective offensive threat. When capitalized on with the proper build and support, the young princess can easily establish herself as a consistent source of damage output.

Summer Gunnthrá’s unique typing as a colorless dagger cavalier is a great boon in her favor, as her access to a wide breadth of various effective damage weapons allows her to built to cater towards one’s specific needs. This is especially beneficial when utilizing her in a cavalry setting where niche roles, such as dedicated anti-dragons, are not easily fulfilled.

Her status as a cavalry unit helps further cement her inherently considerable offensive capabilities. In addition to granting her an effective five-tile range, this enables Summer Gunnthrá to benefit from access to class-exclusive buffs which, when properly implemented, can let her maximize her damage output with relative ease.

While her overall bulk may not be extraordinary, it is sufficient enough such that she can generally tank a single hit from an opposing foe safely with the proper use of buffs.

Summer Gunnthra’s low defensive stats make her virtually incapable of taking on any form of sustained offensive pressure and render her functionality to exist solely in the Player Phase.

Although she is not as negatively impacted by terrain like trenches thanks to her being ranged, Summer Gunnthrá’s status as a cavalry unit remains a debilitating weakness, most notably due to it restricting her from gaining access to certain skills like Null Follow-Up and consequently limiting her overall potential dramatically. It also makes her quite susceptible to opponents wielding cavalry-effective weaponry.

With her native weapon and Spd and Atk Smoke, she grants a -7 debuff to all stats. This either completely cripples the enemy or negates a Gray Waves buff. Either way, it makes it easier to take them down.

LaD3 for damage so she can kill her first target, then her allies can clean up the other foes.

You can keep her Disarm Trap if you are using her in aether raids. Otherwise, use Desperation or, if you have it, Spd/Def lull.

I tend to use this in tandem with S!Lilina and B!Micaiah, but you can use her with anyone as a mass -7 debuff is very helpful.

Gunthrá&#039;s cavalry status gives her a better ability to pick of weak units who have been affected by Chill Def.With the bonus of odd attack and Atk/Spd Solo 3 gives her 60 plus her 45 spd gives her the ability to proc moonbow first turn of combat. After combat all enemies within 2 spaces of the target also get debuffed by 6 to each stat allowing her to most likely survive a hit

A straightforward build that is definitely a bit niche thanks to the weapon fodder requirement - if you have a spare HS!Elise and a +spd (or neutral spd) S!Gunnthra, the ducks are an exceptional choice for an all-rounder weapon as they can add a consistent +7 damage to her attacks. With a single merge, 2 dragonflowers, this seal, it’s easy to get her up to 56 spd on initiation with a hone - allowing her to flex the bonus damage on a great many units.

Her bulk is actually pretty surprising and she is generally easy to get into Desperation range thanks to this. Once there, she becomes a force to be reckoned with (those a pity she can’t equip the flashing blade seal :/ )

While this lacks the effective type damage of a Maiougi build, it’s surprisingly effective and allows her to hit hard and drop massive AoE debuffs on clustered groups of enemies - all while looking so stylish!