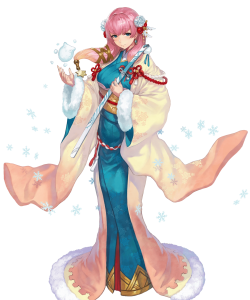 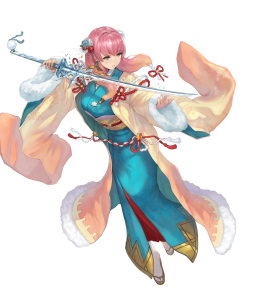 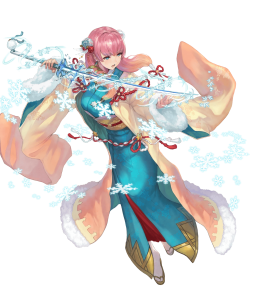 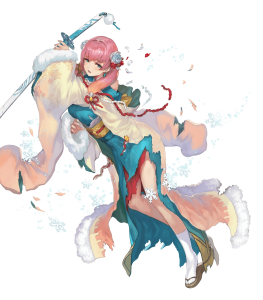 New Year Gunnthrá features a stellar capacity for debilitating foes via the revamped potency of her refined Hikami, being able to easily detract from an enemy’s statline by -14/14/14/6 through the ice sword’s cumulative effects in and out-of-combat; this is essential for the festive princess to keep pace with newer additions. Hikami also now borrows a core aspect of her original version’s kit through a “reverse” Blade tome effect (i.e. a flat Attack boost based on her foe’s total penalties), synergizing with her -6 visible stat debuff on nearby foes to instantly gain +24 Attack. Against foes unable to subvert such penalties, New Year Gunnthrá becomes a rather fierce offensive force.

Boasting a solid baseline Atk/Spd combination of 34/37, New Year Gunnthrá inherently sports workable combat prowess that is honed further by the potentially staggering stat superiority she can achieve through Hikami; while her bulk leaves much to be desired, she generally shouldn’t have trouble dealing damage or performing follow-up attacks once all her pieces come into play.

Being a flier comes with distinct advantages such as a marked lack of positioning and movement restrictions; this is particularly appreciated in New Year Gunnthrá’s case, as this allows for complete freedom in where to begin her turn so that Hikami’s debuffs can be applied on her desired foe. Additionally, her flying status enables access to an assortment of class-exclusive goodies like S/D Near Trace, Flow Guard, and Dive-Bomb for sharpened offensive performance, as well as several movement-based tools like Guidance for team support potential.

Neither of New Year Gunnthrá’s defensive stats is particularly great at base values of 27 and 26 respectively, and with only 38 HP to make up the difference, she relies almost entirely on Hikami’s Atk debuffs to trade blows with incoming enemies as she’ll otherwise face great difficulty in enduring sustained offensive pressure.

As a flier, New Year Gunnthrá is remarkably weak to bows and will quickly fall should she be left in range of an opposing archer — not to mention that while she’s certainly competent, non-flying contemporaries still bear an easier time in exceeding her potential given the flying class’s more limited skill availability.