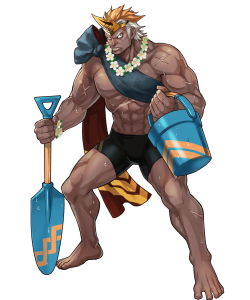 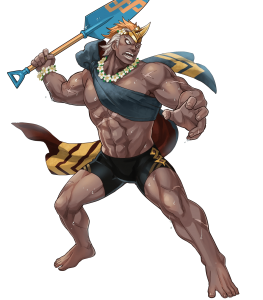 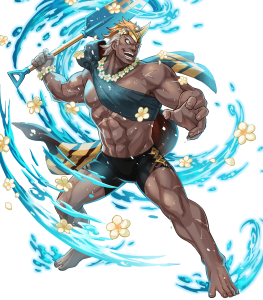 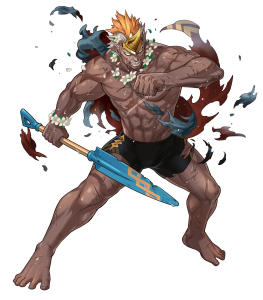 Helbindi is limited in his build versatility by his abysmal Speed, which makes it difficult for him to make use of mixed phase sets. Attack is his single best option, being optimal on all of Helbindi’s sets. Defense is a decent runner-up. Extra HP and Resistance do little to help Helbindi do his job.

Of course, a tank set is expected on Helbindi due to his high Defense, HP and Resistance. Although having low Speed makes it hard for Helbindi to avoid follow-up attacks from enemies, this set does a good job of keeping them at bay.

The Sandfort Spade is as good a weapon as any he can use, giving him a large boost to Defense (especially when refined) and a boost to his Attack as well. Bonfire is a great tool which turns his extreme Defense into a powerful counterattack, and allows Helbindi to attack on the player phase occasionally, provided it is charged.

Distant Counter is irreplaceable, and is important for letting Helbindi counter against archers and mages. Without it, he risks being quad-attacked by archers and doubled by mages. Fury is the best budget alternative, although it pales in comparison to Distant Counter.

Guard is also important, preventing enemies from charging their Specials. This is important, as most offensive enemies that Helbindi cannot OHKO are designed to activate their Special on their second attack. Quick Riposte completes the set, allowing Helbindi to attack twice, sometimes with Bonfire.

Once again, the other options on the set are flexible: Helbindi is a good candidate for running Speed boosters, as he does not need Speed himself. His naturally learned Rally Atk/Def+ is an excellent choice, although Swap is useful for increasing Helbindi’s movement range.

A set that makes full use of Helbindi’s awesome rockin’ muscles, and turns him into a deadly offensive threat. This is a good way to make use of Helbindi’s unique stat spread as he can trigger deadly Specials with his high Defense, and still get lots of mileage from his base 36 Attack, all while getting around his low Speed problem.

Brave Sword is mandatory, letting Helbindi attack twice despite his awful Speed. Helbindi wants to increase his Attack as much as possible, so Death Blow is the natural choice. Sturdy Impact is a worthy alternative, adding 8 damage to Helbindi’s Ignis.

Special Spiral and Heavy Blade serve to accelerate Helbindi’s Specials. Heavy Blade is a great choice, with a very high chance of activation thanks to Death Blow. In combination with Special Spiral, Helbindi can trigger a four turn Special. Chill Def is an acceptable alternative, but should be paired with a shorter Special, namely Glimmer.

Ignis lets Helbindi punch through even strong blue enemies, and is the primary Special of choice. The other options on the set are flexible: Helbindi is a good candidate for running Speed boosters, as he does not need Speed himself. His naturally learned Rally Atk/Def+ is an excellent choice, although Swap is useful for increasing Helbindi’s movement range.

As the only male summer unit featured on the Summer Returns banner, Helbindi brings the heat like no other. Unlike his regular form, Helbindi wields a sword instead of his trademark axe. His standout qualities include his great (except for Speed) statline, usefulness as fodder, and his awesome, rockin’ abs.

Helbindi is not your typical sword user. Possessing low Speed and high Defense make him an oddity amongst his peers. Having low Speed is Helbindi’s sole weakness, entirely defining him as a unit. Generally speaking, this lack of Speed makes Helbindi less viable than other sword users who can afford to run deadly mixed sets.

But aside from Speed, Helbindi has incredible stats across the board. He has a stellar base Attack, and plenty of survivability through his HP, Defense, and Resistance. Helbindi can be turned into a useful unit, but to do so he’ll need to take things to extreme either offensively or defensively.

Make no mistake, Helbindi’s base 36 Attack comes from his bulging muscles. Such high Attack is Helbindi’s saving grace, allowing him to deal heavy damage without needing to get a follow-up attack. It is also the largest contributor to Helbindi’s dangerous Brave Sword set.

Helbindi boasts a neutral total of 168 BST, almost the same given to armored units in early 2017. Although they aren’t as well-distributed as other units, those stats have to go somewhere. In Helbindi’s case, they give him great Defense, Resistance and HP. Helbindi is notoriously difficult to OHKO, and can often survive even two hits from opponents.

Lack of a personal weapon

With no personal weapon, Helbindi finds it difficult to carve his niche within the game. And as a seasonal unit it is unlikely he will ever receive one. These factors make Helbindi a questionable investment over sword wielders like Fir, Hana, and Masked Marth, all who can be brought to +10 much more easily and have strong personal weapons.